The Tyrolean Provincial Museum in Innsbruck , after the then Crown Prince Ferdinand (since 1835 Emperor Ferdinand I), who took over the protectorate, even Ferdinandeum called, was in 1823 under the name Tirolisches National Museum founded as an association. Archduke Johann was one of the initiators . The first, original museum building was created between 1842 and 1846 by Innsbruck city architect Anton Mutschlechner (1785–1846). This was expanded and rebuilt in 1884–1886. It is one of the five houses of the Tyrolean State Museums .

The Tyrolean State Museum was founded in 1823 as an association with the purpose of "promoting and sustainable development of art, culture, science and research" in Tyrol . In 2007, the newly founded Tiroler Landesmuseen-Betriebsgesellschaft mbH took over the operational business, which includes the Ferdinandeum and Armory,  the Folk Art Museum , the Court Church , the Tyrol Panorama with the Kaiserjägermuseum and the Tyrolean Folk Song Archive. Since then, the association, which has around 2700 members (2014), has been a partner and owner of the seven collections of the Ferdinandeum and the museum building together with the State of Tyrol. The company is led by Peter Assmann , who is also the director of the museum.

Draft for the original museum building by Anton Mutschlechner , 1842

The State Museum around 1888

The idea of ​​establishing a “patriotic museum for Tyrol” goes back to Archduke Johann , who  wanted to leave his private collections to the University of Innsbruck for teaching purposes, which was thwarted by the separation of Tyrol in the Peace of Pressburg in 1805. From 1821, Provincial Governor Karl Graf Chotek pursued the museum plans. On March 2, 1823, Emperor Franz I approved the establishment of a national museum, and on May 13, the provisional constituent general assembly of the museum association took place. Archduke Ferdinand took over the protectorate and agreed to the name "Ferdinandeum".

The collections were initially housed in rented rooms in Wilten Abbey and in the university building. In 1833, the museum's holdings included a library with 2,331 works and 600 documents, 280 oil paintings, 660 engraving and plastic works, 1,300 copper engravings and 2,200 hand drawings, mainly by Tyrolean artists. The increasing lack of space led to the first plans for a new museum building in 1838. The Governor's Garden (Kleiner Hofgarten) was initially considered as the location. In 1842, the general assembly decided to build the museum based on a design by Anton Mutschlechner in the so-called Angerzell, which was previously undeveloped. It was one of the first buildings in the newly created street, today's Museumstrasse. Archduke Johann opened the new building on May 15, 1845.

In 1867 there were initial considerations for enlargement, which was finally realized with the help of donations and subsidies from the Innsbrucker Sparkasse , the city of Innsbruck, the state parliament and Emperor Franz Joseph from 1882. Urban engineer Natale Tommasi designed the plan for adding a storey . In 1883 the first party was celebrated, in 1884 the renovation was largely completed. The vestibule was built in 1886/88. The initially unplastered facade was not completed until 1900. In 1909/10 the east wing was added according to plans by Eduard Klingler , and in 1927/28 the three-story west wing was added, which was expanded again in 1957/58.

After the separation of South Tyrol in 1919 , Italy laid claim to parts of the collections. Since the Ferdinandeum was organized as a private association, this was stopped by the Treaty of Saint Germain . Only a few items on loan from South Tyrol and Trentino had to be handed in.

In 1939 the museum escaped nationalization. It continued to exist as a club museum, but now under the supervision and administration of the Gauleiter . In 1940, however, the administration and the building were taken over by the Gau Tirol-Vorarlberg ; the collections remained with the museum association due to possible claims by Italy. During the Second World War , the collections initially remained in the museum; after the first bombing of German cities, it was planned to relocate them from 1942 onwards. The most valuable pieces first came to Ambras Castle and in 1944 to the abandoned Stams Abbey . Other collections were in Tratzberg Castle , Castle Sigmundsried , Castle Schneeberg , Burg Lichtenwerth , Friedberg Castle , Schloss Matzen and add castle housed. The geological and zoological collections remained in the museum. In an air raid on April 10, 1945, the entire roof, all halls and cabinets on the second floor east of the dome and parts of the first floor and the ground floor were destroyed. Reconstruction began in 1946 and was completed in 1949. In the course of 1946, all stocks that had been removed from the warehouse were returned.

For some time there were considerations that natural history collections in the armory to house. In 1959 it was handed over to the state by the federal government as the previous owner and then adapted. In 1969 a large exhibition about Emperor Maximilian I took place there, and in 1973 it was finally opened as a regional history museum.

On the occasion of the 175th anniversary in 1998, the Ferdinandeum was expanded and renovated. A new two-storey underground storage facility was built in the courtyard area, which was put into operation in 1999, and an extension building that connects the side wings on the courtyard side with a transverse tract and was completed in 2003. The old building was renovated inside and out.

Motive: Collection and Research Center of the Tyrolean State Museums

If you would like to help, the instructions explain how it works.
BW

In September 2017, the Collection and Research Center (SFZ) of the Tyrolean State Museums was opened in Hall in Tyrol with a floor area of ​​14,000 square meters. Since then, this has served as a depot for collection objects and as a workplace for carpentry and restoration activities.

The building, erected in 1842–1845 and extended in 1882–1884, is a monumental building in the neo-Renaissance style with a flat central risalit with a dome and a three-axis porch. The two sphinxes on the side of the vestibule were made by the sculptor Franz Baumgartner (1903). The three-storey main wing with the later built transverse wings encloses a rectangular courtyard. The middle part of the main wing projects semicircularly towards the courtyard and is covered with a dome.

The facade is crowned by a 3 meter high statue of Tyrolia , flanked by Minerva on the left and the Allegory of the Arts on the right. The group of sculptures was designed by Joseph Gasser von Valhorn and executed by Antonio Spagnoli.

The listed building is a typical example of the representative architectural style of the second half of the 19th century and is considered to be one of the highest quality museum buildings in Austria outside of Vienna.

The Tyrolean State Museum Ferdinandeum comprises seven collections; In addition to the actual Ferdinandeum in Museumstrasse, it also includes the Museum in the Armory (historical and technical collections on the cultural history of Tyrol) and the branch in Feldstrasse (scientific collections).

The natural science and humanities research activities of the house have been documented in the Scientific Yearbook of the Tyrolean State Museums since 2008 . It continues the older publications of the museum association:

The Historical Commission ( Technical Committee for History ), founded in 1907 and based in the Ferdinandeum, is the lead editor of the Tiroler Urkundenbuch , a text-critical edition of the oldest documented historical sources in the historical Tyrolean region.

Since the founding of the museum association in 1823, a so-called custodian has been in charge of the day-to-day operations of the museum. The growth of the collections necessitated the appointment of individual persons responsible for collections, who are also referred to as curators. A director heads the entire business. 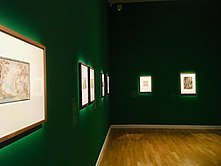 The graphics cabinet in the Dutch department