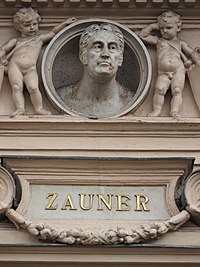 Zauner studied in Vienna, became a teacher in 1781, professor and councilor of the Vienna Academy in 1796 and director of the painting and sculpting class in 1806. On September 1, 1784, he was accepted into the Masonic lodge “ To the true harmony ” and, according to the Masonic patent, joined the lodge “To the truth”.

Equestrian statue of Joseph II on Josefsplatz in Vienna

His main works are the equestrian statue of Joseph II , for which in 1807 Emperor Franz I awarded him the nobility as " Edler von Falpetan", and the cenotaph of Leopold II in the Augustinian Church in Vienna. He also created the tomb of Field Marshal Laudon in Hadersdorf . Zauner worked particularly against the mannered being in the sculpture of his time and tried to initiate a deeper study of antiquity.

He was buried in the Catholic cemetery in Vienna - Matzleinsdorf (today: Waldmüllerpark ).

In 1894, the Zaunergasse in Vienna- Landstrasse (3rd district) was named after him.