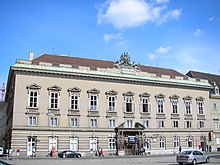 The Palais Pallavicini on Vienna's Josefsplatz

Coat of arms of those of Pallavicini on the cornice

Caryatids at the portal of the palace

The grand staircase in the palace

The Palais Pallavicini , also known as Palais Fries-Pallavicini , is a palace in downtown Vienna . It is located at Josefsplatz 5, across from the Hofburg library wing .

The Majoratshaus of the Counts Salm once stood on the site of the Palais Pallavicini . In the 16th century it was the property of the defender of Vienna, Count Niklas Salm . His brother Hector sold it in 1559 to Emperor Ferdinand I , who left it to his son Karl . When his niece Elisabeth , the wife of Charles IX. from France , when she returned to Vienna as a widow, she acquired the property and founded the royal women's or queen monastery in 1592 , of which she was the first abbess . After it was repealed by Emperor Joseph II in 1782, the individual building wings were divided up.

A part went to the banker and later imperial count Johann von Fries , who also bought the former Salm-Hofkirchner'sche house. In 1783/84 he had the individual buildings demolished and a new palace built for himself and his family in their place .

The palace is considered to be one of the main works of the architect Johann Ferdinand Hetzendorf von Hohenberg , the builder of the Gloriette von Schönbrunn . The rear part of the building facing Bräunerstraße was also built as an apartment building. At the time, the palace had the first purely classicist house front in Vienna. Contemporaries found the facade much too plain, mainly because the palace is in close proximity to the Hofburg . The facade was not structured in any way - jewelry was not even provided at the entrance portal. Vases should also be set up at regular intervals in front of the palace. This ran counter to the Baroque taste that was still prevalent at the time , which placed value on decorative centering on one point (e.g. the entrance portal of a palace). In response, the entrance portal was redesigned.

Both of the client's sons, Josef and Moritz I , were important art patrons . The picture gallery in the palace contained 300 paintings and more than 100,000 copperplate engravings. Here was a library of 16,000 volumes and an important collection of sculptures. The concerts and soirées that were held in the representative rooms were famous . The palace came into the possession of Baron Georg Simon von Sina in 1828 . Alphons Marchese Pallavicini bought it in 1842, whose descendants still live in it, but rent out most of the rooms. Two Viennese institutions have their headquarters here: the Wiener Rennverein and the Elmayer dance school in the former horse stable . In 1873, the interior of the building was redesigned under Margrave Alexander Pallavicini in the style of historicism , especially the staircase with Kaiserstein steps and the festival rooms.

After the collapse of the Fries banking house, the palace was acquired by Eduard Marchese Pallavicini in 1842, and most of the interior furnishings date from this period. The valuable Fries art collection, one of the largest and richest in Vienna, was auctioned off.

The palace was the site of numerous festivities with which the Pallavicini displayed their wealth. The contemporary Princess Nora Fugger described the palace in her biography: “But nobody should believe that I was thinking of all these certainly very interesting historical things when we - as always the last - entered the wonderful ballroom in the Palais Pallavicini. Margrave Sandor Pallavicini and his wife did the honors in the most gracious manner. Margravine Irma was one of the most impressive figures in Vienna. With her splendid family jewelry and her marvelous, junonic shape, she ebloated everyone who entered. The celebrations in the Palais on Josefsplatz were particularly popular. Everything was of a refined elegance. "

The building was also important in the 20th century: from 1939 until the instruments were brought in due to the war, it was the exhibition venue for the collection of old musical instruments and the venue for historical house music . In The Third Man , it's Harry Lime's home .

The classicist main facade on Josefsplatz looks very elegant precisely because of its simplicity. It is only structured by the eleven window axes. Above the banded ground floor are the mezzanine-like mezzanine and above the high windows of the lounge. Due to the poor architectural criticism, the client had the portal designed a bit more representative afterwards. Imperial Count Fries commissioned the sculptor Franz Anton von Zauner to add a caryatid portal and several attic figures.

It now has a blown gable supported by four powerful caryatids. They are a work by Franz Anton von Zauner from 1786. The four large vases envisaged here were placed in the park of Schloss Vöslau . The attic is adorned with a large Pallavicini coat of arms held by two seated allegorical figures. The representative staircase with its triumphal arch-like passage and the shell motifs of the stucco decorations was "modernized" in 1873. The rooms on the first floor are lavishly furnished with mirrors, tapestries , chandeliers and chimneys. The lavishly decorated ballroom in the neo-rococo style is particularly beautiful.