Moritz von Fries was the youngest son of Count Johann von Fries and Anne d'Escherny. From 1794 to 1797 he studied in Leipzig , supervised by the gallery director Lerse, Goethe's childhood friend . He increased the art collection put on by his brother Joseph von Fries (1765–1788), who died young, to more than 300 masterpieces (including works by Raffael, van Dyck, Rembrandt, Reni, Dürer); possessed an extensive collection of hand drawings, copperplate engravings, sculptures, coins and minerals as well as an extensive library.

Fries belonged to Ludwig van Beethoven's circle of friends , which he also supported financially. The composer dedicated the Violin Sonata in A minor, Op. 23 (1801), the Violin Sonata in F major, Op. 24 ("Spring Sonata ", 1802) and the 7th Symphony in A major, Op. 92 (1812) to Fries . Fries was also a generous patron of Franz Schubert .

The Fries family banking house, which his father Johann von Fries had founded, produced the Maria Theresa thaler in Vienna from 1752 to 1776 , which was legal tender until the 19th century, even in Africa and the Orient. The bankers Fries were among the most influential figures in Austrian high finance.

In 1773 the lordship and Vöslau Castle came into the possession of the Fries family and the rise of Bad Vöslau began . The Fries family had Johann Ferdinand Hetzendorf von Hohenberg , the court architect and creator of the Gloriette and the Schlosstheater in Schönbrunn, as well as the Fries'schen Stadtpalais on Vienna's Josefs-Platz ( Palais Pallavicini ) rebuilt to its present form. With Hetzendorf, the sculptor Franz Anton Zauner also came to Vöslau, from whom the putti on the portal of the castle park and in the staircase of the castle come. The architecture of the castle with the sculptures form an ensemble of early classical art that is rare for Austria. 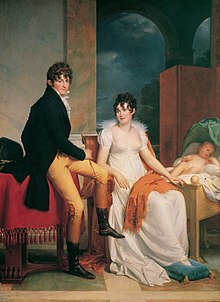 Count Moritz von Fries was married to Princess Maria Theresia zu Hohenlohe-Waldenburg-Schillingsfürst (1779-1819) for the first time since 1800 . A picture of the family was painted by François Gérard around 1805 and is now in the Belvedere in Vienna . In 1825 he married the dancer Fanny Munzenberg (1795–1869), with whom he had a daughter (Amalia Felicia), who was born in 1820.

By 1800 the assets of the Fries bank had risen to 2.5 million guilders , 80% of which belonged to Fries. Moritz von Fries was the richest man in the monarchy at the time. Even so, this great fortune was to be completely lost within a quarter of a century and ended in bankruptcy in April 1826 . The excessive living expenses of the family, the enormous expenses on the long trips, the great devaluation of money during the Napoleonic wars and other things resulted in the continuing decline of the banking house. In 1820 his share of the business had already sunk to 40%, the unstoppable decline led so far that he was removed from the banking business and his son was put at the head of the house, who, however, could no longer prevent the catastrophe. His significant collection of art treasures had to be auctioned to satisfy the creditors after the bankruptcy of the Fries bank. Count Moritz von Fries then went to Paris with his second wife, where he died just a few months later at the age of 49.