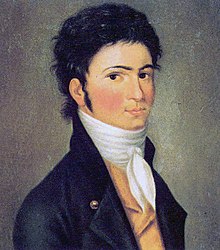 The Violin Sonata No. 4 in A minor, Op. 23 is a sonata for violin and piano by Ludwig van Beethoven .

The violin sonata op. 23, with its dramatic mood, forms a contrast to the cheerful “Spring Sonata” that was written at the same time. With both works, Beethoven finally leaves the level of casual music that up until then was accustomed to violin sonatas.

The first movement is of an extended implementation embossed, with 92 clocks the 71 clocks long exposure exceeds. She processes the main theme and the two motifs of transition. A revision of the main theme is heard in place of the expected recapitulation and again in the coda .

The Andante scherzoso più allegretto , laid out in the form of a sonata movement , only gains metric stability from the violin starting from bar 8. The transition is designed as a counterpoint .

The composer's sketches show that Beethoven worked out three drafts for the end of the sonata until he decided on the present, unconventional version.

Initially, both sonatas were published under the common opus number 23. The division between opus numbers 23 and 24 was presumably made when the violin part of the “Spring Sonata” was printed in landscape format instead of in the usual portrait format.

While both sonatas were still being published under the common opus number 23, the Allgemeine Musikische Zeitung certified both works that they were not "just a little spiced with a fleeting, new idea" and wrote:

Today the Violin Sonata op. 23 stands in the shadow of the “Spring Sonata”.