Stropp (from originally Strupf = "knot, loop", related: string ) is a nautical term for a short piece of rope with eyes or hooks at both ends (" rope "). Endless loops in which the ends are connected are also called round slings. 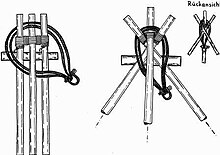 A strop on a tripod

Crew of the SMS Stosch at the Stropp game, approx. 1880

Stropps (plural also: Stroppen) are used, among other things, to attach sails to boat fittings or other parts of the rigging , to fix or connect objects on or below deck or as a loop around general cargo that is to be loaded by crane . Depending on the requirements, slings are made from fiber or wire rope and the ends of the eyes are spliced or, in the case of wire rope, industrially pressed.

Sails on boats and yachts are lashed with rubber stoppers after use so that the wind does not catch in them and blow them out (see also: Zeising )

In the past, the so-called "Stropp-Spiel" was one of the popular leisure activities of sailors at sea. Two sailors each took one end of the sling behind their necks, whoever could use it to pull the other over a recorded marking line had won.

In the Rhineland a little boy is called a stropp in dialect .