The Elmayer Dance School is a dance school in Vienna . It is headed by Thomas Schäfer-Elmayer . He was also responsible for opening the Vienna Life Ball and Philharmonic Ball .

Entrance to the Elmayer dance school

The Elmayer dance school was opened on November 19, 1919 in the former stables of Palais Pallavicini at Bräunerstrasse  13 in the 1st district of Vienna . The founder was the former kuk Rittmeister Willibald "Willy" Elmayer-Vestenbrugg (* May 27, 1885, † November 7, 1966, son of the kuk Feldmarschallleutnant Ludwig Elmayer, who on January 21, 1908 as "Edler von Vestenbrugg" was raised to the nobility had been).

Willy Elmayer-Vestenbrugg was a graduate of the Theresian Military Academy in Wiener Neustadt and was retired in 1905 as a lieutenant in the kuk Dragoon Regiment Emperor Franz No. 1 . After the First World War he was adjutant of the former colonel of the kuk Generalstabskorps Theodor Körner . Körner later became General of the Armed Forces, Mayor of Vienna and second Federal President of the Second Republic . In the Second World War, Elmayer-Vestenbrugg joined the Wehrmacht . In 1944 he was retired as a lieutenant colonel.

Willy Elmayer-Vestenbrugg, who remained childless, ran the dance school until his death in 1966. During this time, he managed to establish the institute as a “school for ballroom dancing and good behavior”. Hundreds of thousands of copies of his books Early Exercise ... , Good Behavior Asked Again and From Saddle to Dance Floor have been sold.

Since its premiere in 1935, it has been particularly closely connected to the Vienna Opera Ball, as Lieutenant Colonel Elmayer, the founder of the dance school, helped organize its premiere in 1935 and directed the opening of the newly built State Opera Responsible for opening by the youth committee. The rehearsal for the opening of the Vienna Corporations Ball was ended by the Elmayer dance school after a reference by the Jewish community to right-wing extremist tendencies at the “WKR Ball” in 2008. The Hofburg Ball "Elmayer-Kränzchen" of the Elmayer dance school with 3000 guests has been closing the ball season on Shrove Tuesday at midnight since 1920. 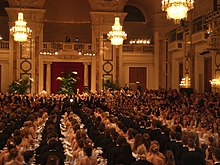 Ceremonial opening of the Elmayer crown in the Vienna Hofburg on February 21, 2007

Correct behavior is particularly important in the courses. For example, at the end of the dance class, men say goodbye to their dance partner with a kiss on the hand . In addition to the dance courses, the dance school also offers etiquette courses .

There is a strict dress code compared to other dance schools. For men, suits or jackets with matching trousers, shirts with ties or knits and white twisted gloves are compulsory in the youth courses. A dress, skirt and blouse or a trouser suit are required for women.

The dance school leads one Viennese waltz, three Latin and one standard formation, which dance at various balls, celebrations, openings or midnight performances.