The first editions of works that have achieved a certain level of awareness are regularly highly valued .

The aim of the edition is to provide the reader with a trustworthy text. To this end, the editor has to make a series of editorial decisions, which consist in determining the relationship between the text he has edited and its respective original. Template in this sense is z. B. the manuscript or the typescript of the author or an older text version already in printed form. The publisher can e.g. B. update the spelling of his original, modernize the use of language or - vice versa - he can opt for a faithful reproduction of his original, perhaps even a facsimile edition. This can be particularly complicated, especially with older texts that are available in multiple versions or variants.

Professional editors justify their decisions in the so-called editorial note (also called “editorial report”); this is mandatory for scientific editions. Historical-critical editions also document and evaluate all variants and preliminary texts of a work.

In addition to organizing the printing or the publication as electronic publication of such works, other activities also belong to the work of a (publishing) editor :

Editions in the humanities 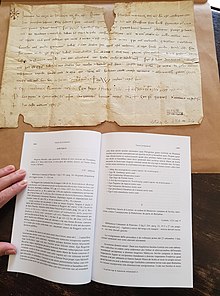 A Dating back to the 12th century deed and its Edition by Horst Enzensberger .

In the philological and academic sense, an edition is an attempt to restore either the original text or the text intended by the original author by critically comparing prints and manuscripts and, if necessary, of materials left behind by the author ( textual criticism , therefore also “critical edition “); or to present a historically effective text, which may differ widely from the author's intention, in its context, with references to reception . There are, for example, key manuscripts that represent a version of the text and that were most effective, although they can differ widely from the "original". As a rule, a scientific edition contains references to sources used by the author. In addition, a factual comment is often added to the respective work.

In historical studies, archival sources are made accessible through source editions and thus made accessible to a larger group of researchers. Depending on the material available, a distinction is made between document, file and letter editions. Often, however, texts from different types of sources on one topic are also combined in one edition. The source texts can be published as full text, in excerpts or as regest .

When reproducing texts, one can orientate oneself on edition guidelines, e.g. the recommendations for the edition of early modern texts from 1980.

At the beginning of the 1990s David C. Greetham asked whether the structure of a traditional edition of works in the distinction between "authorized" and "less important" parts of text conglomerates might not be indicative of patriarchal, elitist and even racist attitudes. David Adams summarized in 2010 that Greetham brought to light in further work how much theoretical actions behind the work on texts are filled with ideological assumptions that form an edition and convey a certain set of ideas to the reader.

Term in other contexts

Some publishers also use the term Edition in their name.

The edit of works is different from the editing , which in English ( to edit like) has the same meaning editing has, and professions such as publishing editor , editor , film editor communicates. In the course of digital text processing (e.g. Wikipedia) and EDP (e.g. entering, changing, deleting data in a terminal), editing has also become established in German.

When software is released, one speaks of versions rather than individual issues .