The ruins of Moregg Castle are located in the municipality of Obersaxen in the Swiss canton of Graubünden .

The ruins of the Spornburg are at 1250  m above sea level. M. west of Surcoulm or east of the hamlet Egga on a rocky mountain spur. The facility can be easily reached in a few minutes from the driveway on a narrow path through a small Bachtobel. 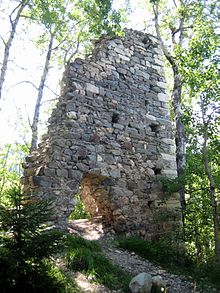 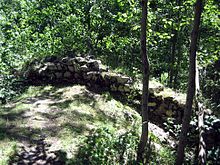 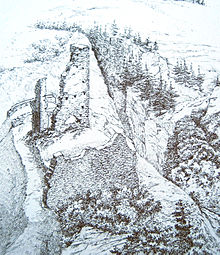 In Obersaxen, German-speaking settlers advanced into a Rhaeto-Romanic area in which there were probably already castles. Since the name of a knightly dynasty does not appear on any of the four castles, it can be assumed that the castle name was simply formed from the name of the settler to whose area the crumbling castle belonged.

The name Moregg appears in 1573 with Ulrich Campell as Moreccium, in 1617 with Fortunat Sprecher as Moreck and in 1742 with Nicolin Sererhard as Morek . Most likely, an origin from the personal or nickname (Mohr, Schwarzer) comes into question. The originally Low German word moor has only been used in New High German since the 17th century and is therefore out of the question as an explanation of the name.

In the center of the complex is a rectangular keep , from which a wall corner up to a height of three stories has been preserved. The dimensions are 10.8 by 9 meters with a wall thickness of 1.5 meters. The bright corner stones with bosses and edging are striking . Inside and outside there are traces of an older Pietra Rasa and a younger smooth plaster. Remnants of a high entrance on the second floor, as seen by Poeschel in the late 1920s, have disappeared. From Bering has been preserved on the west side just above the rock crash a seven-meter-high piece. Traces of a gate or other buildings are not visible.

There are no written documents about the origins and history of the castle. In 1468, however, when Jo Niclaus von Zollern and Jörg Schenk agreed on the legacy of the Rhäzünser, the guot Moreck was mentioned; hence the Moreck estate and castle were probably Rhäzünsisch. When in the middle of the 14th century the Walsers who settled there received low jurisdiction, the presence of the Rhäzünser ministerials was no longer necessary and Moregg was left.