Baldenstein Castle from the south

The Baldenstein Castle is a castle north of the municipality of Sils im Domleschg , in the canton of Grisons . The name is derived from the Middle High German word bald (= bold, daring), which indicates the location of the castle.

The castle is about 1 km north of the confluence of the Albula and Hinterrhein on a spur. To the north, the terrain slopes steeply towards the Albula, and access is from the south. The original topography was changed by terracing and gardens.

The current state is based on the restoration after a fire in 1877. Of the complex that is visible today, only the four-storey tower probably dates from the Middle Ages. When it was built in the first half of the 13th century, it was isolated. The wall thickness of the building is up to 2.1 meters. On the west side at the level of the third floor was the high entrance , on the east side of the fourth floor an exit led to an arbor. The windows were only added later. 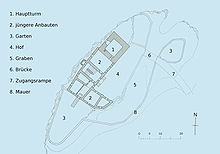 The residential wing that adjoins the tower in the west dates from the 16th and 17th centuries and probably replaced an older building. The high retaining wall with the battlements dates from the early modern period, but its course probably follows a medieval ring . The gardens date from the 17th and 18th centuries. In 1877 the castle was partially destroyed by fire. The current state with neo-Gothic elements and stepped gables dates from the period after 1877. 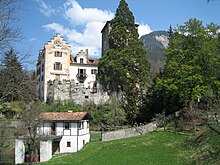 From the builders, the Lords of Baldenstein, an Ebo von Baldenstein is mentioned in the documents between 1246 and 1252. In 1289 the castle was owned by the lords of Löwenstein von Ilanz , but later came in a feud through a coup d'état to the barons of Rhäzüns . In the peace of 1289 Hartwig von Löwenstein got Baldenstein back from the Rhäzünsern, but had to surrender Schwarzenstein Castle near Obersaxen .

Baldenstein came into the possession of the von Übercastel family, who are related to the Löwensteiners, probably through an inheritance. A dispute between Wilhelm von Übercastel and the Bishop of Chur about the Burgstal and the bûwe ze Baldenstein was settled in 1349. Wilhelm was allowed to build and had to grant the bishop the right of first refusal to Baldenstein. In addition, the castle was not allowed to be used against Chur.

The next owners of Baldenstein were the Lords of Stein; 1400 a Wilhelm von Stein is proven. The bishop had waived his right of first refusal, but enforced that the castle must be open to him at all times. In any case, in the episcopal «Buoch der Vestinen» of 1410, Baldenstein is mentioned as an open house . As a result, a castle could be drawn into one's own sphere of influence without having to be acquired.

Bridge to the entrance

In 1562, Luzius Ringg von Baldenstein sold the castle to the noble Jakob Ruinelli from Valtellina . After the last Baldensteiner Jakob Ruinelli was stabbed to death by Jörg Jenatsch in a dispute between officers in 1627, the castle came to Colonel Christoph Rosenroll von Thusis in 1627 through the marriage of Ruinelli's sister Perpetua .

Again by marriage in 1716 Baldenstein came to Vincenz von Salis , captain in the Spanish service, whose son sold it in 1782 to the silkworm breeder Francesco Conrad (1753-1821) from Chiavenna . His son, the naturalist Thomas Conrad von Baldenstein , was born there in 1784 and spent most of his life there. Today the Baldenstein Castle is still owned by the Conrad von Baldenstein Family Foundation. 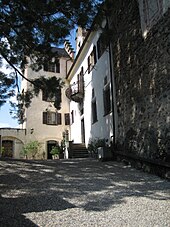