The stepped gable of the Roman in Frankfurt am Main

Guild houses with step and volute gables on Graslei in Ghent (Belgium). In the middle: the Korenstapelhuis or Spijker from the 12th century 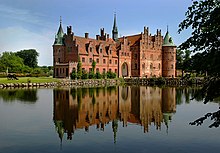 The earliest examples were in Romanesque architecture in Flanders ( Belgium ) in the 12th century , then in the Rhineland in the 13th century . The Romanesque house on Graslei in Ghent , called Korenstapelhuis or Spijker, which dates from the late 12th century, may have the oldest staggered gable still in existence. The Overstolzenhaus in Cologne is one of the few Romanesque buildings with a stepped gable. In the Gothic period , the stepped gable was particularly widespread in northern Germany and the area of ​​the Teutonic Order and in Denmark , but also in the Dutch - Flemish area and further south from southwest Germany to Bohemia . Above all, representative secular buildings were provided with stepped gables, as well as some naves in the Baltic Sea region and some church towers in Swabia. In Poland, no fewer churches than secular buildings have stepped and volute gables. There, in secular architecture, it was preferred to use decorated horizontal façades, known as the Polish Attica . In the late 16th and early 17th centuries, some Scottish mansions and castles with stepped gables were also built.

Brick Gothic civil buildings as well as works of the brick renaissance and the Weser renaissance are not to be thought without stepped gables .

On the Baar , the poorly forested east side of the Black Forest massif , there are numerous farmhouses with stepped gables.

The steps were occasionally decorated with blind arches , friezes , tracery or battlements . These decorations can still protrude over the stepped wall end in the form of a tracery crown, or the steps protruding over the sloping roof can be perforated with round ("wind holes") or window-shaped openings ("wind" or "air windows").

In the architecture of the Renaissance and even more so in the Baroque , the stepped gable was further developed into the volute gable with the use of helical ornaments ( volutes ) and other contemporary decorative elements .

In the Baroque period, the ornamental gables towering over the roof were popular not only in northern Germany, but also in the Netherlands, Flanders, southern Germany and Bohemia. Instead of many steps, often only a few, sometimes a single pair, with huge volutes were built .

There are also triangular gables with individual tiers, often in combination, but which do not form a connected staircase:

In addition to stepped gables with volute decorations, there are also volute gables in which volutes replace the steps or the entire bevel of the gable is designed as a single volute. In the German and Dutch-speaking areas, volute gables are known on town houses in densely built-up old towns. The development of the volute gable coincided with the development of supremacy in the West and the establishment of European branches worldwide. Churches with volute gables were built around the world. The use of volute gables found no interruption from Renaissance architecture to historicism and the Art Nouveau of the industrial age.