This article covers the city in the Dutch province of North Holland. For the Dutch jazz musician, see Joe van Enkhuizen .

Enkhuizen ( listen ? / I ) ( West Frisian Henkhúze ) is a municipality in the north of the Dutch province of North Holland in the West Friesland region . The places Oosterdijk and Westeinde also belong to Enkhuizen.

Enkhuizen is a popular port for excursions in the western part of the IJsselmeer . In the summer months there are also regular boat connections to Stavoren and Urk . The city has a railway connection with Amsterdam via Hoorn , Purmerend and Zaanstad . A road leads to Lelystad over the Markerwaarddeich ( Houtribdijk ), which separates the IJsselmeer from the Markermeer .

For the Enkhuiz economy, fishing is no longer important, in contrast to tourism (water sports, city center). The agriculture of the area is also important, in addition to the cultivation of cabbage and other vegetables, ornamental flowers and plants are grown , the seeds of which are widely traded.

Around the year 1000 there was already a settlement here. In 1296, the already important village of Enkhuizen was partly burned down in a dispute that cost Count Floris V his life. The place received city rights in 1355. In the Middle Ages it was the starting point for disputes between the Frisians , the Dutch and the Duchy of Geldern several times . Enkhuizen developed into an important center of the herring fishery ; new harbors were built and around 1600 300 of Holland's 500 herring vessels were active from Enkhuizen. When the Dutch East India Company was established in 1603 , Enkhuizen was also involved. At the end of its heyday in 1652, Enkhuizen was a big city with over 25,000 inhabitants for the time. The actual city center was larger at that time: the Kuhtor and remains of the city walls are in an area that is now part of the outer quarter.

The cause of the subsequent relapse was the increasing trade competition at home (Amsterdam) and abroad (England). Like Monnickendam , Edam , Hoorn and Medemblik , Enkhuizen became one of the so-called “dead” cities on the Zuidersee. Only with the advent of horticulture and tourism around 1900 did the community recover. Today, the city benefits primarily from water tourism in the summer months.

The Enkhuizen Jazz Festival has been held in the historic old town of Enkhuizen since 1974. It takes place on the first weekend in June and lasts four days. 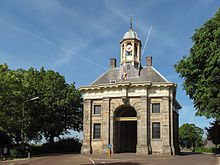 People who worked in Enkhuizen

Municipalities of the province of Noord-Holland