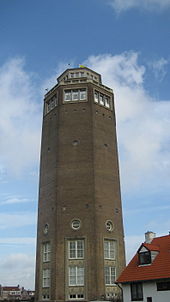 Zandvoort ( listen ? / I , pronunciation : [ ˈzɑntfoːrt ]) is a Dutch municipality in the province of North Holland . Zandvoort lives mainly from tourism.

The place is located in an extensive dune area directly on the Dutch west coast. In the south, the Amsterdamse Waterleidingduinen border the place; drinking water is obtained there for the city of Amsterdam . At the same time, the area is used for recreation. In the north, the Zuid Kennemerland National Park stretches to IJmuiden .

Beginnings as a fishing village

Zandvoort was already known around 1100 and was then still called Sandevoerde; the name was composed of sand and Voorde ( ford ). Until 1722 the whole area was under the rule of the Heren van Brederode . For centuries the village lived from fishing. The boats landed on the shallow beach and the fish were brought from there to the Haarlem market. The expansion of the port in neighboring IJmuiden as part of the construction of the North Sea Canal accelerated the decline of the Zandvoort fishing industry. The residents began to grow potatoes in the dunes.

Development into a seaside resort

Beach tourism soon became the most important new source of income. The first bathhouse was opened in 1828 . In Great Britain, seaside bathing emerged as a healing and relaxation method and the Zandvoort doctor Metzger introduced its use in Zandvoort. Several personalities visited the place. The Empress Sisi of Austria came here to relax in 1884 and 1885 and received physiotherapy from Metzger . Painters like the realist Fritz von Uhde found their motifs in Zandvoort and captured the lives of ordinary people in their pictures.

Tourism has developed particularly since Zandvoort was connected to the Dutch rail network in 1881 and a tram connection with Haarlem followed in 1899 . Magnificent hotel buildings and luxury villas were built during this time. From 1881 a shopping arcade connected the train station with a spa house on the beach. Zandvoort was connected to the water supply network in 1912 and the first water tower was built the following year.

During the 1930s, Zandvoort had the highest percentage of members of the NSB in the country - the then Dutch National Socialist Movement. The Second World War caused a lot of damage in Zandvoort. On May 23, 1942, access to the beach was forbidden and almost all of Zandvoort was cleared a short time later. Bathhouses and boulevards had to give way to the German Atlantic Wall . In 1943 the water tower was blown up. The place was surrounded by a concrete wall and there are still many bunkers around Zandvoort .

Development after the war

After the war, many apartments were built and tourism increased sharply. In 1948 the Circuit Park Zandvoort - a motorsport racing track - was laid out. In 1952, today's widely visible water tower was inaugurated. In 1957 the tram service to Amsterdam (via Haarlem) was stopped. The many high-rise buildings, some of them prefabricated buildings , which were built for tourists, but also for residents, have largely displaced the typically Dutch architectural style of the place. In some side streets there are still remnants of the old fishing village and there are some splendid Art Nouveau villas on the arterial roads . The town center and the beach boulevard are today characterized by restaurants, small shops and a casino.

Tourism has a major impact on the municipality's economy , especially in the high season . In 2003 almost half of all jobs in Zandvoort were related to tourism. There are hotels, pensions and other accommodations throughout the village. Many of them were created during the building boom in the 1950s and 60s. The Center Parc (formerly Sunparks) is also a great attraction for tourism.

On the beach pavilions and cafes invite bathers. There is a three-kilometer-long nudist zone in the southern beach area. Many Dutch families spend their weekends and holidays in beach bungalows , also called beach houses , just a few meters from the sea. Some of these houses have been owned by the same family for generations. The season starts at Easter and ends in October. Then the houses are loaded onto trucks and stored in the area of ​​the Zandvoort race track in a safe place for winter, as the storms are too violent for the wooden houses. 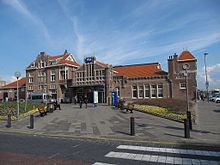 Stop of a regional train

From 1895 there was a tram connection to Haarlem and Amsterdam. This was closed in 1957. The final stop was in the center of the village.

The normal-gauge railway line, which has been in service since 1881, leads up to 200 meters from the beach. The passenger trains run to Amsterdam via Haarlem.

David Moolenburgh ( CDA ) has been the acting mayor of the municipality since September 19, 2019 . His colleagues include the alderman Gerard Kuipers ( D66 ), Gert-Jan Bluijs ( CDA ), Gert Toonen ( PvdA ) and the municipal secretary Anky Griekspoor-Verdurmen.

Municipalities of the province of Noord-Holland