Viticulture in Austria is carried out on an area of ​​48,721 ha. 65.7% of it is planted with white, 34.3% with red grape varieties . Of just under 20,200 companies (in 1999 there were over 32,000) only 6,500 bottle themselves. An annual average of 2.3 million hectoliters of wine are produced, the majority of which is consumed in Germany. The production of table grapes only plays a very subordinate role in Austria .

Viticulture in the south of Styria

The Austrian wine banderole, mandatory for all Austrian quality wines since 1985.

The oldest grape seed finds were made on the Hundssteig in Krems an der Donau . These seeds from Vitis sylvestris (wild grapevine) date from 3000 BC. BC, most likely they were collected in the floodplain forests. The same applies to the vines found in Nussdorf ob der Traisen from the time 2000 BC. Come from BC. But there is no evidence that wine was made during this period. This also applies to those Rebkerne of Vitis vinifera ( Kulturrebe ), which in Stillfried - a cadastral of Angern an der March - have been found. They date from the time 900 BC. BC and are therefore the oldest Vitis vinifera vines found in Central Europe and Austria . They probably come from imported dried berries from the Balkans. It is possible that these vines were propagated and spread locally. The same applies to the vines from a hill grave near Zagersdorf in Burgenland . They date from around 700 BC. Chr., References, objects and facilities for wine production are missing. Rather, in the Hallstatt and Latène times, vines were used as grave goods, which suggests their appreciation of the people living at the time.

Roman provinces and places on the territory of today's Austria

Most of what is now Austria was founded around 15 BC. Incorporated into the Roman Empire . During his reign (41–54 AD), the Roman Emperor Claudius set up the Roman province of Noricum , its borders in the north to the Danube, in the northeast to the Vienna Woods , in the east roughly along today's eastern Styrian border and in the southeast and south beyond Eisack and Drau . With the Romans, viticulture quickly spread in the provinces of Noricum and Pannonia . Cassius Dio , Roman senator , consul , writer and historian , was, among other things, governor of Pannonia and Dalmatia and described the quality of Pannonian viticulture as poor.

Despite the short reign of the Roman emperor Probus (276–282), in some regions he is now one of the Roman emperors known to laypeople. This comes from a message in the Probus biography of the Historia Augusta , where it says in chapter 18.8: “ Gallis omnibus et Hispanis ac Brittannis hinc permisit, ut vites haberent vinumque conficerent. "(" He allowed all Gauls, Spaniards and British to own vines and produce wine. ") Therefore, Probus is considered to be the one who introduced viticulture there in numerous wine-growing areas north of the Alps (such as in Austria and on the Moselle in Germany) . What is certain is that wine production in these regions gained significantly in importance after the middle of the 3rd century.

In 470, according to the Vita Sancti Severini written by 511 , the biography of Severin von Noricum by Eugippius, vineyards near Mautern were mentioned. The discovery of a vintner's knife in Lauriacum , a Roman settlement in the area of Lorch , a district of today's Enns in Upper Austria, is also considered evidence of early viticulture at the time of the Romans.

The migration of peoples sealed the decline of Roman power, and in 476 the Western Roman Empire finally collapsed. Numerous raids on the Pannonian Plain negatively influenced the further development of viticulture.

The fortified church of St. Michael , which has belonged to the Thal Wachau area since 1280

Reconstructed temperature course of the last 2000 years according to various sources, in comparison with the directly measured temperatures up to and including 2004

Title page of the book "Viticulture" by Johann Rasch , reprint of the edition from around 1580, Renate Schoene - Society for the History of Wine

The Babenberg Heinrich II "Jasomirgott" raised Vienna to his residence in 1145 and thus strengthened viticulture in Vienna . The cultivation was not limited to the Nussberg and the Bisamberg . Today's 3rd and 4th district, Landstrasse and Wieden consisted mainly of vineyards. A city map from 1547 still shows the viticulture around the Vienna Minorite Church .

The nobility and the bourgeoisie tried early on to soften the wine monopoly of the rulers and the church. The first documented purchase of three vineyards by the Viennese citizen Reingerus dates back to 1170.

The major monasteries of the Austrian and Bavarian Alps space built from the 11th to the 13th century many agricultural depots as Göttweig , Stift Klosterneuburg , Zwettl , Stift Melk , Lilienfeld and Heiligenkreuz . In 1250, under the name Thal Wachau, a lordship and a district administration with the current cadastral communities of Joching, St. Michael, Wösendorf in the Wachau and Weißenkirchen in the Wachau were founded. In the meantime, the cadastral communities have been combined to form the market town of Weißenkirchen in the Wachau .

On March 21, 1359, Duke Rudolf IV , "the founder", introduced a beverage tax, known as Ungeld , throughout the Duchy . Later came the mountain decade the mining law stripping the landlord and various customs and tolls for transit of cities and regions.

Wine production and wine consumption reached an absolute climax during the Medieval Warm Period , as in the entire Holy Roman Empire . In Central Europe, the temperature was around 1 ° C warmer than during the penultimate CLINO period (1961–1990). The cultivation borders in the low mountain ranges north of the Alps reached about 200 m higher than at present, so that the cultural landscape experienced its greatest expansion in the High Middle Ages . The vineyards were then about ten times as extensive as they are today. There were also significant vineyards in Salzburg , Upper Austria , North Tyrol and Carinthia .

On February 3rd, 1447 the Hauerinnung Krems-Stein was founded. It is the oldest still active tusk guild in German-speaking countries.

Around 1580 Johann Rasch (* in or around 1540 in Pöchlarn ; † 1612 in Vienna ) wrote the first “wine book”. It is the oldest book on viticulture. It contains rules and practical suggestions for winemakers, tusks, landlords and house fathers and legal regulations against slipping and the like. a.

Viticulture was given a new boost through a circular ordinance issued by Emperor Joseph II in 1784, which confirmed the right to serve wine taverns . The phylloxera disaster from 1867 and fungal diseases devastated large parts of the country's vineyards. As in all of Europe, the crisis was only overcome through the use of American rootstock . The Klosterneuburg Viticulture School , founded in 1860, was one of the first in the world. The Krems viticulture school was founded 15 years later. In the first decades of the 20th century, the grape varieties Zweigelt , Blauburger , Goldburger and the Jubilee vine were bred at the Klosterneuburg Wine School .

In 1985, the glycol wine scandal shook the entire wine world when it became known that some Austrian winemakers were illegally adding diethylene glycol to their wine to give simple wines more body. However, this scandal became a "catalyst" for the development of quality Austrian viticulture. A wine law, the strictest in the European wine world at the time, was passed.

Grape juice that is still fermenting is referred to as a storm . Unlike the sweet cider , which is mostly very popular depending on the region , this is already a more or less strongly alcoholic drink. Sturm only comes onto the market for a short time and in open bottles that are mostly loosely closed with a film. If the fermentation slowly ends, the resulting unfiltered wine is called "dusty".

The young wine is traditionally “baptized” with Martini (on November 11th ) and thus with the “Heuriger”, which by law can still be called this until December 31st of the following year; after that he becomes compulsorily “old”. In Styria , the word Junker is also used for such young wine and is protected as the name Steirischer Junker .

In Austria, heuriger refers notonly to the aforementioned wine but also to the Buschenschank that sells it. This meaning of the word, which originally expressed the self-marketing of the young wine by the winemaker , is not protected by law, so that every restaurant can call itself a “Heuriger”.

Quality levels according to the Austrian Wine Law

In Austria, the production volume of wine of the quality level quality and predicate wines is well above the other levels.

Since 2003 there have also been region-specific quality wines in Austria, the DAC wines. A DAC ( Districtus Austriae Controllatus ) is a quality wine that is particularly typical of the region from a specific growing area. So-called interprofessional or regional wine committees decide which varieties are permitted and which specific quality requirements are placed on the DAC.

So far, the following 15 DAC areas have been defined in Austria by ministry ordinance (chronological order after their introduction):

In addition, there are some local names that are not regulated by law:

The following table lists all 22 white and 13 red grape varieties that are permitted in Austria for the production of quality and predicate wines. All percentages are based on the white or red vine area. 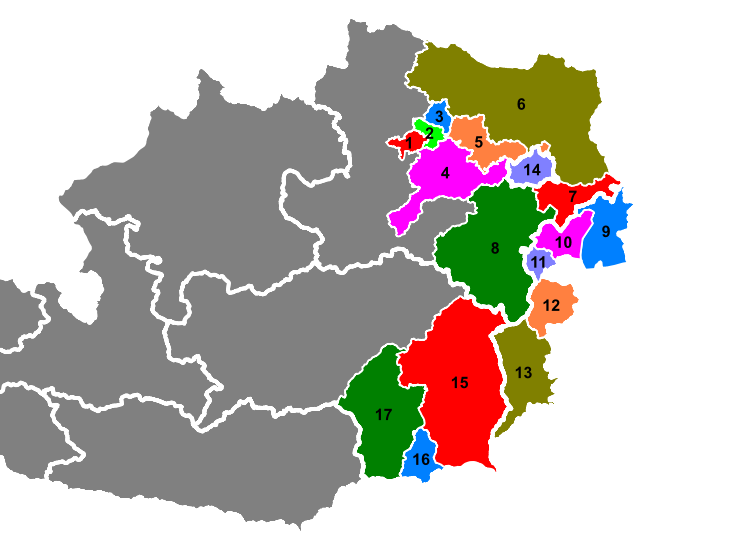 Wine landscape in front of the Senftenberg castle ruins (Kremstal)

View from the vine-covered Heiligenstein (Kamptal) 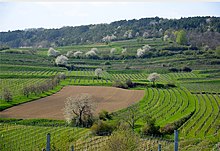 Weingarten near Kirchberg am Wagram (Wagram)

The Neusiedler See with the surrounding cultural landscape (Neusiedlersee)

Vineyards on the Kadoltsberg in the Vienna Wall (Vienna)

The Vienna wine-growing region lies within the city limits. The cultivation area of ​​a good 557 ha corresponds to 1.2% of the total vineyard area and makes Vienna the only capital in the world with significant wine production, with the city of Vienna itself also maintaining a winery. The mixed set is a regional specialty , in contrast to the cuvée , different grape varieties are processed together into wine after the harvest .

The vineyards are usually located on steep slopes at an altitude of up to 700  m above sea level. A. The weather is slightly continental, warm in summer and moderately cold in winter. On average, there is about 1000 mm of precipitation per year. This climate makes Styria a white wine country. About 2400 hectares of vineyards are planted with white vines. The most important grape varieties are the Welschriesling (670 ha) and the Pinot Blanc (570 ha). The red grape varieties are dominated by the Blaue Wildbacher (Schilcher grape ) and the Zweigelt . A specialty of Styria is the Steirischer Junker , a dry young wine that comes onto the market in the year of harvest. The term "Steirischer Junker" is a protected wine brand.

Wine landscape in the Schilcherland in the Voitsberg district ( West Styria )

The Schilcher is specially protected by law and may only be obtained from the Blauer Wildbacher vine as rosé, which is why western Styria is of particular importance as the main growing area for this variety.

The cultivation areas of the five federal states of Carinthia , Upper Austria , Salzburg , Tyrol and Vorarlberg are combined in this region . With a total of 139 ha (174 holdings), these play a subordinate role.

Since, on the one hand, around 40,000 tons of table grapes are imported, but only a small part is produced in the country, attempts were made in 2010 to increase the cultivation of these grape varieties, especially in the Weinviertel. For the first time 11.5 hectares were planted by 13 winemakers.

Since viticulture has a great tradition in Austria, it is also linked to an old tradition that is still cultivated in many areas today.

For example, around November 11th ( Martini Day ), the young wine is baptized , which is actually a blessing . Prominent sponsors give the wine a resounding name.

Also, harvest festivals are celebrated in the wine. The Perchtoldsdorfer Hütereinzug is considered to be the largest harvest festival in Eastern Austria, which , due to its old tradition, was placed under protection by the Austrian UNESCO Commission as intangible cultural heritage in Austria in 2010.