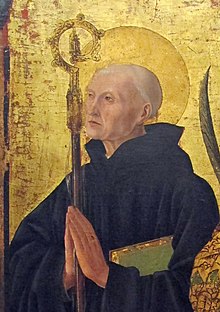 Severin von Noricum (Severinus; * around 410; † January 8, 482 in Favianis , probably today's Mautern an der Donau ) was a late antique saint , missionary and founder of a monastery in Noricum . Eugippius reports on his life in a "memorial book" ( Commemoratorium ), which is known under the title Vita sancti Severini ("The life of St. Severin").

The Porta Sancti Severini (west gate) of the St. Laurence Basilica in Lorch with depictions from the legend of Severin (based on a design by Peter Dimmel , Linz)

Today's knowledge of Severin's life and of the social and ecclesiastical conditions in his area of ​​activity comes from the biography of the saint, which Eugippius, the abbot of one of his monasteries, wrote in 511. This biography of the saints - again and again it is about miracles such as prophecies, healings or an increase in oil - is the only narrative source from the time of the declining Roman rule in Bavaria and later Austria . It provides valuable socio-historical information, but its credibility is sometimes viewed with skepticism in research. The information about the withdrawal of the Romans from the Noricum is likely to be exaggerated; Today it is no longer assumed that - as was previously assumed based on the representation of Eugippius - there was a complete withdrawal of the provincial population.

Little is known about Severin's ancestry. As Eugippius reports, his language proved him to be “an entirely Latin man”. From this and from other evidence it can be concluded that Severin came from Italy and that his family belonged to an elegant, educated class. Maybe he was of senatorial origin. Since he refused to provide information about his descent out of modesty, it can be assumed that he came from the political ruling class. He received his training as a monk in the east of the empire from the hermits living in the desert. After the death of the Hun King Attila in 453 he came from Pannonia to Ufernoricum (the Roman province north of the Eastern Alps ), which at that time was already threatened by the collapse of the Western Roman Empire as a result of the migration of peoples . Severin stayed mainly in the Danube region between Carnuntum in the Vienna Basin and the Passau area .

In numerous essays and in his post-doctoral thesis dedicated to Severin from 1976, the historian Friedrich Lotter argued that Saint Severin was identical with an inlustrissimus vir Severinus , whom Ennodius mentions in his biography of the monk Antonius von Lérins as his tutor. The saint is also to be equated with the consul Flavius ​​Severinus appointed by Emperor Majorian in 461 . Between 454 and 461 he worked as provincial governor in the Danube region and even later, when he was already a monk, acted in an official capacity like an official of the empire in the administration of Ufernoricum. These assumptions, some of which are very speculative, have not been widely accepted in research. Severin's very noble descent (a result of Lotter's research) is not in doubt, but the equation of the saint with the consul of 461 is largely, if by no means exclusively, rejected today. Herwig Wolfram described the opposing currents as "Maximal Severin" (Lotter) and as "Minimal Severin".

Severin first appeared in the area of Lower Austria , in Asturis (perhaps Klosterneuburg ), Comagena ( Tulln ), and Favianis ( Mautern ), where the Rugier king Flaccitheus resided on the opposite bank of the Danube, who allegedly asked Severin for advice. His biography is then about Cucullis ( Kuchl near Salzburg) and Iuvavum (Juvao, Salzburg ). Another section describes his work on the Danube near Passau . There it is about the forts and settlements Quintanis (Künzing, above the Vils ), Batavis (Passau to the left of the Inn , both belonged to the neighboring province of Raetia secunda ), Boiotro (Bojotro, Passau to the right of the Inn, a border fort Noricums) and Joviaco (Schlögen / Haibach, a few kilometers downstream in Ufernoricum ). Accordingly, he initially supported and strengthened their Romansh population in view of the constant Germanic raids, but then organized their evacuation to Lauriacum ( Lorch ) on the Enns , soon because of persistent threats further back to the Lower Austrian neighborhood of his former place of activity Favianis, under pressure from the Rugier king Feletheus . Severin apparently spent his old age here.

Severin did not hold any office himself, but seems to have continued to live as an anarchist even after the convent was founded . He was active as a warning, helper and pastor, campaigned for the maintenance of public order and organized food and clothing deliveries. In the years 469/470 he obtained the release of Roman prisoners of war from the Alemannic King Gibuld , whom he met in the Passau area . His decisive demeanor in dealing with rulers testifies to his extraordinary personal authority.

Historical representation of the departure of the Roman provincials with the corpse of St. Severin, from Moritz Smets: History of the Austro-Hungarian Monarchy. 1878

Severin died in Favianis in 482. Eugippius names January 8th as the date of death. He is said to have predicted the day of his own death as well as the depopulation of Ufernoricum due to the withdrawal of the inhabitants. The convent he founded then joined a procession across the Alps, which Hunulf carried out in 488 on behalf of his brother Odoacer , and moved to Italy with Severin's bones. For this purpose, Severin's bones were recovered. Eugippius writes that six years after its first burial the body was not decayed and perfectly preserved and that it smelled, although it was not embalmed.

The new location of the community became Castellum Lucullanum near Naples . At that time the convent was probably led by Lucillus, who was later followed by Marcianus. Severin's bones seem to have been stored in Naples until after the founding of the convent. According to Eugippius, you first had to find a place for the burial. The soil and the tomb were finally donated by a noble lady ( illustris femina ) named Barbaria. The hypothesis that Barbaria was the widow of Orestes and the mother of Romulus Augustulus is speculative. The translation from Naples to Lucullanum found as Eugippius reported with the permission of Pope Gelasius I. instead. The burial was performed by Bishop Viktor I of Naples (approx. 492–496).
The relics of St. Severinus have been kept in the church of the important Benedictine monastery of Santi Severino e Sossio in Naples since 902 , from where they were transferred to the parish church of Frattamaggiore in Campania in 1807 , where they are still today (as of 2018).

The saint is depicted preaching or praying at a tomb. Attributes are a book and / or abbot's staff , a crucifix in the right hand .