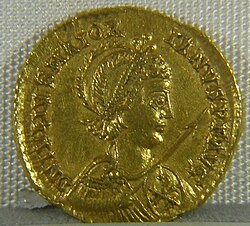 The Roman Majorian, who came from the Latin Illyricum or Italy, had served in the Western Roman army under the magister militum (army master) Aëtius , with whom he had won a victory over the Sal Franconian rex Chlodio in Gaul around 447 . After Aëtius' violent death in 454, the beleaguered Emperor Valentinian III called him . to Rome and made him the new comes domesticorum (guard commander), but the emperor himself soon fell victim to an assassination attempt. During the ensuing turmoil, the emperor's widow Licinia Eudoxia is said to have campaigned, according to the historian Priskos , to raise the loyal Majorian to Augustus , but initially to no avail. Under the brief emperor Petronius Maximus , a civilian from the old senate nobility, Majorian may also have been appointed magister militum , but this is rather unlikely, since he must be considered a rival and enemy of Maximus. His successor Avitus promoted a certain Remistus to magister militum , so that Majorian was probably still comes domesticorum .

In any case, the military leaders of Italy seem not to have been satisfied with the Gallic senator Avitus. Majorian therefore soon rebelled with the help of the second army master Ricimer , who had become the dominant figure in Italy since the death of Maximus. After the fall of Avitus in October 456, Majorian was appointed army master on February 28, 457, this time by the Emperor of the East, and then on April 1, 457, probably under unclear circumstances, he was proclaimed Emperor of the Western Empire by the army. The Eastern Roman Emperor Leo I recognized Majorian at best as Caesar and only after lengthy negotiations on December 28 of the same year as Augustus . Only then, on January 11, 458, did the new West Emperor pass his first law (Nov. Maior. 1). This was addressed to the Senate and demonstrated great respect for the Italian senators, who were probably also dissatisfied with Avitus, but at the same time made it clear that Ricimer was effectively an equal commander of the Western Roman army alongside Majorian.

Majorian, who held the consulate with Leo in 458 , initially held a strong position due to his military background and was by no means, as was sometimes assumed, just a puppet of Ricimer. As one of the last emperors of West Rome, he was still working hard to stabilize the imperial rule in the west - only Anthemius was to show himself as energetic (and also fail). An important source for his reign are the letters and poems of Senator Sidonius Apollinaris , who among other things gave an eulogy for the new emperor, with whom one apparently had high hopes. A renovation and expansion of the Rostra , the large speaker's platform in the Roman Forum , probably fell during the initial phase of his rule and had a maritime victory over the Vandals as an occasion, which, however, was still won under Avitus.

The Senate aristocracy of Gaul, which Avitus had supported, apparently did not initially recognize Majorian as emperor, but regarded Leo as the only Augustus . Perhaps a Gallic senator named Marcellus was trying to instigate a conspiracy against Majorian. But this resistance quickly collapsed when Majorian marched into Gaul in December 458 at the head of an army, which consisted largely of foederati . The emperor came to an understanding with Marcellinus , the comes rei militaris of Dalmatia , who had been in opposition to the western Roman imperial court since the death of Aëtius. With the help of the Hunnic auxiliaries of Marcellinus, the Vandals were kept away from Sicily.

Meanwhile, Majorian managed to keep the Visigoths and Burgundies in Gaul in check with the help of his old acquaintance and now master of Gaul, Aegidius (whom Majorian had installed in place of Agrippinus, who had been deposed in 456/57 ) . The Visigoth rex Theodoric II was defeated by Majorian near Arles in a battle and then had to make peace. In fact, the rule of the Western Roman central government in this area has now been successfully stabilized for the last time. Finally Majorian, who apparently also pursued a policy of reform in the areas of taxation and the military, advanced as the last emperor to Hispania at the head of his army . He also intended to recapture the vital province of Africa , occupied by the Vandals , the power base of General Geiseric . However, this venture failed in 460 after a fleet of 300 ships had already been wiped out by the vandals at Cartagena (perhaps through treason). After this defeat, the emperor retired to Gaul, where he resided in Arles for some time . It was not until the end of July 461 that he set out for Rome again. Before entering Italy, he dismissed his army, apparently expecting no trouble, but at the beginning of August he was deposed by the powerful Ricimer in a coup. The exact reasons for this are unclear. In any case, after the coup, Majorian was sentenced to death by a military tribunal and only five days later was cruelly executed in Dertona in Liguria (north-west Italy). After his death, Aegidius rebelled against Ricimer and founded his own Gallo-Roman sphere of influence in northern Gaul, which existed until 486 and was based on the remains of the Roman army on the Rhine.

Majorian's death ended the penultimate, promising attempt by the western emperors to take the initiative against the military leaders of Roman and “barbaric” origin who had become overpowering and to take power again themselves. A positive assessment of the ruler can already be found in late antique authors such as Prokopios of Caesarea , who, however, contrary to the facts , let the emperor die of an epidemic .