A Klapotetz ( Slovenian klopotec ) is a scarecrow widespread in the southern Styrian wine country . It consists of a windmill with a shaft and mallets which, with their rhythmic clatter, are supposed to keep the birds away from the vineyards when the grapes are ripe. The name comes from the Slovenian : klopótec , in German " Klapper ". In the Slovenian and Austrian dictionary it is called the Klapotetz, in southern Styrian parlance it is called the Klapotetz, probably derived from "the windmill".

In Austria the wind turbine usually has eight blades, in Slovenia six blades. Four types of wood are required to make a Klapotetz: spruce wood (including fir or larch) for the grand piano, beech wood for the clapper, ash or chestnut wood for the block and cherry wood for the pickguard. The latter must be used, because only with it shrill tones are generated , probably frequencies in the ultrasonic range that are unpleasant for the birds . The diameter of the wind turbine is usually around one meter. At the rear of Klapotetz are often birch bushes mounted as a wind vane and counterweight. The clatter of the Klapotetz is characteristic of southern Styrian and Slovenian vineyards .

The folding nets are not in the vineyard all year round. According to old tradition , they are set up at Jakobi , i.e. on July 25th, and dismantled again at All Saints' Day (November 1st) or at Martini (November 11th). 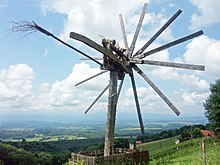 ... and its mechanics
(explanation in the enlargement)

The Klapotetz was mentioned in a manuscript as early as 1797. From 1832 there is a depiction of a Klapotetz next to a castle near Celje . Archduke Johann owned a folding net on his winery in Pickern in 1836.

Since the end of July 1993, a 16 m high twelve-wing folding net with a weight of about six tons has stood on the Demmerkogel . It fell over during a storm at the end of October 2017 and was rebuilt with larger dimensions by July 2018: It now weighs seven tons, is 17 m high and has a wingspan of 14.1 instead of the previous 13 meters. It is fully functional. The cost was around 20,000 euros.

The largest folding net in the world has been in Schloßberg in Styria since 2010 . It is 19 meters high and weighs 25 tons. Its concrete foundation is 9 meters deep.

Occasionally an imitation of the Klapotetz is also built as an organ register, as in 2002 for the organ in the parish church of Gleisdorf .

A modern folding net is on the Kollersimmerlkogel ( Eichberg-Trautenburg ). It is 7 m high and consists of steel pipes, the inauguration was on September 7, 1997.