This article deals with the Swiss community. For the length measure, see mile , for further meanings see mile (explanation of terms ) .

Miles is a political municipality in Switzerland and the capital of the district of the same name in the canton of Zurich .

The community is located on the middle right bank of Lake Zurich between Rapperswil-Jona and Zurich on the so-called Gold Coast . Miles includes the districts of Feldmeilen, Obermeilen and Dorfmeilen on the lake shore as well as mountain miles up the slope. The area is 1193 ha, of which 47% agriculture, 24% forest, 27% settlements. The neighboring communities of Meilen are Herrliberg, Uetikon am See and Egg. Egg is miles separated by the pan handle. On the other side of the lake are Horgen and Wädenswil.

Miles and Obermeilen are separated by the Beugenbachtobel. A 60-meter-long and almost 1.5-meter-wide suspension bridge has been crossing the ravine since June 2012. It was designed by the Chur engineer Hans Pfaffen. The relatively inexpensive bridge at 390,000 francs is the first of its kind in the canton of Zurich.

Meilen-Rorenhaab is a prehistoric settlement on Lake Zurich in the municipality of Meilen. The place name is mentioned for the first time around 880 as Meilana in a property register of the Zurich Grossmünster. The Friedberg has been preserved as a ruin. Between 1990 and 2000, various artefacts such as shoe tips or other everyday objects were found during excavations around the ruins. Most of the finds come from the sod well, which was probably used as a garbage dump after the castle was abandoned. The objects as well as the reconstructions and pictures from that time can be seen in the local museum in Meilen. 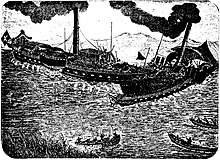 On August 29, 1872, the community of Meilen ordered a special trip for all school children on the steamboat Concordia of the steamboat company for Lake Zurich to Obersee. Depending on the source, the ship was manned by 450 to 500 children. As a result of a misunderstanding, when the parents returned home, a collision occurred between the Concordia at the Schifflände Obermeilen , which drills its bow into the forecastle of the St. Gotthard , which is in service as planned . With one exception (Mrs. Gysi from Basel), the Gotthard passengers were rescued from the sinking Concordia, which reached the Obermeilen jetty at the last moment with all the children in the village and the Gotthard passengers . The staff reports from the Concordia cashier , Brändli from Männedorf , who had contributed a lot to the rescue, but in the end was torn into the depths in the whirlpool of the sinking Gotthard . Since then, an ecumenical memorial service, the so-called Ländeli service, has been held every year at the former Obermeilen shipping area, which is now the Dollikon lido.

A two-towered, tinned black castle in gold over a green Dreiberg , pierced by a gate and windows, raised by two red stars.

In the course of history the number of stars in the coat of arms varied and sometimes the three mountain or the castle "stood" directly on it. It goes back to the Knight family of Friedberg, which in the Middle Ages on the Friedberg lived above miles.

There are three churches in Meilen:

The right bank Zurichseebahn runs through miles . The mile station is from the S-Bahn Zurich served by three lines:

Another train station in the municipality is Herrliberg- Feldmeilen . Miles is on the well-developed bus network of transport companies Zurich and Oberland connected. There are regular connections with the Zürichsee-Schiffahrtsgesellschaft and the Zürichsee-Ferry Horgen – Meilen .

Political communities in the district of Meilen