from Wikipedia, the free encyclopedia
i16

At the same time, the station is a transfer point to the city ​​tram and the meter-gauge Forchbahn , both of which run on Stadelhoferplatz . The station also has a shopping arcade, which is open 365 days a year.

In 1894, the right bank of the Zürichsee -Bahn opened its line from Rapperswil via Meilen to Tiefenbrunnen and through the Riesbach tunnel to Stadelhofen . The route led through the Lettentunnel to Letten train station and from there in a wide arc over the Limmat to the main train station . Since the introduction of the Zurich S-Bahn in 1990, the Lettentunnel has been shut down and trains go directly from the main station through the double-lane Hirschengraben tunnel to Stadelhofen. Two railway lines unravel in the three-track station. It goes single-lane through the old Riesbach tunnel to Tiefenbrunnen and on to Rapperswil. The double-lane route through the Zürichberg tunnel to Stettbach and further in the direction of Winterthur and Uster is new .

Architecture of the new building 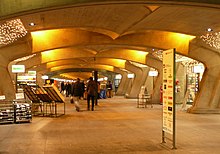 When the station was rebuilt, the late Classicist reception building built in 1894 was retained . It was integrated by the architects Arnold and Vrendli Amsler, Werner Rüeger and Santiago Calatrava (ARGE ACR) into the concrete and steel platform roof, which was modeled on the ribs of a bull. Particularly noticeable is the solution with artistic folding doors that was chosen for the nightly closing of the exits to the underground shop area and the platforms on the mountain side . An equally organic, sculptural staircase and bridge system leads as a pedestrian passage next to the entrance building from Bellevueplatz over the tracks uphill to a passerelle that runs parallel above the tracks and offers passers-by seating and a view.

The Zurich Stadelhofen station was expanded in view of the introduction of the Zurich S-Bahn and is only served by S-Bahn trains. The policy of the 1970s and 80s was responsible for the bottleneck with only three tracks. After the massive failed underground vote in 1973, the plans for a Stadelhofen station with four tracks and a second Riesbach tunnel were slimmed down in order to save 50 million francs. Therefore today the trains that want to go to Tiefenbrunnen have to cross the lane of the trains going from Stettbach into town. In addition, there is no fully-fledged double-lane route between Stadelhofen and Tiefenbrunnen.

Basically, all lines run daily and all day every half hour (with changing endpoints). During rush hour , additional trains, designated as S 23 , run between Zurich HB and Winterthur in the main load direction (5 trains in the morning towards Zurich HB, 4 trains in the evening towards Winterthur) with Stadelhofen as the only stopover. Some of these run from / to Romanshorn and also only stop at the most important intermediate stations on this route. From June 11, 2019, three additional trains, designated as S 20 , will run in the morning from Stäfa to Zurich Hardbrücke and in the opposite direction in the evening to relieve the S7, but these trains will also stop in Küsnacht ZH, but will not stop in Uetikon.

On Stadelhoferplatz in front of the station building:

Stadelhofen station is one of the biggest bottlenecks in the Zurich S-Bahn system. Nine S-Bahn lines operate on the three tracks, which results in a total of 36 trains per hour with four movements per line and hour. In the rush hour this number increases to around 40 trains per hour due to the intermediate trains.

The Calatrava office, as the originator of Stadelhofen station, was asked by SBB Immobilien in 2016 to do a holistic study for a potential extension of the station with a fourth track.

In 2019, the National Council and the Council of States approved a comprehensive expansion of Stadelhofen station for 900 million francs as part of STEP 2035. The construction of a fourth underground track and three access tunnels will increase the station's capacity by 50%. The new tunnels disentangle the branching to the Zürichberg tunnel and the Riesbach tunnel of the right bank of the Zürichsee line without crossing . The access to the new 4th track branches off from the Hirschengraben tunnel after exiting the Zurich main station and passing under the Weinberg tunnel . An underground branch will be created on the east side of the station. A tunnel branch leads into the double-lane Zürichberg tunnel, a second branch follows as the second Riesbach tunnel parallel to the existing single-lane Riesbach tunnel to Tiefenbrunnen station . The start of construction is Template: future / in 5 yearsplanned for 2026 at the earliest .

After completing the 4th track, the central platform should be widened by about 1.5 meters by slightly pushing tracks 1 and 2 together and pulling out a few more centimeters on the wall next to track 3. This results in around 280 square meters of additional platform area.

If the approval process can be carried out without suspensive objections, construction cannot start until 2026 at the earliest.

Tram lines 8, 11 and 15 of the Zurich Transport Authority (VBZ) also run on Stadelhoferplatz . Immediately south of Stadelhoferplatz is the Opernhaus stop , which is served by tram lines 2 and 4. Also within walking distance is the Bellevue , the city's second largest local transport hub after the main train station.

On the nights when the “ night network ” operates, Stadelhofen (night S-Bahn) and Bellevue (night buses) are Zurich's most important transfer hubs, as the main station is not served by all night bus routes.