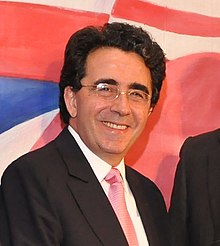 Santiago Calatrava Valls, descending from a Spanish noble family, was born in the Benimàmet district. He graduated from school and high school in his hometown. He then studied architecture from 1969 to 1973, also in Valencia at the Escuela Técnica Superior de Arquitectura with a postgraduate degree in urban studies and then from 1975 to 1979 civil engineering at the ETH Zurich . In 1981 Calatrava received his doctorate with Herbert Kramel at the ETH Zurich on the subject of "On the foldability of half-timbered structures" . In 1992 he received the gold medal from the Institution of Structural Engineers .

In 1980 he opened his Santiago Calatrava AG office in Zurich . A second office was opened in Paris in 1989 . Another one followed in Valencia, which was closed in 2012. In 2012 he relocated the headquarters of his asset management company Calatrava & Family Investments to Switzerland and founded Calatrava Immobilien AG . In 2009 he founded En Archi AG in Zurich .

Calatrava lives and works in Zurich and New York .

Thanks to his engineering knowledge, Calatrava specialized in the construction of bridges . The Puente del Alamillo in Seville , a cable-stayed bridge that the architect designed for Expo 92 , has become famous . Calatrava is also known for the renovation and construction of what are often futuristic stations: Zürich Stadelhofen station (1990), one of his most important early works, Liège-Guillemins station (2009), Lyon-Saint-Exupéry TGV station (1994), PATH (2016). A new Calatrava building at Zurich's Stadelhofen train station, in the form of a triangle, should be ready in 2022.

By combining his engineering knowledge with a functional, organic- futuristic design approach , Calatrava repeatedly projects technically spectacular buildings. Most of his buildings stand out due to the sculptural effect of their supporting structure. Often parallels are drawn to natural structures ( foliage , skeletons or wings ). The elegant design language makes his work immediately recognizable, but it is criticized by critics because the task and function of the respective building cannot be read. However, his buildings are generally popular with the general public. Calatrava often draws the first preliminary drafts of his buildings in the stylized form of animals as rough sketches and gradually simplifies them until a rough draft of the building can be recognized. These sketches are usually also published.

Calatrava designed the interchange station ( World Trade Center (PATH station) ) at Ground Zero in New York with a characteristic hall called "Oculus", which was opened in March 2016 - subject to professional and media criticism, as the costs went from two to almost four Billions of dollars had risen and construction had been delayed for years. This affected Calatrava's reputation in the United States, where he has not received any assignments since.

Also at Ground Zero, Calatrava won the competition for the successor to the destroyed Greek Orthodox St. Nicholas Church . On October 14, 2014, the foundations of the St. Nicholas National Shrine were dedicated at the 9/11 Memorial ; On the occasion, Calatrava explained that for the church he was going back to the model of Hagia Sophia : Like the Parthenon for the classical architecture of antiquity , this forms the paradigm of orthodox architecture; For him, Hagia Sophia is the “Parthenon of Orthodoxy”. The neo-Byzantine domed church quotes the 40 windows of the dome of Hagia Sophia through 40 dome ribs; The mosaics of Hagia Sophia also served as inspiration for Calatrava. Other models for the building, the Chora church and the rotunda in Thessaloniki , also come from Byzantine architecture . Calatrava's watercolor sketches of St. Nicolas were exhibited in the Benaki Museum in Athens in 2015 . St. Nicholas is the only non-secular structure on the site of the 9/11 Memorial in Liberty Park. The external facade made of white marble is illuminated from the inside.

Calatrava designed a tower in Dubai that towers over the Burj Khalifa and is therefore the tallest structure in the world. The Tower (Dubai) , also called Dubai Creek Tower , which is under construction and resembling a rocket in shape, should be completed by 2024 at the latest, i.e., unlike planned, after Expo 2020 , which has been postponed due to the Covid-19 pandemic be.

In February 2014, Calatrava was sentenced to 2.96 million euros in damages by the regional court there for “poor work” at the Congress Palace in Oviedo .

Calatrava met his future wife Robertina during their studies, the couple are parents of three sons and one daughter. The son Gabriel Calatrava is also an architect.

Sorting in ascending order by year of completion, then start of construction:

"No matter what role mathematics and engineering play in Calatrava's work, it is art and emotion that allow him to create works that go far beyond the sober calculation of forces."

"Gravity is to an engineer what colors are to a painter."