The Cross of Calatrava

Combat of a mounted Calatrava knight

Castillo de Alcañiz , castle of the Calatrava order in Alcañiz 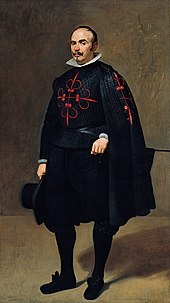 The Order of Calatrava was the first of the great Spanish military orders in 1158 by Cistercian abbot Raimundo Serrat founded originally with the task, the castle Calatrava from the Moors to protect. He originally belonged to the family of the Cistercian orders .

The castle Calatrava la Vieja in the province of Ciudad Real on the Río Guadiana in New Castile was conquered by King Alfonso VII of the Moors in 1147 and placed under the Knights Templar for protection , as it was the strategic access of the Moors to what was then central Toledo .

Not least because of a new Arab offensive and the retreat of the Templars, Calatrava was already given lost when King Sancho III. transferred the city and fortress to the Cistercian order, represented by Raimundo, abbot of the Fitero monastery and his monks.

Divided up by Abbot Don Raimundo and his captain Diego Velázquez and supported by a multitude of people, clergy and lay people, who pledged allegiance to the Cistercian order, the abbot organized an army of more than twenty thousand men of different ages and origins. When the Moors saw the great number, they withdrew and Calatrava was saved.

The real patron of the Order of Calatrava was Brother Diego Velázquez. After his death there was a division: the knights refused to accept an abbot as authority and to live a contemplative life among the monks and chose a master of the order . The monks then withdrew and the knights converted the order into a militia whose members continued to take the three vows of the order.

The first Grand Master of the order to succeed the Cistercians was Don García de Redon , who wrote the first rule of the order and shaped the life of the order. He had the order and its rules through Pope Alexander III. to confirm. His successors, including such illustrious names as Luís de Guzmán and Pedro Núñez de Guzmán , turned him into a real army. Nevertheless, the order was assigned to the clergy and had privileges and rich income from cattle herds, feudal rights, from the alcabalas transferred to them by the king , a kind of value added tax, rent and tax exemption. In its heyday it ruled over 50 commanderies, which brought in 23 million maravedís annually. The Order's jurisdiction included more than 350 villages. Like all Spanish knightly orders, the order felt more committed to the Castilian king than to the Pope. From 1188 5 knights of the Calatrava order were stationed at court.

The Moorish military leader Yaʿqūb al-Mansūr united a powerful army which, in addition to the Almohads, also included the troops of the kingdoms of León and Navarre , which had allied themselves against Alfonso VIII . He was victorious in the battle of Alarcos in 1195 and took Calatrava again in 1196, executing the surviving defenders. This pushed the line between Christian and Muslim Spain back on the old Guadiana line. Master Ruy Díaz attacked with the rest of the order, which had managed to escape in time, the fortress of Salvatierra , which he converted into a house of the order. That is why the order was sometimes called the Order of Salvatierra . During this important phase of the struggle, the Order built its new seat near the Salvatierra Castle, which was finally moved here in 1218. As a result, the old Calatrava was now called Calatrava la Vieja .

In the years that followed, the order took part in countless battles, including in particular the battle of Las Navas de Tolosa in 1212. After this decisive battle, he also recaptured Calatrava. It was from here that the initiative to build countless castles and villages started in the golden years of the order, when it took part in the Reconquista.

The Catholic Kings secured the administration through a bull from Pope Innocent VIII of the crown, so that the order of knights and thus the high nobility would no longer have considerable military and financial power as a state within the state alongside the crown. With the transfer of the grand master's title by Pope Hadrian VI. on the crown the political independence of the order was ended.

Instead of the initial Cistercian habit, the knights wore a white tunic, a white scapular , a black hood and a pilgrim collar. Her religious dress consisted of a white cloak with a red lily cross on the left side.

Under the rule of the following monarchs and with the end of the Reconquista on the peninsula, the military and religious spirit gradually disappeared. Over time, the only reason the order existed was to earn income from its great estates and to preserve its relics. In 1808 the property of the order was confiscated by Joseph Bonaparte , later returned in 1814 under King Ferdinand VII , only to be secularized by Mendizábal in 1838 .

The lily cross of the Calatrava Order is used today as a logo by the Swiss watch manufacturer Patek Philippe . In addition, the manufacturer has launched a watch collection called Calatrava . The architect Santiago Calatrava bears the coat of arms on his private letterhead.