The Benaki Museum in the Greek capital Athens is the largest private museum in Greece . It is the only museum in Greece that guides visitors through all eras of Greek culture and history. It houses works of Greek art from prehistoric times to the present day as well as an extensive collection of Asian art. There are also regular exhibitions. 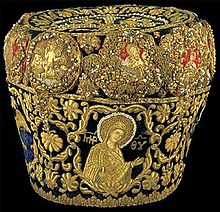 The museum was set up and furnished by Adonis Benakis in memory of his father Emmanouil Benakis. Born on Syros in 1843, Emmanouil Benakis, who came from a wealthy family, was a cotton merchant in Alexandria , Egypt, until he turned to politics in 1910 and was MP, Minister and Mayor of Athens. He was imprisoned because of his political convictions, especially because of his support for Eleftherios Venizelos, and then went into exile. His son Adonis Benakis (1873-1954) was born in Alexandria. He developed a passion for collecting from his youth, and his collection grew in importance as he consulted eminent scholars who helped him assess the significance of the various artifacts. Adonis came to Athens from Alexandria in 1926 and founded the Benaki Museum in 1929, the year Emmanouil Benakis died. He donated the Athens Family Home and his collection of over 37,000 Islamic and Byzantine artifacts. In the 1970s, foundations added over 9,000 exhibits. Adonis Benakis worked for the museum until his death in 1954.

The Benaki Museum is located in Villa Benakis in central Athens, opposite the National Garden, not far from Syntagma Square on Queen Sofia Avenue. The main building of the museum is a classical mansion, as it is characteristic of several prominent buildings in Athens. The building was originally built in 1867/1868 for a Greek merchant, later acquired by a well-known businessman and finally by Emmanouil Benakis in 1910. After his death, it was converted into a museum and opened as such in 1931.

The museum reopened in 2000 after the addition of an extension and the renovation and restoration of the main building, which was damaged by an earthquake. In the meantime, this complex proved to be too small and not expandable, so that important departments were outsourced to branches, including Islamic art, Chinese painting and porcelain. Since then, the parent company has concentrated on the history of the Greek settlement area.

Theodoros Poulakis: Icon, representation of the hymn “All creation rejoices in you”, 17th century

Under the direction of Angelos Delivorias, more than 60,000 objects, books and documents have been added to the museum, some of which have been purchased and others donated. The museum takes into account the fact that Greek history does not begin or end with a key event, but continues as a continuum to this day. Intercultural influences and connections to Greek culture are also explicitly documented.

The original collection of the Benaki Museum is in rooms 1 to 36, the order of the room numbers follows the development of the story. The antiquity collection is located in rooms 1 to 8 of the museum and includes artifacts from prehistoric times, mainly axes and ceramics since the Paleolithic and Neolithic, through exhibits from the Cycladic , Minoan and Mycenaean cultures , the Classical and Hellenistic periods up to the end of the Roman Empire and the transition to the Byzantine Empire .

Room 9 to 12 houses the Byzantine collection, with a focus on the development of artistic representations and the art of everyday household items. This also includes a collection of examples of Coptic art and a number of late Byzantine and post-Byzantine icons by famous icon painters.

The collection was created by Emilios Velimezi's colleague from 1932 until his death in 1946. It bears his name and has been seen several times in German-speaking countries, including the Ikonen-Museum Recklinghausen (1998), the Kunsthistorisches Museum in Vienna (2007) and the Pergamon Museum in Berlin (2007).

Following the course of history, the following rooms 13 to 36 show the artifacts of the modern collection. This collection primarily features depictions of religious and non-religious subjects from the 15th to the 19th centuries when the Ottoman Empire ruled Greece.

The Benaki Museum Greece offers bespoke educational programs for the teaching of art and history for schools in Greece, as well as a series of special events aimed at enriching the general cultural development of the country.

Parts of the museum's collections have already been exhibited worldwide, for example in Canada in 2008 and the United States in 1959 in partnership with the Smithsonian Institution . In 2005 an ancient Greek solid gold drinking cup left Greece for the first time and traveled to the Powerhouse Museum in Sydney and the Melbourne Immigration Museum in Melbourne, Australia.

The museum has a state-of-the-art restoration workshop.

In the Pireos / Andronikou street, a former factory building, an atrium building, was extended and converted for exhibition purposes. In the building mainly special exhibitions of Greek and international modern art are presented on 3,000 m² of exhibition space. An amphitheater in the inner courtyard with 300 seats is used for music performances.

In the course of the concentration of the main building on Greek art, the Islamic collection was redesigned in a separate building; the opening was brought forward for the 2004 Olympic Games in Athens. The museum in a complex of classicist buildings in the Kerameikos district in the historical center of Athens - near the ancient agora - also offers new exhibition rooms for temporary exhibitions.

The museum, inaugurated on July 27, 2004, presents ceramics, pottery, metalwork, gold, wood carvings, glass and textiles, bone carvings, tombs with inscriptions, weapons and armor on more than 1000 square meters. The museum's collections are among the most important in the world and include masterpieces from India, Persia, Mesopotamia, the Middle East, Arabia, Egypt, North Africa, Sicily, Spain and Asia Minor. It shows Islamic art from the 7th to the 19th century and has a rich collection of Ottoman art from the heyday of the Ottoman Empire in the 16th century.

The collection of children's toys is on display in an early 20th century neo-Gothic building with symmetrical towers on Poseidon Street in Paleo Faliro , bequeathed to the Vera Kouloura Museum. It includes 2,000 toys from antiquity to 1970, not only from Greece, but from Europe, America, Africa and the East as well, including handmade traditional Greek toys, board games, dolls from England, France and Germany and doll clothes.

Historical archives in the Delta House

One of the richest historical archives in Greece is housed in a villa built at the beginning of the 20th century in the posh suburb of Kifissia . The house, in which an attack on the former Prime Minister Eleftherios Venizelos failed on July 6, 1933 , was occupied by Pinelopi Delta , daughter of Emmanouil Benakis, until her suicide on the day of the German occupation of Athens in April 1941.

The main focus of the archive material is on documents, reports and other historical material on the history of the Greek nation in the last three centuries: the Greek Revolution , the Kingdom of Greece under Otto I , the 20th century with the government of Eleftherios Venizelos , the resistance against the German occupation. Manuscripts by Greek composers and writers are also archived.

In the house on Kriezotou Street, which the artist Nikos Chatzikyriakos-Ghika lived in for almost 40 years until his death in 1994, works from all of the artist's creative periods are on display, especially paintings, but also watercolors, drawings, designs, sculptures and a photo archive.

In the estate of the artist Giannis Pappas (1913–2005) his work is on display. There are also studios for students from the Athens School of Fine Arts .