The title of this article is ambiguous. Further meanings are listed under Agora (disambiguation) . 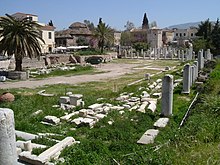 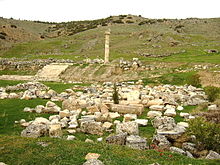 The agora ( ancient Greek ἀγορά agorá , plural agorai ) was the central festival, meeting and marketplace of a city in ancient Greece . It was thus an important social institution and a characteristic feature of the Greek polis . As a central place of worship, it was the venue for many religious festivals with gymnastic and musical agons that were crucial for the development of a common identity . As a place for people's and judicial assemblies, it played an outstanding role in orderly coexistence in the community. In Homer the lack of Agora is considered a sign of legality and lawlessness. According to Herodotus , the agora was the defining characteristic of an independent Greek city for the Persian king Cyrus II ( Histories 1.153).

The agora had its origin in a village meeting place. With the growth of the initially only small communities at the end of the Geometric Period and the ensuing amalgamation of several villages (Synoikismos) into a larger community, the agora of the now developing polis was created in a central and easily accessible location. Originally located outside the various settlement centers that had emerged from the former villages, it moved more and more into the city center as urban structures developed.

Initially, a largely undesigned, flat open space, which was crossed by several streets, was sufficient for the needs of a political and legal meeting place. Due to its central location and easy accessibility, it also became a market square. As an important cultic center of the polis community, altars and later small temples were part of the image of every agora. In the 6th century BC The first public buildings were erected on the edges of the open space with Stoen . These porticoed halls, which can be used for various functions, were built in the course of the 5th and 4th centuries BC. BC to the typical buildings of an agora, with their elongated column positions, Stoen often gave the square a monumental conclusion on one or more sides. Its appearance was now often shaped by such pillared halls. These halls were particularly suited to the role of the agora as a daily meeting point for the inhabitants of a Greek city, as they offered visitors protection from sun, rain and wind.

In the classical period the offices of local magistrates were established at many agorai, a Buleuterion ( town hall ) and a Prytaneion also belonged to the end of the 4th century BC. Often used for the architectural decoration of an agora. It developed more and more into the administrative center of a Greek polis and also served as its representation. The agora became the site of public resolutions and statues of honor.

During the same period, however, parts of their original functions were relocated to other locations. Separate structures such as stadiums and theaters were very often created for Agone . People's assemblies now mostly took place in specially built ecclesiasteries (e.g. the Pnyx in Athens ) or in the theater. Despite all recognizable efforts to shift the market activity to newly created trading markets, the agora never lost its economic functions, but remained the most important trading center of a city even in the Hellenistic period .

In many cities, however, the representative expansion did not take place until the Hellenistic- Roman period, before the agora was sometimes just an open space. The function and shape of the agora partly coincided with those of the Roman forum . The best known example was the Agora of Athens . Other examples were the Agora of Priene and the Agora of Miletus .