The Pfannenstiel is heavily forested, about four kilometers long and two kilometers wide up to the forest borders. The forest is only interrupted around the agricultural farms Vorder and Hinter Guldenen . That is why the Pfannenstiel has become an important local recreation area for the people living in the vicinity and especially in Zurich.

The municipality of Egg is located on the eastern slope of the mountain , on the western slope are several hamlets belonging to Meilen and Herrliberg , the villages on the lake.

In winter, if the snow conditions are good, a cross - country ski run is set up on the Guldenen .

There is an observation tower not far from the highest point . It originally stood on the Zurich Oberland mountain Bachtel , where it had to make way for a new building and was rebuilt seven years later on the Pfanneinstiel. The Gasthaus Hochwacht is located directly below the tower . The Pfannenstiel can be easily reached by public transport ( Forchbahn or bus to Vorderer Pfannenstiel).

Origin of name and spelling

According to the Zurich historian Leonhard von Muralt , the name Pfannenstiel should come from the 17th century and refer to the pitch pan on the Hochwacht . This served as an alarm with fire and smoke signals. However, the name "Phannenstil" can already be found in a document from 1306, when there were no high watches. According to the Schweizerischer Idiotikon , pan style is a common name for "elongated locations, parts of terrain"; So it was inspired by the shape of the terrain, which is long and slightly curved, reminiscent of the wooden handle of an old pan.

The spelling is also fluctuating. Between 1957 and 1983 the spelling “pan style” was used on the national map of Switzerland ; The basis for this was the spelling of the official survey of the canton of Zurich, which in turn was based on the instructions for the collection and spelling of local names in land register surveys in German-speaking Switzerland from 1948 (today: instructions on the collection and spelling of the geographical names of the national survey and the official Surveying in German-speaking Switzerland from 2011). During this time, the authorities of the community of Meilen on the west side of the Pfannenstiel implemented the spelling “Pfannenstil” on their signposts, as well as the street name “Pfannenstielstrasse”. Around 1975 these changes were gradually reversed. According to the 2011 directives, an official nomenclature commission in each canton is responsible for collecting and spelling local names . The ordinance also provides that geographical names with minor, local significance are written in the local dialect (Art. 7: “The spelling of names with minor, local significance, for which no special regulation is provided under Articles 4 and 5, takes place based on the customary local discussion in accordance with the principles and writing rules contained in the appendix to these instructions »). In a dialect spelling is used for a long i , the strain ie the written language is not needed, as ie in Swiss German for the diphthong [ iə ] and not for the Monophthong [ i ː] stands. Accordingly, the pan handle would have to be written without ie . The Pfannenstiel has a greater than just minor local significance, which conversely speaks for the standard German spelling. Art. 5 also states that names that are of general interest due to their geographical, historical or literary significance must be left in the generally accepted spelling.

The Zurich planning group Pfannenstil , however, continues to write its name with a simple i . 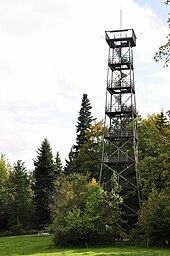 The Pfannenstiel tower, designed as a steel lattice tower, was built on the Bachtel in 1893 and placed under monument protection in 1979. Since it was not sufficient as an antenna carrier, it was dismantled in 1985 by the then PTT and its parts stored. In 1992 it was rebuilt on the pan handle above the Hochwacht restaurant .

The Okenshöhe with the boulder dedicated to Lorenz Oken

South of the Hochwacht restaurant is the Okenshöhe, a natural terrace with a view of the Glarus Alps , which is now restricted by trees . A boulder found nearby was brought here and dedicated to the doctor and naturalist Lorenz Oken .

The pan handle in literature

In 1940 the Zurich writer Albin Zollinger published the novel Pfannenstiel - The Story of a Sculptor . In it, he describes the pan handle between Hochwacht and Forch as "a ridge with a simple course, which could not be expected to have any special surprises". In the novel, a sculptor who has returned to Switzerland is disappointed by the political reality. He retires on the pan handle, builds a house there and finds an intact village community.