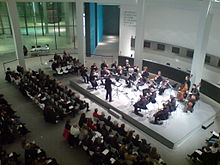 The Munich Chamber Orchestra at a concert in the Pinakothek der Moderne , Munich

The Munich Chamber Orchestra (MKO) is a professional orchestra based in Munich with currently 28 permanent musicians (15 violins , 6 violas , 5 cellos and two double basses ).

The Munich Chamber Orchestra was founded by Christoph Stepp in 1950; Hans Stadlmair directed the orchestra from 1956 to 1995 . From 1995 to 2006 Christoph Poppen was artistic director and shaped the profile of the orchestra significantly by placing the juxtaposition of classical repertoire with contemporary music in the focus of the concert programs. From 2006 to 2016 Alexander Liebreich was chief conductor and artistic director, and Clemens Schuldt has been chief conductor of the ensemble since the 2016/17 season. Concert masters are Daniel Giglberger and Yuki Kasai . The headquarters of the orchestra is the Prinzregententheater in Munich, and the MKO has been looking for a permanent rehearsal room for years.

In November 2012 the Goethe-Institut initiated a musical joint project between the Munich Chamber Orchestra and students from the Kim Won Gyun University of Music in Pyongyang ( North Korea ), which was accompanied by Liebreich.

The eight subscription concerts in Munich's Prinzregententheater follow a thematic guideline each season; in recent years the seasonal themes have been a. "Alps", "Drama", "Childhood", "Isolation", "Eastward", "Reformation", "Hiking" and "Predominantly cheerful"; the motto of the 2019/20 season is “warmth”. The repertoire of the Munich Chamber Orchestra includes classical works as well as contemporary music (some premieres ). The Munich Chamber Orchestra has gained international recognition for this direction in recent years. Fixed components of the subscription series are concerts without a conductor under the direction of one of the two concert masters and collaboration with specialists in early music. The orchestra works regularly with guest conductors such as Thomas Zehetmair , Olari Elts and John Storgårds . There are also numerous long-term collaborations with well-known soloists such as Isabell Faust , Alexander Lonquich , Jean-Guihen Queyras , Christian Tetzlaff and Steven Isserlis

Since the 2003/2004 season, the Munich Chamber Orchestra has initiated a new series of concerts in the Pinakothek der Moderne in Munich, which is dedicated to the work of a contemporary composer under the title "Nachtmusik der Moderne". Over 40 composers have been portrayed in recent years, including modern classics such as Anton Webern , Paul Hindemith , Alfred Schnittke , Karl Amadeus Hartmann and Benjamin Britten , greats of the second half of the 20th century such as Hans Werner Henze , Luciano Berio , Iannis Xenakis , Isang Yun and Witold Lutoslawski and composers of the younger generation such as Jörg Widmann , Erkki-Sven Tüür , Beat Furrer , Brett Dean and James MacMillan .

With its third series, “MKO Songbook”, the Munich Chamber Orchestra has been pursuing three programmatic approaches since the 2015/2016 season in cooperation with “ Schwere Reiter ”: On the one hand, composers from and working here in Munich are to be in the “Werkraum” atmosphere of the Schwere Reiter in to be experienced in new contexts. In addition, the concerts invite you to meet again with exemplary works from the modern string orchestra repertoire. And finally, the MKO would like to present compositions that have been written especially for the orchestra and that in some cases have long since enriched the repertoire of other ensembles as well.

Alexander Liebreich initiated the Munich AIDS benefit concert, which has been taking place since 2007 for the benefit of Munich AIDS Aid. The Munich AIDS concert, at which all artists perform for a good cause without a fee, has been directed by Clemens Schuldt since 2017.

The ensemble gives around 60 concerts a year all over the world. In recent years the Munich Chamber Orchestra has not only performed on many major concert stages in Europe, but also toured in Asia (China, Korea, Japan, Taiwan), Eastern Europe (Poland, Hungary, Russia), Central Asia, Latin America (Argentina, Brazil, Peru , Uruguay, Colombia) and the USA. Some concert tours took place in close cooperation with the Goethe Institute. In January 2018 the ensemble “Orchestra in Residence” was at the Cartagena Music Festival in Colombia.