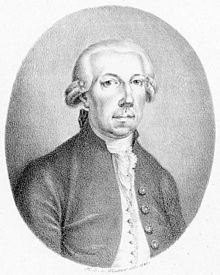 Graf received training from his father Johann Graf and then served as an army drummer in a Dutch regiment, where he was taken prisoner by the English. After his return he was a flautist and conductor in Hamburg from 1759 to 1764 . He went on concert tours through England, Holland, Italy, Switzerland and Germany and became court musician of Count Carl zu Bentheim in Steinfurt . From 1768 to 1772 he was the first flutist in the royal chapel in The Hague , led by his brother Christian Ernst Graf . He then became music director of all Protestant churches and cantor of the St. Anna School in Augsburg, where in 1779 he founded a civil concert society. Here he also got to know Mozart , who did not particularly appreciate his works and described him as a “lean composer of flute concerts”. Around 1785 he was the conductor of the Professional Concerts in London . The University of Oxford appointed him to the doctor of music.

Quartets and quintets for strings and wind instruments, trios and duos for violin and viola, flute concertos and a cello concert have come down to us from Graf; he also wrote sacred music.