Mireille Mathieu [ miʁɛj matjø ] (born July 22, 1946 in Avignon ) is a French singer . In France it is also called La Demoiselle d'Avignon , in Germany it is known as the “Avignon Sparrow”. Mathieu has sold around 190 million records.

Mireille Mathieu was born in 1946 in poor conditions in Avignon . The parents Roger Mathieu (1920–1985), a cemetery stonemason , and Marcelle-Sophie Poirier (1921–2016) had 13 more children; France's former President Charles de Gaulle took over the sponsorship of the youngest in May 1967. She had her first vocal appearance at the age of four in a midnight mass. She left school without a qualification because from 1960 she had to work as an unskilled worker in a canning factory to support the family.

In June 1964 she won the singing competition “On chante dans mon quartier” (“We sing in my neighborhood”) in Avignon with Édith Piafs La vie en rose . Because of this victory, she received an invitation to Paris to audition for the television show Télé-Dimanche . In November 1965 she came back to Paris to rehearse for “Palmarès des Chansons” at the Olympia ; However, she did not take part in the competition, but again preferred Télé-Dimanche . There she started on November 21, 1965 in the singing competition "Le Jeu de la Chance" (" Hazard Game "), sang the piaf song Jézebel on her television debut and won with Georgette Lemaire. This withdrew on November 28, 1965 in favor of Mathieu, so that the way for the stage was clear for Mathieu. At the end of December 1965 she appeared in the Olympic Theater in the opening act of Sacha Distel ("Sacha Show") and Dionne Warwick .

Johnny Stark - who had already promoted Yves Montand , Françoise Hardy , Johnny Hallyday and Sylvie Vartan - was present at the show and was its manager from 1965 to 1989. The music producer Eddie Barclay was also among the audience and offered her a record deal with his Label Barclay Records .

In December 1965 a live LP was made from her performance. In June 1967 the record reached number 14 in the German LP charts. At the same time Mathieu played a few singles for the Barclay label in 1966; the first was Mon Crédo in March 1966, followed by C'est ton nom . Mon crédo developed into a great success, with 1.7 million copies sold and its first number one hit on the French charts . As early as May 1966, 500,000 copies were sold in France alone. 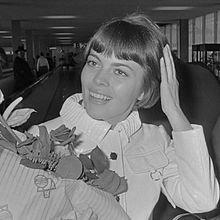 She had another number one hit in November 1966 with Paris en colère from the movie Brennt Paris? . When they released the French version of The Last Waltz ( La dernière valse ; text: Hubert Ithier) in October 1967 , Barclay Records was able to sell over 200,000 copies in France by December 1967. On March 6, 1966, she appeared in the United States on the Ed Sullivan Show in front of 50 million viewers; In the same year she made her first guest appearance in the GDR in the East Berlin Friedrichstadt-Palast . At the beginning of May 1967 she was on tour in (West) Germany for the first time; after that she toured the Soviet Union for 26 days . At that time she was already being celebrated by the media as the “new Piaf”. In May 1967, according to Billboard , 39% of French respondents voted Mireille Mathieu the most popular French singer. The youth magazine Bravo reported on the tour in the same month. Her first record in (West) Germany was the LP Mireille Mathieu I with chansons in July 1967 .

In the James Bond parody Casino Royale , she sang her first German recording, Ein Blick von dir, in the German dubbed version . In May 1968 she went on tour in Germany again. In 1969 she began working with the pop composer team Christian Bruhn (music) / Georg Buschor (text), whose 100 or so hit texts for Mathieu were mostly about love, France and Paris. In order to protect Mathieu from comparisons with Édith Piaf, which she never liked, her long-time manager Stark made sure that she quickly got her own repertoire and hardly interpreted Piaf songs until the 1970s. She had her breakthrough in April 1969 with the piece Behind the Scenes of Paris / Martin (Ariola 14285; 5th place in the German hit parade), recorded in the Berlin Ariola recording studio. When her manager Stark heard the song there, which had not yet been completed, he exclaimed enthusiastically “C'est ça! Adjustment! ”(“ That's it! ”). The filming of Behind the Scenes of Paris took three hours for Mathieu, who was ignorant of the German language. The format for future German-language hits by Mathieu was found. Katja Ebstein made demo recordings , after which Mathieu learned the lyrics phonetically, Bruhn was her music producer until 1980.

Akropolis Adieu from September 1971 was their first million seller . Her greatest commercial success was La Paloma Ade from October 1973 with over a million singles sold, the title reached number 1 in Germany and was in the charts for 27 weeks. Two choirs were recorded overdubbing for this , the beginning of the chorus was interrupted like a prelude . Further single successes followed in Germany, including On a Sunday in Avignon (April 1970), I'm fine, Chéri (October 1970), All of Paris is a Theater (February 1971), The Paris Tango (June 1971) , The Tsar and the Maiden (September 1975) and Santa Maria (May 1978). Mathieu has been a regular on German television since 1969 and got her first own television program on ZDF with the title Rendezvous with Mireille . The DFF the GDR sent on 31 December 1970 as the first color broadcast of the East German television the gala evening with Mireille Mathieu from Leipzig . Other German shows followed, such as 1977 It is time for music and Bonsoir Mireille in April 1982 on ZDF and Meine Welt ist die Musik in March 1998 on the first .

In 2005 she celebrated her 40th stage anniversary with a tour, a CD with new French songs and with many TV shows in France and Germany. Russian President Putin invited them to sing in Moscow's Red Square on May 9, 2005 (on the occasion of the 60th anniversary of Victory Day ). In November 2006 she released her first DVD, a concert recording from the Paris Olympia , recorded during her concert series for the stage anniversary. On May 6, 2007, she sang at the invitation of President Nicolas Sarkozy during the 2007 French presidential election , the French national anthem , in October 2007, first appeared in eight years another - by Jan-Eric Kohrs produced - German-language LP In my heart, with 14 titles in German language. More than 20 years after her last tour of Germany, Mathieu went on tour again in the spring of 2008 with her current songs and her greatest successes of the past. In October 2009 the CD Nah bei Dir was released with 14 new German titles. In the spring of 2010 Mathieu gave 22 concerts in Germany, Austria and Denmark as part of her tour My greatest successes . 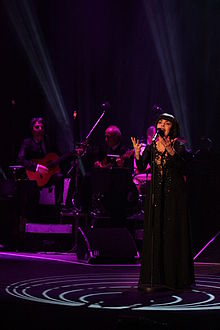 In addition to French, she sings in English, German, Italian, Spanish , Catalan , Occitan , Russian, Finnish, Japanese, Latin and Chinese. In 1972 she was awarded the Bambi , there were further Bambis in 1973 and 1987. In 1984 she received the Federal Cross of Merit for her services to Franco-German friendship , in 1999 she was made a knight and in 2011 she was made an officer of the Legion of Honor in France. She was guests of Queen Elizabeth II , US President Ronald Reagan and Pope John Paul II , among others . Mathieu also lent her face to the French national symbol Marianne .

Characteristic of the 153 centimeter tall Mireille Mathieu are her powerful, slightly tremolous voice and her precise articulation and intonation, which she probably developed consciously because her father encouraged her to audition as a child and at the same time had a weakness in reading and spelling had to compensate and suppress her Provencal accent . Her timbre and her performance while singing are reminiscent of Édith Piaf , who was her role model even as a child. Her pageboy hairstyle has remained unchanged since 1965, and she appears in black dresses - the trademark of her role model Piaf. In 1993 she recorded two albums with Piaf chansons (Mireille Mathieu chante Piaf) . The passionate character of Piaf music also became an artistic trademark for Mathieu, from her first great success Mon crédo in 1966 to the French version of the ABBA hit The Winner Takes It All (Bravo, tu as gagné) in 1981. In addition to Dalida and Piaf counts to the national cultural heritage of France and is with the French-Canadian Celine Dion the most commercially successful French-speaking singer.