The title of this article is ambiguous. See Hugh Grant (disambiguation) for additional meanings . 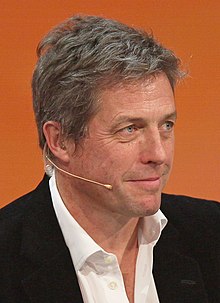 Grant was born in 1960 to an officer and a teacher. He grew up with his brother James in Chiswick in the Hounslow borough in west London. At the age of nine he took piano lessons from Andrew Lloyd Webber's mother. After graduating from school, he received a scholarship to Oxford and studied English ; his career aspiration was an art historian . He gained his first acting experience in the college theater group and decided to take professional acting classes after graduating.

Grant made his cinema debut in 1982 in Privileged, his first TV role in 1985; various other roles in film and television followed without great success. He became known as an actor in England in 1987 with the film Maurice . The film Four Weddings and a Death gave him his international breakthrough in 1994, which in turn made his long-time girlfriend, actress Liz Hurley , famous .

In 1995, Grant hit the headlines of the tabloids . He had invited a prostitute into his car and was caught and arrested with her by police officers having sex in public .

After he had not played a role for three years, he landed a great success in 1999 with the comedy Notting Hill , in which he played alongside Julia Roberts . This was followed by numerous romantic comedies with an optimistic character, typical of Grant , including Bridget Jones - Chocolate for Breakfast in 2001 and Indeed ... Love in 2003. He received the honorary award at the 2006 César Awards , the most important annual French film award.

As a victim in the News International scandal , he appeared as a speaker at party events of the Labor Party and the Liberal Democrats .

Grant is a staunch opponent of Brexit and attacked British Prime Minister Boris Johnson, who supports Brexit, in sharp words.

Grant is an ambitious tennis player.

Starring the Doctor in Doctor Who