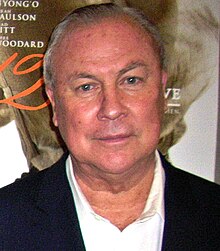 Wilson studied business administration at the University of Texas from 1959 to 1962 . In 1963 he moved to Brooklyn, studied architecture at the Pratt Institute and took lessons with Sibyl Moholy-Nagy , the widow of photographer and light artist László Moholy-Nagy , and he studied painting with George McNeil and worked with choreographers George Balanchine and Merce Cunningham . He continued his architecture studies with Paolo Soleri in Arizona.

Wilson, who with the help of the dancer Byrd Hoffman was able to successfully overcome his stuttering in 1958, was already working with disabled children during his studies. This culminated in 1968 with the founding of the Byrd Hoffman School of Byrds in New York City and the adoption of a deaf boy.

From 1966 Wilson drew attention to himself in New York with his theater performances. In addition to his theater work, Wilson works as a painter, draftsman and designer.

In 1972 Wilson's week-long play Ka mountain and guardenia terrace was performed at the Shiraz Arts Festival in Iran . In 1976 his opera Einstein on the Beach was premiered in Avignon with music by Philip Glass and Lucinda Childs as the lead choreographer and dance soloist. In the same year he had his first solo exhibition at the Paula Cooper Gallery in New York. From the mid-1980s he worked on several projects with Heiner Müller , whom he met in 1977 on his second trip to America. Both had a lasting influence on the work of the other. Robert Wilson is a member of the board of trustees of the International Heiner Müller Society.

In December 2005 he was commissioned to create a permanent exhibition for the Mozart year 2006 in the Salzburg birthplace of Wolfgang Amadeus Mozart . In it he combines original exhibits with his own work.

Andrzej Wirth brought Robert Wilson to the Institute for Applied Theater Studies at the Justus Liebig University in Giessen as a visiting professor .

In 2016 he directed L'incoronazione di Poppea at La Scala in Milan . He is also responsible for the set and lighting design.

In the same year he and Arvo Pärt created a staged production of several works by Pärt, which had a celebrated premiere in Tallinn under the title Adam's Passion .

Also in 2016, Wilson's second radio play Tower of Babel was published with the participation of u. a. by Edith Clever, CocoRosie, Daniel Libeskind, Jonathan Meese, Christopher Nell, Fiona Shaw and Daniel Hope.

Robert Wilson is considered one of the most important representatives of international contemporary theater. Due to his versatility as a director, set designer, architect and designer, he has fundamentally renewed theater and performance art . His work also took him to Germany, which gave theater life new impulses. With a performance of The Black Rider , a musical version of Weber's Freischütz , scored Wilson an international success. He still works on works by Büchner , Brecht , Wagner and Strauss and brings them to the stage not only in Germany but internationally.

"The responsibility of the artist is not to give answers. It is to ask questions. "

as a curator and designer