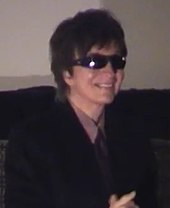 After his great success with films like The Last The Dogs Bite, and especially with Those Going Through Hell , Cimino was considered the new “ child prodigy ” of Hollywood . His late-west Heaven's Gate , however, was panned by contemporary critics and became one of the biggest flops in cinema history. The film was to receive a certain appreciation later - especially in Europe.

Cimino first studied art and architecture at Yale University . He discovered his interest in the theater and learned to direct at the Actors Studio and then shot commercials and documentaries. This was followed by screenplays for several films, including Dirty Harry II .

In 1974 he first directed the road movie The Last Bite the Dogs . He achieved great success with the large-scale epic The Going Through Hell (1978) about soldiers in the Vietnam War and their damaged lives after their return to the USA. The film won five Academy Awards, including one for best director. Cimino believed he could build on this success with his next major project. But the late-western Heaven’s Gate (1980) turned out to be the biggest economic failure in film history to date because of completely excessive production costs, devastating reviews and a disappointing box office result. This eventually led to the Transamerica Corporation selling the producing studio United Artists to MGM . The Director's Cut - at 218 minutes, much shorter than the five-hour original - then received the Honorary Lion of the Venice Film Festival in 2012 .

After Heaven's Gate, Cimino had great difficulties financing further projects in Hollywood; all previously planned film projects with United Artists have been canceled. Five years after his failure, he was able to win the Italian producer Dino De Laurentiis for his thriller In the Year of the Dragon (1985). He wrote the script himself together with Oliver Stone . The film was received very differently; Cimino was able to win back some of the American film critics and cinema-goers, but this film was not a commercial success either. The following films could not build on the success of Die durch die Hölle either . In 2001 he published his first novel, Big Jane . This is about a 19-year-old, two-meter-tall woman who left the New York suburbs in the early 1950s, fell in love with three men, rodeos, went to Hollywood and finally fought in the Korean War .

At the Locarno International Film Festival in 2015 Michael Cimino was awarded the Leopard of Honor for his life's work.