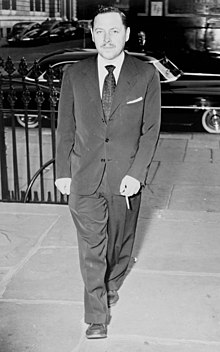 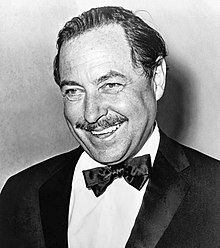 Tennessee Williams , actually Thomas Lanier Williams III , (born March 26, 1911 in Columbus , Mississippi , † February 25, 1983 in New York City , New York ) was an American writer . He was nicknamed "Tennessee" by college friends at the University of Missouri because he spoke the accent common in the state of Tennessee . His grandparents, whom he often and gladly visited, lived there, which was a defining feature of his accent . In 1944, the script for The Glass Menagerie in Chicago , which was initially rejected in Hollywood, led to Williams' first stage success. The play The Tattooed Rose ( dedicated to his partner Frank Merlo ) received the Tony Award for best acting. It also premiered in Chicago in 1950. Critics define the style of his plays as " Southern Gothic " (" Southern Gothic "). In 1948 and 1955 Williams was awarded the Pulitzer Prize for his pieces Endstation Sehnsucht (A Streetcar Named Desire) and The Cat On a Hot Tin Roof .

Tennessee Williams, second child of Cornelius Coffin Williams and Edwina Dakin, grew up in Columbus / Mississippi. Since his father was often absent as a traveling shoe seller and led a rather unsteady life, Williams' family had to move to St. Louis , Missouri , in 1918 , where he spent his youth and lived in cramped, poor conditions. From 1929 to 1932 he studied journalism and theater studies at the University of Missouri-Columbia. After dropping out of his studies, he initially earned his living as a worker in a shoe factory. In New York he attended Erwin Piscator's courses for young dramatists. Before Williams could celebrate his first stage success with The Glass Menagerie in 1944 , the manuscript for this play was rejected during a short, unsuccessful stay in Hollywood.

His difficult family relationships are partly reflected in his literary work. The father Cornelius Williams beat his children. The mother, Edwina Williams, came from a formerly wealthy southern family. His younger brother, Dakin Williams, was favored by his father over Tennessee. His older sister, Rose Williams, was mentally ill and emotionally unstable and as a result spent much of her life under medical supervision. Tennessee Williams never forgave her for having had a lobotomy that her parents had given her consent to undergo.

The characters in Williams' plays are often viewed in the context of his family background. Laura Wingfield is seen in The Glass Menagerie as being inspired by his sister Rose and Amanda Wingfield as being inspired by his mother. Other characters, such as Tom Wingfield in The Glass Menagerie and Sebastian in Suddenly, Last Summer , are also considered to be autobiographically influenced. Brick Pollitt, the main character in Cat on A Hot Tin Roof , also has strong autobiographical traits. Most of all, however, Williams was a writer from the American South . New Orleans , the delta of the Mississippi and the coast of the Gulf of Mexico are scenes of his pieces. In addition to autobiographical references, he used the image of the puritanical southern society as a template for numerous plays.

In his memoir , Williams claims that he became sexually active as a teenager. His biographer Lyle Leverich, however, assumes that he only had sexual experiences in his late twenties. Williams' main gay relationship was with his secretary, Frank Merlo. It began in 1947 and ended in 1961. Merlo's death from cancer in 1963 plunged Williams into a seven-year depression . During the time of their relationship, Merlo Williams gave emotional stability and the works created at the time are considered his best.

In 1952 Williams was elected to the American Academy of Arts and Letters and in 1962 to the American Academy of Arts and Sciences . He spent many years in Rome; he had a deep friendship with the Italian actress Anna Magnani . For her he wrote the plays The Rose Tattoo (The tattooed rose) and Orpheus Descending (Orpheus descends) , in each of which she played the leading role.

In January 1979, Williams was a victim of anti-gay violence in Key West . Five teenagers beat Williams, but he did not suffer any serious injuries. The act was preceded by a newspaper advertisement against homosexuality placed by a local Baptist preacher , which resulted in several assaults.

Tennessee Williams choked to death on a bottle stopper for nasal spray or eye drops in his New York City residence at the Elysee Hotel on February 25, 1983, at the age of 71. Williams was buried in St. Louis .

see also the numerous reading aids for the individual works

Parts of the article - the changes of May 2nd, 2006 are based on the article Tennessee Williams of the English Wikipedia, probably in the version of April 28th, 2006 . Also to be mentioned: