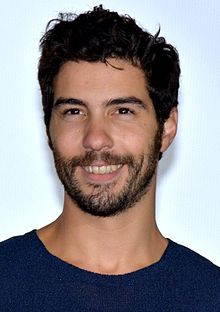 Tahar Rahim (born July 4, 1981 in Belfort ) is a French theater and film actor. He gained fame through his first leading role in the film A Prophet (2009).

Tahar Rahim, of Algerian descent, began studying film at the Université Paul-Valéry in Montpellier . There the director Cyril Mennegun got him his first role in 2005 in the semi-autiobiographical documentary Tahar, l'étudiant . In the work, which was shown at several film festivals, Rahim was presented as the son of a single mother of ten children from Belfort, who has to choose between work and study. After his first experience in front of the camera, he joined the acting workshop of Hélène Zidi-Chéruy and was represented in 2007 with a small supporting role in Julien Maury and Alexandre Bustillo's horror film Inside . He first gained notoriety in France through the recurring role of Yazid Fikry in the television series La commune broadcast on Canal Plus , which takes place in a French suburb marked by unemployment and organized crime. In the series, which came from the pen of the screenwriter Abdel Raouf Dafri, the 26-year-old actor took on the role of an easily influenced 15-year-old school leaver, who, frustrated by the tutelage of his mother and sister, drifts into crime.

Rahim's breakthrough as an actor paved the way for the title role in Jacques Audiard's A Prophet in 2009 , for which Abdel Raouf Dafri wrote the film script. Audiard had met Rahim while driving together from another film set. "I looked at him and that was it, even though I didn't trust my instincts and had 40 other actors audition for the role before choosing him," said Audiard. "When I looked into his eyes, I saw no melancholy, no tragedy, just someone very sincere, [...] full of life," says the director. In the crime drama, Rahim played the lead role alongside Niels Arestrup, a young prison inmate of Arab origin who, with the help of the Corsican mafia, becomes an influential criminal. A Prophet premiered at the 62nd Cannes Film Festival in 2009 , where the film received high praise from critics and was awarded the Grand Jury Prize. The still unknown Tahar Rahim in the role of Malik, which the French daily Le Monde described as “breathtaking” , while the Liberation spoke of a “startling revelation” , was also praised for his acting performance . Rahim was then traded as a favorite for the actor's award, but it was awarded to the Austrian Christoph Waltz ( Inglourious Basterds ). Months later he won the European Film Award for Best Actor and two Césars . It was the first time in the history of the French Film Awards that the awards for best leading actor and best young actor were given to one person. During the shooting of the film he also met his partner Leïla Bekhti, to whom he has been married since 2010.

After the great success of A Prophet , Rahim didn't return to the big screen until 2011. In Kevin Macdonald's historical film The Eagle of the Ninth Legion , he took on the supporting role of the barbaric tribal prince Liathan and made his debut in English-language films. In the same year followed a leading role in Jean-Jacques Annaud's historical film Black Gold on the side of Antonio Banderas and Freida Pinto .

In parallel with his career in film and television, Rahim appeared on the theater stage. In January 2008 he successfully slipped into the humorous role of a blind man who plans to leave his mother in the play Libres sont les papillons, directed by Hélène Zidi-Chéruy .

Rahim at the César Awards 2010