A Russian Summer is the film adaptation of a biographical novel by the American writer Jay Parini about the last year of Leo Tolstoy's life . The film was shot in Germany, among others , under the direction of US director Michael Hoffman and released in 2009. The official German theatrical release was January 28, 2010.

Russia, 1910: In the last year of his life, Leo Tolstoy spends his summer with his wife Sofia and some of their children on their Yasnaya Polyana estate . When Sofia learns that Tolstoy would like to bequeath the rights to his work to the Russian people, a highly emotional conflict begins between the two of them: the spirited Sofia sees herself and the children as the rightful heirs and administrators of Tolstoy's work and tries by all means to get him of his dissuade utopian plan and secure the future of the family. The downright fanatical “Tolstoian” and Adlatus Vladimir Chertkow, in turn, encourages Tolstoy's idealism.

While the old couple argue in love, there is also a young one: the young poet Bulgakov , Tolstoy's new secretary and student, takes a liking to Mascha, an intrepid young admirer of Tolstoy. Bulgakov is exposed to Chertkov's and Sofia's attempts to win him over to their side in the conflict over Tolstoy's work, and daughter Sascha, recently confidante of her father, is also fueling the conflict over the father's estate.

The bitter quarrel between the lovers ultimately drives Tolstoy to flee and thus into an illness from which he does not recover. For him, a train station becomes the “last stop” at which the two love stories connect again.

The template for the film was provided by the 1990 biographical novel Tolstoy last year (original title: The Last Station: A Novel of Tolstoi's Last Year ) by Jay Parini. The writer and journalist Parini drew the basis of his work from letters and diary entries from friends and family members of Tolstoy. Director and screenwriter Hoffman then processed the six different first-person narrator perspectives of the novel into one continuous film perspective. He also made some minor changes to the story, so that by the end of the film, both love stories cross again. 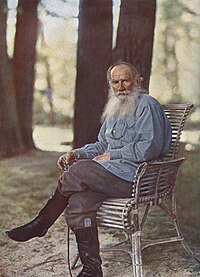 Helen Mirren and Christopher Plummer play the Tolstoy couple. Initially, Meryl Streep and Anthony Hopkins were to be cast , but they could not accept due to scheduling reasons. The Scot James McAvoy and Kerry Condon play the young couple who find themselves in the slipstream of Tolstoy, Paul Giamatti was cast for the role of Tolstoy's henchman Chertkow. British actress Anne-Marie Duff , who plays the daughter of Sascha Tolstoy, and James McAvoy have been married for several years.

The production designer of the film, Patrizia von Brandenstein , was awarded an Oscar in 1985 for her work on the Mozart film Amadeus .

The shooting for the film took place from April 2008 for several months, primarily in the federal states of Brandenburg , Saxony-Anhalt , Thuringia and Saxony . For example, the film was shot in and around Pretzsch (Saxony-Anhalt), whose train station also served as the end of Tolstoy's journey. The fact that Germany was chosen for the locations was a condition of the financial support from the German donors. According to information provided by members of the crew, the chosen locations were similar to the Russia in which the story takes place. Stülpe Castle in Brandenburg served as the filming location for Yasnaya Poljana , the residence of the Tolstois . The Rieseneck hunting grounds near Kleineutersdorf in the Saale valley south of Jena served as the backdrop for Telyatinki, the home of the Tolstoyans.

The budget of the film was around 13 million euros. Funders for the project were u. a. several German film funding agencies: the Mitteldeutsche Medienförderung , the Medienboard Berlin-Brandenburg , the Filmförderungsanstalt (FFA), the production was also supported by the state of Saxony-Anhalt.

The film is distributed in Europe by Warner Bros. and in the USA by SonyClassics. Its premiere took place in 2009 at the Telluride Film Festival . After several other performances at festivals, it was brought to US cinemas in limited numbers in December 2009 to a. to be eligible for the 2010 Academy Awards. The regular premiere then took place, as in Germany, in January 2010.

“The film biography portrays Tolstoy not only as a writer, but also as a leading figure in the leading roles, excellently played, carefully furnished and photographed. With its criticism of the star cult and media hype, the film also builds a bridge to the present. "

“Free of overdrawing, the characters derive their humor from the touching doggedness with which they carry out their dramatic conflict. This also applies to Paul Giamatti (Chertkov), who is typified as a nasty intriguer, or to the virginally naive acting James McAvoy (Bulgakov). Both characters develop a humorous effect in their stereotypes due to their persistence. So the film could function as a comedy on its own, if it weren't for the other goals that the film drifts past quite indecisively. "

“Rather, the humiliated wife serves all facets of raging passion. As tenderly as Sofia strokes her sleeping husband's cheek on the one hand, she attacks him furiously the next moment, only to go into the water in complete dissolution with blowing hair. But all the turtling and raving runs off Tolstoy - one night he just sneaks away and never comes back. Christopher Plummer plays him as a man who knows that he is not really doing the right thing, but who succumbs to his vanity. "

At the young international film festival in Rome , Helen Mirren received the award for best actress for her performance in October 2009. The jury was headed by Miloš Forman in 2009.

Helen Mirren and Christopher Plummer were nominated for their performance at both the Golden Globe Awards and the Screen Actors Guild Awards of 2010 for Best Actress and Best Supporting Actor, respectively. At both awards, the awards were ultimately given to Sandra Bullock and Christoph Waltz, respectively. In addition, Helen Mirren was nominated for an Oscar in the category Best Actress in 2010 and Christopher Plummer for Best Supporting Actor.

The German Film and Media Assessment FBW in Wiesbaden awarded the film the rating particularly valuable.