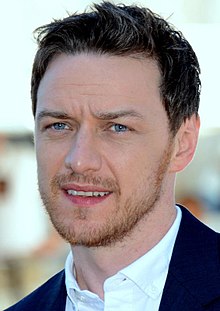 McAvoy was born in the Scotstoun neighborhood of Glasgow . His parents separated when he was seven, and he was raised with his grandparents, James and Mary Johnstone. His sister Joy, however, stayed with his mother, and contact with his father was completely lost in the years that followed. McAvoy attended St. Thomas Aquinas School in Scotstoun and made the decision early on to become an actor. In 2000 he graduated from the prestigious Royal Scottish Academy of Music and Drama and then worked for a while as a baker .

At the theater, McAvoy gained experience in plays such as Romeo and Juliet , Beauty and the Beast and West Side Story . This was followed by appearances in British television series and films and in 2001 in the international production Band of Brothers . In 2003, he played Prince Leto Atreides in the science fiction miniseries Children of Dune - and the film son of Alec Newman , after both portrayed their peers in the British comedy drama Bright Young Things from the same year. The role of Steve in the British hit series Shameless (2004) further increased McAvoy's popularity. In 2005, he played Mr. Tumnus in the literary film adaptation The Chronicles of Narnia: The King of Narnia , the first part of the Narnia Chronicles film series .

In 2006 he starred alongside Forest Whitaker in the film drama The Last King of Scotland about the Ugandan dictator Idi Amin as his personal physician, which earned him, among other things, a nomination for the 2007 European Film Prize. He played his most successful role in the 2007 film adaptation of the novel Atonement by Ian McEwan alongside Keira Knightley and directed by Joe Wright . The role of Robbie Turner earned him nominations for the 2008 Golden Globe Award and the 2008 European Film Award . In the same year he starred in the biography of Jane Austen , Beloved Jane , alongside Anne Hathaway . In 2008 he was in the action-thriller Wanted alongside Angelina Jolie and Morgan Freeman to see. In 2009 he played alongside Christopher Plummer , Helen Mirren and Paul Giamatti the young secretary of the writer Leo Tolstoy in the German-Russian cinema production A Russian Summer .

McAvoy was then able to land a coup in the role of a younger version of Charles Xavier, otherwise embodied by veteran actor Patrick Stewart , in the X-Men film series. To date, he has played the character in four films in the series, most recently in 2019 in the fourth part of the second X-Men trilogy: X-Men: Dark Phoenix . On the one hand, McAvoy continued his choice of more action-packed materials, which he had seen since Wanted , just as he mostly portrayed more ambivalent characters , for example in his roles in trance - dangerous memory or bastard . In 2015, he took on the role of the eponymous protagonist in Victor Frankenstein - Genie und Wahnsinn . On the other hand, he turned to the dubbing of animated films, he also continued his theater work in London.

On October 27, 2015 it was announced that McAvoy would star in a film by M. Night Shyamalan entitled Split . The film premiered in September 2016 and was released in theaters in January 2017. On November 2, his involvement in the Wim Wenders planned adaptation of JM Ledgards' novel Submergence from 2012 was also confirmed. The action revolves around a couple in love who are exposed to the most extreme situations thousands of miles apart. Filming began in March 2016 in Europe and Africa.

McAvoy lives in London . He has been married to actress Anne-Marie Duff since October 2006 and has been the father of a boy since early summer 2010. In May 2016, the couple announced they were getting a divorce.

McAvoy has been mainly spoken by Johannes Raspe in the German dubbed versions since Penelope . 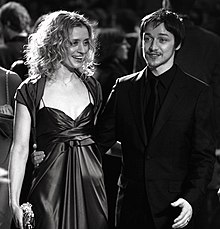