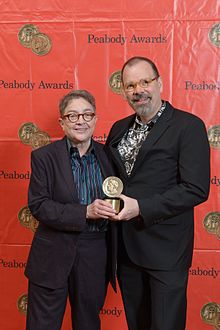 David France (born 1959 in the United States ) is an American investigative journalist, non-fiction author and filmmaker.

Openly acknowledging its homosexuality , France moved from Kalamazoo , Michigan to Manhattan in the East Village in 1981 to live more freely than he could in his hometown in the early 1980s. He started working as a journalist in the gay scene. France mainly wrote investigative articles on LBGT topics. In the 1980s, HIV spread rapidly through the New York gay community, and France began researching and writing articles on the subject. Especially since his long-time partner Doug Gold died of the disease in 1991, the topic preoccupied him more and more. He himself remained HIV negative.

After the first retroviruses became known in the 1990s, he broke away from the topic and began working as a journalist for the major New York magazines. He wrote as an editor for New York Magazine and Newsweek, among others . Journalistic work has appeared in the New Yorker , New York Times , Rolling Stone and GQ , among others . In 1992 his first non-fiction book Bag of Toys was published . The book deals with the so-called "Death Mask Murder", a case that in an S & M - Dungeon of gallery owner Andrew Crispo has taken place and in which a fashion student was murdered. The case was never resolved. Our Fathers: The Secret Life of the Catholic Church in an Age of Scandal followed in 2005 , which deals with allegations of abuse in the Catholic Church of the United States and focuses on the veiled by the Vatican . In 2006 he published the book The Confession with Jim McGreevey . In this book, the former New Jersey governor describes the struggles with and over his sexual identity . The politician, who came from a strictly Catholic family, came out in his resignation speech in 2004.

In 2009 he began to make the documentary How to Survive a Plague , which is about the early days of the HIV virus and the lobbying work of the Act Up organization . The film was released in 2012 and a huge hit with critics. It won a Best Documentary Film award at the Gotham Independent Film Awards and was also recognized by the Boston Society of Film Critics . The film was also nominated for the Independent Spirit Awards 2012 and the Academy Awards 2013 . The book of the same name was published in 2016 and won the Lambda Literary Award in the LGBT Nonfiction category and the Baillie Gifford Prize for Non-Fiction in 2017 .