Vacuum fluctuations , quantum - and zero turnover , are terms that in the context of quantum field theory are used. In popular science articles, the term is often reduced to the quantum mechanical energy-time uncertainty relation or to virtual particles .

In physics, fluctuation is understood as the random change in an otherwise known constant or oscillating system variable, such as fluctuation in the earth's gravitational field . However, the vacuum fluctuation is not to be understood in this sense . The vacuum is uniform in space and time and does not change at all. 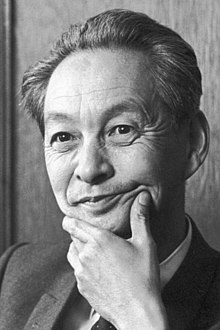 In the formulas of the quantum field theory of Werner Heisenberg and Wolfgang Pauli , infinities appear, which were resolved by renormalization by Richard Feynman and Julian Seymour Schwinger in 1948 and a little earlier during the war by Shin'ichirō Tomonaga . In connection with the resulting terms, the physicists developed the idea of ​​clouds of virtual particles that surround the non-disturbed particles of classical theory . In the imagination, virtual particles can be reabsorbed real and immediately in a very short period of time. The resulting fluctuation in energy changes the measurable mass and charge of the particles. This fluctuation is therefore already contained in the observable particles such as electrons or photons and can never be viewed in isolation. The virtual particles therefore have no physical meaning, so the vacuum fluctuation must not be confused with the pair formation .

As early as 1970, physicist Gerald T. Moore derived from quantum field theory that virtual particles that are in a vacuum can become real when they are reflected by a mirror that moves almost at the speed of light . However, this effect is more due to thermal emission. It was later also called the dynamic Casimir effect. The experimental physicist Per Delsing and colleagues from the University of Gothenburg believe that they demonstrated this effect in 2011.

According to their own statement, physicists at the University of Konstanz have directly demonstrated vacuum fluctuations. With a very short laser pulse in the range of a femtosecond , effects were measured that can supposedly only be explained with the help of vacuum fluctuations. Leitenstorfer and colleagues come to the conclusion that the observed effects were triggered by virtual photons . The mathematician Arnold Neumaier takes a critical look at this article in his popular science forum post. He emphasizes that the use of vacuum expectation values in the quantum mechanical formula used is not an indication of vacuum fluctuations, since these expectation values ​​will appear in all calculations as long as they are carried out in a perturbative setting. In non-disruptive lattice field theoretical studies , no one saw the slightest trace of vacuum fluctuations.