In particle physics, pair formation , also pair creation , is understood to mean the formation of a real, observable particle - antiparticle pair. The always existing virtual, only indirectly observable pairs (see vacuum polarization ) are generally not meant by the term.

In a narrower sense, pair formation is understood as the - historically first known - generation of an electron - positron pair from an energy-rich photon . Today, however, for example, the formation of are muon - antimuon - or proton - antiproton pairs known. In any case, the process only occurs when the available energy is at least equal to the sum of the rest energies of the particles to be generated.

The opposite process in which a particle-antiparticle pair is destroyed is called annihilation .

DESY bubble chamber holder; a pair formation is marked in color. The green path of the photon is not observed directly, but is reconstructed from the spiral-shaped paths of the charges. 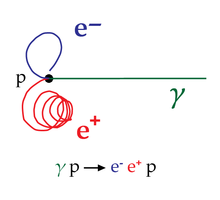 The characteristic trace of pair formation in the bubble chamber image shown above. In a strong magnetic field, the orbit of the two charges is formed into spirals with opposite directions of rotation.

The generation of an electron-positron pair from a high-energy photon was experimentally demonstrated in 1933 as the first pair formation process by Irène Curie and Frédéric Joliot . This pair formation represents an important process of the interaction of photons with matter . B. in bubble chambers to characteristic traces. A distinction is made between two cases: The pair formation can take place through the interaction of a photon with the electric field of an atomic nucleus or a shell electron .

Interaction of a photon with an atomic nucleus

If the pair formation takes place in the field of an atomic nucleus, almost the entire energy of the photon is converted into the mass of the two resulting particles and their kinetic energy . The energy of the photon must therefore correspond at least to the sum of the rest energies of the electron and positron. The recoil of the atomic nucleus, in whose field the pair formation takes place, is also included in an exact energy balance. The threshold energy for pair creation is therefore

is therefore approximately 1.022 MeV ( gamma radiation ). If the photon has a higher energy, this is converted into the kinetic energy of the electron and positron. The probability of pair formation increases proportionally to the atomic number of the atomic nucleus and the logarithm of the photon energy.

The fact that the formation of an electron-positron pair is only observed when the photon interacts with a particle (here the atomic nucleus), but not in a vacuum, can be explained by the generally valid conservation of momentum. In addition, the following thought experiment for the limiting case of a photon energy of even , with which the kinetic energy of the generated particles is zero: In the rest system of the two particles created by pair formation, these together have a momentum of zero. However, a photon has the same vacuum speed of light c in every reference system and thus also an impulse of the size in this system . Therefore, the two particles with their total momentum of zero cannot be the only particles present after the process. Rather, the pairing only takes place when an additional particle, in this case the atomic nucleus, picks up the momentum.

Interaction of a photon with an electron

If the pair formation takes place in the electric field of an electron in the atomic shell, this electron with its low mass is strongly accelerated by the transmitted momentum and released from the atom. Because of the three free particles (two electrons and one positron) this process is also called triplet formation .

If the equation is solved for , the threshold energy results

Of this, the amount is required for the formation of the electron-positron pair, while the remaining energy is also transferred to the three particles as kinetic energy.

Real electron-positron pairs can also be generated through collisions of very high-energy photons with one another. This was first demonstrated in 1997 with an experiment at the Stanford Linear Accelerator Center . The photons of a Nd: glass laser were in turn brought to GeV energies by scattering on electrons of 47 gigaelectron volts (GeV). Such a generation of matter through photon-photon collisions is assumed for some star formations.

During the transition of an excited atomic nucleus to a state of lower energy, an internal electron-positron formation can also occur if there is a sufficient energy difference. It can be observed especially with light nuclides if a gamma transition is made difficult (“prohibited”) by a large angular momentum difference .