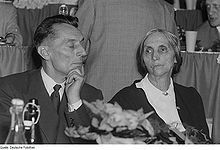 The Joliot Curies in East Berlin at a congress of the World Peace Council in 1952 , photograph by Roger & Renate Rössing .

Irène Joliot-Curie (born September 12, 1897 in Paris ; † March 17, 1956 there ) was a French physicist and chemist . She and her husband Frédéric Joliot-Curie received the Nobel Prize in Chemistry in 1935 for the discovery of artificial radioactivity . She was the daughter of Marie and Pierre Curie , sister of the writer Ève Curie , mother of the nuclear physicist Hélène Langevin-Joliot and the biochemist Pierre Joliot . 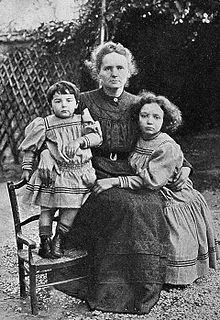 Irène (right) with her mother Marie Curie and sister Ève (1908). Shortly before (1906) the young family had lost their father in a tragic accidental death.

Irène Curie was the older daughter of Nobel Prize winners Marie and Pierre Curie. When she was eight years old, her father died . She grew up under the care of her grandfather Eugène Curie, who mainly influenced her political views. Her mother Marie Curie first organized a learning cooperative together with scientist friends, in which they taught their children themselves. Among other things, Marie Curie demonstrated physical experiments and Paul Langevin taught mathematics. Irène later attended the Collège Sévigné. 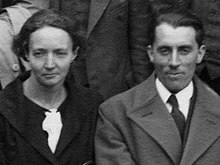 Irène and Frédéric, in London in 1934

During World War I , Marie Curie organized a mobile X-ray service for the front. At first Irène, then 17, helped her mother as an assistant, but soon she was running an X-ray unit in the military hospital in Amiens . In addition, she studied mathematics and physics at the University of Paris and graduated in 1920 both trays with the licentiate from. After the war, she first became an unpaid research assistant at her mother's Radium Institute, and later she was given a post as assistant. At the institute she also met a chemistry lab technician named Frédéric Joliot , whom she was supposed to guide. The two married on October 9, 1926. Frédéric made up his Abitur, which he had not been able to complete because of the war, did his licentiate and received his doctorate in 1930. The first child Hélène was born in 1927, and their son Pierre in 1932. In 1935 Irene and Frédéric Joliot-Curie received the Nobel Prize in Chemistry together.

Irène Joliot-Curie (seated, second from left) at the Solvay Conference in 1933. Her husband, Frédéric, stands behind her; Her mother Marie Curie is sitting three places further .

Irène Joliot-Curie was heavily involved in politics. In 1934 she and her husband took part in an action committee of anti-fascist intellectuals for the first time. In the spring of 1936 the Popular Front under Léon Blum won the elections. The Nobel Prize laureate entered the government as State Secretary for Science and Research and was one of the first group of three women ever to be appointed to the cabinet in France - at that time women in France did not even have the right to vote . Irène Joliot-Curie stayed on for only three months; it was her aim to set an example for the women's movement .

In 1937 she was appointed to a lectureship at the Sorbonne . After the occupation of Paris by German troops, the couple fled to Clermont-Ferrand in June 1940 , but returned to the capital. In Paris her husband played a risky double role as a researcher at the Collège de France and as a resistance fighter . The Nobel Prize laureate had already contracted tuberculosis in 1935; on June 6, 1944, she and her children traveled to Switzerland to have a new attack of tuberculosis treated.

On October 18, 1945, the Commission for Atomic Energy (CEA) was founded in France , as its first high commissioner Frédéric Joliot-Curie was appointed. His wife became one of three commissioners. Because she continued to be politically active in organizations close to the communists, her term of office was not extended. Between 1951 and 1954 she applied four times for a seat in the Academy of Sciences in order to denounce the misogynistic tradition of this institution. It was rejected every time.

Irène Joliot-Curie died in 1956 of leukemia, probably as a result of her handling large amounts of polonium and her work in the X-ray service during the First World War. The government ordered a state funeral.

In her doctoral thesis at the Radium Institute in Paris, Irène Curie examined the alpha rays emitted by polonium ; this radioactive element was discovered by her mother Marie Curie in 1898 (awarded the Nobel Prize in Physics in 1903). To do this, Irène Curie had to extract the polonium from crushed radon vials that had been used for cancer therapy. She succeeded in precisely measuring the initial speed of the alpha particles, for which she used, among other things, a device she had designed herself. In 1925 she received her doctorate.

Since 1928 Irène and Frédéric Joliot-Curie experimented together. In 1931 they repeated an experiment that Walther Bothe and Herbert Becker had carried out first: They irradiated thin layers of different materials with alpha particles from a strong polonium source. If these materials contained hydrogen, a new radiation was created, which the two interpreted as ejected hydrogen nuclei, i.e. protons - they had just missed the discovery of the neutron . The English physicist James Chadwick only succeeded in doing this when he repeated the experiments. For this he received the 1935 Nobel Prize in Physics.

In 1932, the researcher couple observed positively charged electrons in a cloud chamber , but could not classify this result and interpreted it as an artifact. They did not know that the English physicist Paul Dirac had predicted the positron as the antiparticle of the negatively charged electron as early as 1931 - which says a lot about the relationship between theorists and experimental physicists at the time. In 1933 they revised the interpretation of their experiment, but the American Carl David Anderson had already anticipated them.

From 1933 onwards Irène and Frédéric Joliot-Curie succeeded in discovering artificial radioactivity, for which they were awarded the Nobel Prize in Chemistry in 1935. There are different versions of all chemical elements - so-called isotopes - which differ only in the mass of the atomic nucleus. Most chemical elements are stable in everyday life because the half-lives of their radioactive isotopes are so short that they have long since decayed. Marie Curie had discovered the first two radioactive elements, polonium and radium . Irène and Frédéric Joliot-Curie have now found out in several stages that radioactive isotopes of chemical elements can also be produced artificially . To do this, they irradiated aluminum foil with alpha particles, forming a stable silicon isotope. Strangely, during this process, a neutron and a positron were apparently emitted at the same time. On January 11, 1934, Frédéric Joliot-Curie succeeded in the decisive experiment with which he was able to show that, in reality, two reactions took place in quick succession: First, aluminum-27 was converted into radioactive phosphorus-30 under bombardment with alpha particles ; a neutron was emitted. Immediately thereafter, phosphorus-30 disintegrated into silicon-30 and emitted a positron (this reaction also produces a neutrino , which had already been predicted by Wolfgang Pauli , but was not observed until 1956).

This time Frédéric and Irène Joliot-Curie immediately grasped the scope of their discovery. Over the weekend they artificially generated a radioactive nitrogen isotope from boron and a radioactive aluminum isotope from magnesium . On January 15, 1934, they presented their results at the Academy of Sciences .

In 1937, Irène Joliot-Curie almost discovered nuclear fission in another experiment . Together with the Serbian physicist Paul Savitch, she irradiated uranium with neutrons and registered a new type of radioactive element with a half-life of three and a half hours, the chemical identification of which, however, proved extremely difficult. The two researchers published their observations in July 1938 and interpreted them as a possible evidence of the element with the atomic number 93 (and therefore as transurane ). A Berlin working group led by Otto Hahn and his assistant Fritz Strassmann repeated the experiment a few months later and was able to demonstrate nuclear fission (see the main article, Discovery of Nuclear Fission ).

Irène Joliot-Curie's work was interrupted by the Second World War and a tuberculosis disease. After the war, she made sure that the first French accelerator, a synchro cyclotron for protons, was built in Orsay , 25 kilometers south of Paris. In 1950 she and her husband became a corresponding member of the German Academy of Sciences in Berlin . As early as 1947, both were admitted as corresponding members to the Academy of Sciences of the USSR . The Maria Curie Skłodowska University in Lublin awarded her an honorary doctorate in 1950.