Hyperthyroidism was first described by Caleb Hillier Parry in 1786 . Like other doctors of his time, such as Carl von Basedow and Robert James Graves , however, he did not establish a connection between the symptoms and a disease of the thyroid gland. Only in 1886 did Paul Julius Möbius prove this reference. The surgeons Paul Jules Tillaux (1880) and L. Rehn (1884) succeeded in curing the disease by surgical removal of parts of the thyroid gland (thyroidectomy) and thus by reducing the amount of secretion-forming tissue.

At the beginning of the 20th century, X-rays were used to treat hyperthyroidism or the thyroid gland was peppered with radium , that is, small rods made of radium were inserted directly into the thyroid gland. In 1942 Saul Hertz and Arthur Roberts used radioiodine therapy for Graves' disease for the first time , and in 1943 Edwin Bennett Astwood described the use of the substance 2-thiouracil to treat hyperthyroidism: the first anti -thyroid drug .

In the 1980s, a special form of alimentary thyrotoxicosis was observed in the USA , which has become known as hamburger thyrotoxicosis . This condition can be caused by the consumption of ground beef contaminated with thyroid hormones or by sausage in dogs and humans.

The thyroid gland needs iodine to build up thyroxine and triiodothyronine . The adult iodine requirement is around 200 μg per day. In Germany, iodized table salt generally ensures sufficient iodine intake. The iodine supply of the population of Germany was described in 2004 by the World Health Organization (WHO) as "optimal" due to the average iodine excretion in the urine. The amount of hormones produced fluctuates considerably within the group of people with healthy thyroid gland (normal population), which means that the reference range of the laboratory results is relatively large. The fluctuations in measurements with the same person are much smaller. The thyroid hormones (T 3 and T 4 ) released from the thyroid gland into the blood are mostly bound to different proteins (mainly TBG , TBPA and albumin ) and are biologically inactive. Only about 1 ‰ of the thyroid hormones in the blood circulate freely (fT 3 and fT 4 ). The thyroid hormones increase the basal metabolic rate , the sensitivity of the heart to catecholamines , calcium and phosphate metabolism as well as the excitability of muscle and nerve cells and inhibit the formation of new proteins and glycogen .

The overactive thyroid can be classified according to cause and severity. 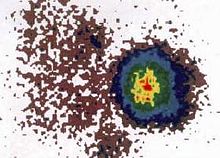 The thyroid gland autonomy , in which the influence of the normally regulating TSH missing on the hormone release in parts of the thyroid gland, especially in the elderly is a common cause of hyperthyroidism. Even in a "healthy" thyroid gland, certain areas are autonomous , that is, they work independently of the physiological regulatory mechanisms. If the thyroid gland enlarges due to iodine deficiency ( iodine deficiency goiter ), the autonomous thyroid portion can become relatively large. Hyperthyroidism due to thyroid autonomy is then based on two factors: the development of a large amount of autonomic tissue (often over years) and then a sudden high intake of iodine ( contrast media containing iodine or medication, especially amiodarone ). In the thyroid autonomy, a distinction according to the representation in the Schilddrüsenszintigramm the unifocal ( autonomous adenoma ), multifocal and disseminated autonomy.

Hyperthyroidism caused by the combination of autoimmune thyroid disease and thyroid autonomy is known as Marine-Lenhart syndrome .

A critical, life-threatening exacerbation of an overactive thyroid gland (thyrotoxic crisis) is possible in any form of hyperthyroidism, regardless of the cause; it can develop unexpectedly and rapidly within a few hours or days. The triggers are larger amounts of iodine that were ingested by the body of the person affected one to four weeks before - rarely even further back - (often iatrogenic by administration of iodine-containing drugs, for example amiodarone , or X-ray contrast media ), the discontinuation of anti-thyroid drugs , operations (especially not in euthyroid conducted Strumaresektion ), but also considered other comorbidities.

The totality of the typical symptoms of hyperthyroidism is also known as hyperthyroidism. About four out of five affected patients have goiter . If the goiter is well supplied with blood, a whirring noise can be heard with the stethoscope . Insomnia, irritability, nervousness and tremors (subtle tremor ) are also typical as signs of general psychomotor restlessness. In addition to an increased blood pressure amplitude (difference between the systolic and diastolic measured value), the cardiovascular system also shows changes in the heart's activity ( sinus tachycardia , extrasystoles , atrial fibrillation ). Despite cravings , the increase in the basal metabolic rate can lead to weight loss. A pathological glucose tolerance , possibly even hyperglycaemia due to the mobilization of fat and glycogen reserves, is also possible. In addition, heat symptoms (heat intolerance, sweating, warm damp skin, possibly a slight fever), increased stool frequency, weakness of the muscles, osteoporosis (negative calcium balance), fatty liver , hair loss and menstrual disorders up to temporary infertility are typical.

The x-ray of a pronounced goiter that narrows the windpipe , causing shortness of breath and stridor .

In immunogenic hyperthyroidism of the Graves type, the noticeable protrusion of the eyeballs from the eye socket ( exophthalmos ) is probably the best-known symptom ( endocrine orbitopathy ). The combination of exophthalmos, goiter and tachycardia is known as the Merseburg triad . The cause of the orbitopathy is an accumulation of glucosaminoglycans in the connective tissue of the eye socket. By the same mechanism, myxedema can develop in the extremities . Acropachia (skin changes on the fingers and toes) can also occur rarely.

The symptoms shown are typical, but in the majority of patients, especially older people, only some of the symptoms appear.

The critical, life-threatening exacerbation of an overactive thyroid (thyrotoxic crisis) is clinically divided into three stages (according to Herrmann): 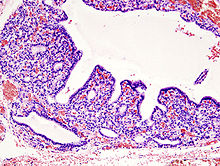 In hyperthyroidism, the histopathological picture of diffuse hyperplasia of the thyroid gland

Since hyperthyroidism is defined by an excess of thyroid hormones, laboratory diagnostics play a decisive role in addition to anamnesis , clinical symptoms and imaging procedures (especially sonography and scintigraphy ) . On the other hand, since the clinical symptoms do not always correlate with verifiable laboratory changes, on the one hand symptom-free patients can also have pathologically changed measured values ​​and on the other hand life-threatening conditions can occur even with moderate changes; Therefore, the Burch-Wartofsky score was developed in order to be able to assess the probability of a thyrotoxic crisis being present independent of laboratory values .

Typically, in hyperthyroidism, the thyroid gland produces too much thyroid hormones. The organism tries to reduce production through the thyrotropic control loop by minimizing the TSH release. The sole determination of the basal TSH level in the blood is therefore suitable as a screening parameter. If this is normal, no further determination of thyroid hormones is required in clinically normal patients.

Ultimately, evidence of manifest hyperthyroidism is an increase in free triiodothyronine (fT 3 ) or thyroxine (fT 4 ) together with a decrease in the TSH level and the corresponding clinical symptoms. When interpreting the laboratory results, it should be noted that there are isolated T 3 hyperthyroidisms without increased fT 4 , in extreme iodine deficiency the TSH level is normal, but fT 3 is increased and fT 4 is decreased, and in the case of latent or compensated hyperthyroidism despite normal fT 3 and fT 4 levels the basal TSH level may be lowered.

Further laboratory parameters are available to differentiate the clinical picture. Thyrotropin receptor autoantibodies (TRAK) show with high specificity whether it is an immunogenic hyperthyroidism ( Graves disease ). If an increased iodine load is suspected as the cause, the iodine content of the urine can be determined. An increase in fT 3 and fT 4 without lowering the basal TSH level is typically found in so-called “central hyperthyroidism” (for example caused by a TSH-producing pituitary adenoma ). These examination options are also used in the "thyrotoxic crisis"; others only play a role in special cases and are presented in the respective main article.

Treatment depends on the cause of the hyperthyroidism. No causal treatment is known. A basic distinction is made between medicinal , surgical and radioiodine therapy .

In drug therapy, those affected are prescribed thyreostatics , which inhibit the formation of thyroid hormones, in high doses until the laboratory values ​​normalize (euthyroidism). Sulfur-containing anti-thyroid drugs ( propylthiouracil , carbimazole , thiamazole and others) are often used, but they have an effective latency of around one week; if a rapid onset of action is required, sodium perchlorate , which inhibits the absorption of iodine in the thyroid, can be used. Anti-thyroid drugs are ineffective in hyperthyroidism caused by inflammation of the thyroid gland ( thyroiditis ), as they cannot influence the release of the hormones stored in the thyroid gland ("preformed hormones") through the inflammatory process. Propranolol (a non-cardioselective β-receptor blocker ) is used as a supplement in tachycardia, but also alleviates the non-cardiac symptoms of hyperthyroidism and inhibits the conversion of T 4 to T 3 .

In the field of rational phytotherapy , treatment with an extract from lycopic herb (Lycopi herba) may also be considered if the thyroid is slightly overactive.

The aim of surgical therapy is to permanently prevent the recurrence of hyperthyroidism. The prerequisite is a previous, successful medication normalization of the laboratory values. The thyroidectomy (complete removal of the thyroid gland), in a carcinoma , the treatment of choice. If there is a benign enlargement of the thyroid gland , subtotal goiter resection is used; the residual volume remaining postoperatively depends on the underlying cause of the hyperthyroidism. After the operation is generally for the prophylaxis of a relapse , hormone therapy with oral intake of iodine ( suppressive therapy ) or (thyroidectomy) hormone replacement therapy ( substitution therapy ) for preventing hypothyroidism required.

In many cases, radioiodine therapy is an alternative to surgery after the laboratory values ​​have been successfully normalized with medication. Due to the possible transfer of the radiopharmaceutical into the child's organism, it is contraindicated for pregnant and breastfeeding patients.

Special case of the thyrotoxic crisis

The thyrotoxic crisis is an acutely life-threatening, emergency medical disease. Their incidence in Germany is around 100 to 1100 cases per year, the mortality rate is 90% undetected and, despite intensive medical treatment, still over 20%. Therapy therefore begins immediately with symptom-related stabilization of the vital functions, without waiting for the results of laboratory hormone analyzes.

Patients with the clinical signs of a thyrotoxic crisis should be admitted to an intensive care unit and treated immediately . The therapy generally includes balancing and replacement of fluids, electrolytes and nutrients (increased basal metabolic rate ), if necessary lowering the body temperature, administration of oxygen (O 2 ), possibly antibiotics and thromboembolism prophylaxis . Cardiac symptoms are treated with β-blockers in addition - propranolol is preferred , as it also inhibits the conversion of T 4 to T 3 , which is ten times more effective - and digitization (for heart failure). The antithyroid agents in this case are intravenously given, possibly in addition with sodium perchlorate , lithium ions (inhibiting the release of thyroxine) and bile acid sequestrants (interruption of the enterohepatic circulation of thyroid hormones). In addition, glucocorticoids are administered intravenously , which among other things also inhibit the conversion of T 4 to T 3 . The plasmapheresis as an emergency measure has the possibility of emergency even Strumaresektion diminished. This can be carried out after the vital parameters have stabilized, if possible within the first 48 hours.

Since thyrotoxicosis factitia is caused by the intake of thyroid hormones in too high a dose, a short break in therapy or an adjustment of the hormone dose is sufficient for treatment.

The thyroid uptake of iodine is not only dependent on the TSH level, but is also subject to iodine-dependent autoregulation . Giving large amounts of iodide (several hundred milligrams - the daily requirement of a healthy person is given by the WHO as 200 micrograms) inhibit iodide absorption, hormone synthesis and hormone secretion ( Wolff-Chaikoff effect , after Louis Wolff , 1898–1972, American cardiologist and IL Chaikoff, American physiologist). This effect, which lasts only a few days, was used in the past to treat hyperthyroidism prior to thyroid surgery ("plumming", after Henry Stanley Plummer ).