As cardiac glycosides or cardioactive glycosides refers to a group of agents that are capable of on the heart a the clout increasing (positive inotropic) and lowering the heart rate exercise (negative chronotropic) effect. Chemically, these drugs are characterized in that they contain three rare occurrence in nature deoxysugars, the glycoside of a steroid - derivative (or derivatives of gonane ) are attached. Only digoxin and digitoxin are of clinical significance today . Cardiac glycosides are often also referred to as digitalis glycosides , digitaloids or simply digitalis , based on the thimble , which contains these substances.

The biosynthesis of the genins takes place in plants in the mesophyll of the leaves via the mevalonate pathway , cholesterol and pregnenolone . Cardiac glycosides in plants such as Digitalis lanata experience an additional increase in the content in the leaves through carbon dioxide fertilization .

These steroid glycosides consist of an aglycon , for example digitoxigenin (from a steroid backbone and an unsaturated lactone ring ), which is glycosidically bound to one to four deoxy sugars, for example digitoxose . A five-membered lactone ring (γ-lactone) is called cardenolide , and a six-membered lactone ring (δ-lactone) is called bufadienolide . They are also called cardiotonic steroids. The polarity of the deoxysugars determines the water or fat solubility of the cardiac glycosides, which has considerable effects on absorption when administered orally. Since digoxin has an additional OH group , its polarity is higher than that of digitoxin. Digoxin is therefore more poorly absorbed in the intestine than digitoxin. However, this poor resorption is offset by faster excretion in the kidneys, which means better controllability. In the case of renal insufficiency, the dosage of digoxin must be adjusted, which in turn is not necessary with digitoxin. In older patients with uncertain kidney function, digitoxin is preferred despite its poor controllability. 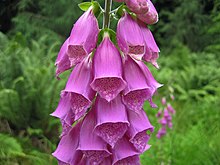 About 200 cardiac glycosides (so-called cardenolides) are known. These can be found in various plant species, but also in some vertebrates (snakes, frogs).

Examples of plants that contain cardiac glycosides are:

Animal species that produce
cardiac glycosides : Cardiac glycosides occur as so-called bufadienolides (e.g. bufalin, marinobufagenin, proscillaridin) in the skin of some toad species as a defense poison. Like the strophanthines, these were used as arrow poisons.

Based on the known steroid structure of the cardiac glycosides, it was assumed that the human body itself can produce such substances. In the past few years at least six such substances have been isolated, most of which are produced in the adrenal gland . Some of these steroid hormones appear to be involved in regulating blood pressure. Well-known isolated endogenous cardiac glycosides are:

Digitalis effect on the heart , an increase in contractile force (positive inotropic ), a reduction in the beat rate (negative chronotropic ), a deceleration or aggravation of the excitation line (negative dromotropic ) and favor by lowering the threshold, the energization forming (positive bathmotrop ). They can therefore be used to treat heart failure (nowadays only recommended as a reserve drug in the case of reduced function of the left ventricle) or supraventricular tachycardia , especially tachycardial atrial fibrillation . However, the positive bathmotropic (acceleration of excitation formation) effect of the digitalis glycosides has a disadvantageous effect, which can lead to cardiac arrhythmias and ventricular fibrillation in the event of an overdose . Digitalis preparations are not used as the only medication to control the heart rate in chronic tachycardiac atrial fibrillation.

However, since the heart muscle cells of a person with heart failure contain too much calcium ("calcium overload", which leads to a reduction in contractility), it was until recently an incomprehensible paradox why a further increase in the cellular calcium content can lead to an increase in contractility .

A possible explanatory hypothesis: The α 2 and α 3 isoforms of the sodium-potassium pumps are located, together with the sodium-calcium exchangers, directly above the foothills of the cell's calcium store (sarcoplasmic reticulum). This functional unit is called a plasma mosome. As a result, the local sodium or calcium concentration can only be increased by inhibiting relatively few sodium-potassium pumps through cardiac glycosides, which stimulates the sarcoplasmic reticulum to release significantly larger amounts of calcium to the contractile proteins (for example with every heartbeat) without the total concentration of sodium and calcium in the cell changing significantly. This is more likely to be regulated by the α 1 isoform of the sodium-potassium pump. The plasma mosomes have already been identified for nerve cells and arterial muscle cells (Blaustein et al. 2002 and 1998) and are probably also present in skeletal and heart muscle cells (He et al. 2001, James et al. 1999).

Cardiac glycosides have a further influence on the central nervous system: Central nuclei of the vagus nerve are stimulated and the baroreflex in the brain stem is sensitized. This explains the negative chronotropic and dromotropic effects of cardiac glycosides. These effects already occur in concentrations that are too low to have an influence on the sodium-potassium pump.

Cardiac glycosides are often given in combination with ACE inhibitors and / or beta blockers and / or diuretics.

Both digoxin and digitoxin can be taken as tablets. With digoxin, excretion takes place via the kidneys with a half-life of 1.5 days, with digitoxin mainly via the liver and bile , with resumption in the intestine ( enterohepatic circulation ) leading to a half-life of 7 days. Digoxin is therefore usually preferred in view of its potential toxicity. Digoxin may not be used in cases of renal insufficiency , while digitoxin is only contraindicated in the case of combined liver and kidney insufficiency.

Strophantine is given intravenously due to its poor absorption , but is currently no longer of clinical / therapeutic relevance. It is also eliminated via the kidneys.

As a result of the long half-lives, an initial dose that is higher than the subsequent daily maintenance dose is required for saturation .

Since the strength of the cardiac glycosides can be influenced by many drugs as well as by fluctuating electrolyte concentrations and, moreover, they only have a narrow therapeutic range , they should be used in individual doses with close blood level monitoring. This applies in particular to the digitalis glycosides (digoxin, digitoxin), in which the therapeutic and toxic areas can sometimes even overlap.

In the past, so-called guinea pig units MSE were used to determine the amount of cardiac glycosides , which were derived from the toxic effect on guinea pigs .

After decades of use in medicine in the therapy of the weak “old age heart” (heart failure), cardiac glycosides are increasingly taking a back seat, because it has been shown that they can only have a beneficial effect on the symptoms; an effect on mortality has not been proven. (DIG and RADIANCE study)

Overdose typically manifests itself in cardiac arrhythmias (70%); these are mostly ventricular. In addition, there may be visual disturbances, typically yellow-green vision, but also gastrointestinal side effects (nausea, vomiting).

The intoxication is treated causally by inhibiting further uptake through gastric lavage and administration of activated charcoal , as well as an interruption of the entero-hepatic circulation with colestyramine to increase digitoxin excretion. There is also the possibility of giving digitalis antidote , a Fab antibody fragment from sheep that is directed against digoxin . This antibody can bind and inactivate free glycoside. Since this is an exogenous protein, there is a risk of triggering allergic reactions or even anaphylactic shock when using this antidote , which is why compatibility should be checked using an intracutaneous and conjunctival test before administration .

Further therapy of the intoxication is symptomatic . Above all, electrolyte disorders and cardiac arrhythmias should be balanced.