Hans Bethe was the first of three children of the physiologist Albrecht Bethe , who worked at the University of Strasbourg and was Protestant. His mother Anna, daughter of the medicine professor Abraham Kuhn , was of Jewish descent. He grew up in Strasbourg and Frankfurt am Main , attended the Goethe-Gymnasium in Frankfurt from 1915 to 1916 , the Odenwaldschule from 1918 to 1921 and then the Goethe-Gymnasium again until 1924 and studied physics in Frankfurt am Main from 1924 to 1926. Then he went to Munich for two and a half years and worked for Arnold Sommerfeld , among others , from whom he received his doctorate in July 1928 . His doctoral thesis dealt with the theory of electron diffraction , which has lasting value for the analysis of experimental data. With Sommerfeld he also published a book in 1933 on the electron theory of metals, which is still valid today. 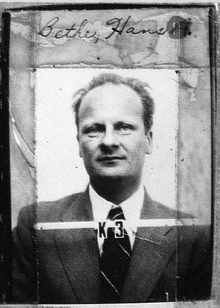 From autumn 1929 until autumn 1933 he was back in Munich, from May 1930 as a private lecturer . Up until 1933, Bethe was given teaching positions in Frankfurt am Main and Stuttgart for one semester each. During this time he also made trips to Cambridge in the fall of 1930 and to Rome in the spring of 1931 and 1932, where he worked with Enrico Fermi . In the winter semester of 1932/33 he represented the associate professor for theoretical physics at the Eberhard Karls University of Tübingen . He lost this position when the National Socialists came to power because his mother was Jewish. Bethe wrote to his academic teacher Arnold Sommerfeld on April 11, 1933: “You will probably not know that my mother is Jewish: According to the civil service law, I am 'not of Aryan descent' and therefore not worthy of being a civil servant in the German Reich. […] So for better or worse I have to face the consequences and try to find accommodation somewhere abroad. ” He emigrated to Great Britain in October 1933 , where he temporarily held the position of lecturer at the University of Manchester in 1933 and 1934. In the fall of 1934, Bethe was an academic teacher at Bristol University .

In February 1935 Bethe received an invitation to the United States , became an assistant professor at Cornell University in Ithaca, and in the summer of 1937 a professor . He stayed there with a few interruptions until the end of his life. During World War II , he first went to the Radiation Laboratory at the Massachusetts Institute of Technology to work on microwave radar . For one summer semester, Bethe was at the University of California at Berkeley at the invitation of Robert Oppenheimer . Bethe then went to the Los Alamos Scientific Laboratory , where he, appointed by Oppenheimer, was involved in the development of the first atomic bomb as head of the theoretical department . In 1941 Bethe became a citizen of the United States.

In 1952, Bethe returned to Los Alamos for six months to (reluctantly, as he said in retrospect) work on the hydrogen bomb . He was an influential government advisor, but from the 1960s he increasingly advocated disarmament. Before the Oppenheimer Investigative Committee in 1954, in contrast to Edward Teller, he stood behind his former boss from Los Alamos.

Other brief absences from his university included Columbia University , Cambridge University , CERN and Copenhagen . In 1957 Bethe became a foreign member of the Royal Society of London and a member of the National Academy of Sciences in Washington, DC In 1975 Bethe retired.

In the 1980s and 1990s he led a campaign for the peaceful use of nuclear energy and also gave general thought to all aspects of energy supply, so that a biography published about him in 1988 bears the title Prophet of Energy . With other US-American physicists like Sidney Drell he expressed himself in the 1980s critical of the "star wars" program , which he thought was easy to circumvent. In 1995, Bethe wrote an open letter to his colleagues asking them to stop working on nuclear weapons . In 2004, he signed together with 47 other Nobel Prize winners a letter that John Kerry for election as President supported the United States and prior to a restriction on the freedom of research by George W. Bush warned.

Bethe died at his home in Ithaca at the age of 98. He was the last survivor of a large line of eminent physicists from the early 20th century. Bethe left behind his wife Rose (* 1917 in Munich , died 2019 in Ithaca), daughter of the physicist Paul Peter Ewald , his son Henry and his daughter Monica.

Bethe was a pioneer in the application of quantum mechanics to various fields of physics. He repeatedly summarized entire areas of physics in handbooks and large overview articles, for example the quantum theory of hydrogen and helium atoms - i.e. the simplest cases of atomic physics - in an article the length of a book in the Handbuch der Physik , reworked in 1957 with Edwin Salpeter , and most recently the theory of supernovae in the Reviews of Modern Physics 1990.

In his early days at Sommerfeld, he dealt with solid-state physics . During this time he wrote a work on the splitting of the energy levels of an atom in crystals (1929) ( crystal field theory ), a monograph on the electron theory of metals , which he wrote together with Sommerfeld in 1933 and which has recently been reissued, and an article of 1931 about spin waves in one dimension, which he solved with the Bethe approach (an important tool in many precisely solvable models of statistical mechanics ). In 1935 he investigated the two-dimensional Ising model (order-disorder transition).

In 1930 Hans Bethe investigated the braking of electrons in matter, which has practical applications, e.g. B. for detectors, and the bremsstrahlung of relativistic electrons ( Bethe-Heitler formula , 1934), one of the early applications of quantum electrodynamics (QED).

A nonsense article with which Bethe and his colleagues Beck and Riezler wanted to parody the work of Arthur Stanley Eddington in 1931 and which they were able to include in a respected physics journal ( Die Naturwissenschaften ) caused a minor scandal at the time.

Bethe gained a reputation as a leading nuclear physicist as early as the 1930s. His series of articles in the Reviews of Modern Physics (1936/37) was considered a standard work at the time (from which his book Elementary nuclear theory with Philip Morrison developed ). At the end of the century (1999) he summarized the developments in this area again in an article in the Reviews of Modern Physics . His work in the field of nuclear physics made him one of the most important collaborators in the Manhattan project during the Second World War , the construction of the first atomic bomb in Los Alamos. From 1943 to 1946 he was director of the department for theoretical physics there .

Even after the war, he kept his leading position in nuclear physics. In 1949 he developed the theory of "effective range" in nuclear reactions. In the 1950s and 1960s he investigated the many-particle problem in nuclear physics using the model of nuclear matter ( Brueckner -Bethe theory, Bethe- Goldstone equation, etc.). In the 1970s he applied the equations of state found for nuclear matter to the study of neutron stars .

In 1947, Hans Bethe gave the first explanation of the Lamb shift of the spectral lines of hydrogen in a first rough, non-relativistic approximation of quantum electrodynamics , which showed that the problem was vulnerable and motivated the relativistic treatment by Richard Feynman and Julian Schwinger that followed soon after .

In 1951 he and Edwin Salpeter described bound states in quantum field theory with the Bethe-Salpeter equation , using the "hydrogen atom" of QED, the positronium (electron-positron pair), and the simplest nucleus, the deuteron (made up of protons and neutrons ), had in mind.

Not least, he received his Nobel Prize for a work on energy generation in stars from 1939: He identified the nuclear reaction chains in stars like the sun that fuse hydrogen to helium, such as the proton-proton cycle in the sun and the more massive ones Star running carbon-nitrogen cycle , which is called the Bethe-Weizsäcker cycle in recognition of his theoretical work .

Bethe remained scientifically active until the end of his life. From the 1970s he turned increasingly to astrophysics and used his extensive physical knowledge, e.g. B. in nuclear physics and the theory of shock waves - which he had already acquired in Los Alamos when investigating the implosion mechanism of an atomic bomb - to investigate the theory of supernova explosions (the star collapses before the explosion). His interest increased when the theory could be tested on the 1987A supernova . In an influential article he enforced the explanation of the “solar neutrino puzzle” by Russian physicists ( MSW effect ) ( Physical Review Letters . 1986).

With such an extensive work, Bethe also made a few false predictions, which he also addresses in his Selected works . For example, in 1935 he thought he had proven with Rudolf Peierls that neutrinos could never be observed, or in 1937 he specified an upper limit for acceleration with cyclotrons , which was overtaken by the invention of frequency-modulated ring accelerators ( synchrotrons ) as early as 1945 ( Edwin McMillan , Weksler ) was. Experiments like Edward Mills Purcell were the reason enough to warn Bethes about “arguments of impossibility” in the “star wars” debate.

In 1947, Bethe was elected to the American Academy of Arts and Sciences . In 1955 he was awarded the Max Planck Medal . He was u. a. Member of the National Academy of Sciences (Washington). In 1961 he received the Eddington Medal from the Royal Astronomical Society for his work on identifying energy production in stars. In the same year he also received the Enrico Fermi Prize . In 1978 he was elected a member of the Leopoldina Scholars' Academy . In 1981 he received the Leo Szilard Lectureship Award . In 1984 he became a member of the " Orden Pour le mérite for Sciences and Arts ". In 1989 he received the Lomonosov Gold Medal of the Russian Academy of Sciences . In 1993 he received the Oersted Medal from the American Association of Physics Teachers . On October 5, 1995 he received an honorary doctorate from the University of Louis Pasteur Strasbourg . He also received honorary doctorates from the Technical University of Munich and the Johann Wolfgang Goethe University in Frankfurt am Main . In 2001 Bethe won the Bruce Medal . The asteroid (30828) Bethe was named after him in 2002. The American Philosophical Society , of which he was an elected member since 1947, awarded him in 2005 with their Benjamin Franklin Medal .

The American Physical Society has been awarding the Hans A. Bethe Prize in his honor since 1998 . Furthermore, the Bethe Center for Theoretical Physics at the Rheinische Friedrich-Wilhelms-Universität Bonn was named after him.

In 1967 he received the Nobel Prize in Physics , becoming the first physicist for a topic from astrophysics (his work on energy conversion in stars from 1938).

O. Klein from the Royal Swedish Academy of Sciences said in his Nobel Prize speech:

“You may have been surprised that from your numerous research papers in physics, some of which were nominated for the Nobel Prize, we selected one that was less related to basic physics than the others and that only occupied you for a short period of your scientific life. This is entirely in accordance with the rules of Nobel Prize awards, and is not intended to imply that we are not impressed with your role in so many other branches of physics since you began research more than 40 years ago. On the other hand, your education about the energy conversion in stars is one of the most important applications of basic physics of our day, which has led us to a deep knowledge of our universe. "