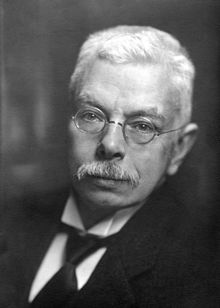 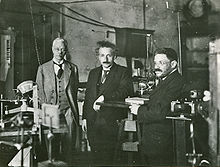 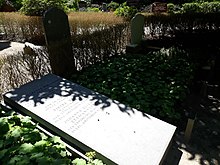 The grave of Pieter Zeeman and his wife Johanna Elisabeth Lebret in the family grave at the Kleverlaan cemetery in Haarlem.

Pieter Zeeman [ ˈzeːmɑn ] (born May 25, 1865 in Zonnemaire on the island of Schouwen-Duiveland , Zeeland ; † October 9, 1943 in Amsterdam ) was a Dutch physicist. In 1902 he received the Nobel Prize in Physics for his services to investigate the influence of magnetism on radiation phenomena .

Zeeman, who came from the family of a pastor, was noticed early on through systematic and careful observations of nature. In the case of the northern lights observed in the Netherlands in autumn 1882 , his notes were mentioned in two publications by his physics teacher in Nature . After finishing secondary school, he studied physics from 1885 with Hendrik Antoon Lorentz and Heike Kamerlingh Onnes at the University of Leiden . After completing his studies, the young physicist initially stayed in Leiden, received his doctorate there in 1893 with a thesis on the magneto- optical Kerr effect and then went to Strasbourg for a semester, where he worked in Friedrich Kohlrausch's laboratory . Then he returned to Leiden to take a position as a private lecturer. In 1897 Zeeman moved to the University of Amsterdam , where he was given a full professorship in 1900 and remained until his retirement in 1935. In 1908 Zeeman was appointed director of the Amsterdam Physics Institute. The laboratory built there was renamed the Zeeman Laboratory in 1940 in his honor.

From 1912 to 1920 Zeeman was secretary of the Royal Netherlands Academy of Sciences , of which he had been a member since 1898.

Zeeman became famous for the discovery of the Zeeman Effect , named after him . As early as 1895, Hendrik Lorentz suspected, based on his electron theory, that under the action of an external magnetic field on the atom, the energy levels of the electrons split the atomic shell and thus the spectral lines. This theory was then examined in depth by Zeeman. In the fall of 1896 Zeeman began his corresponding experimental investigations. He improved his apparatus with regard to the strength of the magnets and the resolving power of his spectroscope and was able to confirm Lorentz's predictions of the splitting into a doublet and a triplet using the blue-green line in the spectrum of the cadmium . On October 31, 1896, he submitted the first of his five essays to the Amsterdam Academy, in which he showed that the spectral lines of a light source split into several polarized components in a strong magnetic field . Through this phenomenon, which is known as the Zeeman effect, he confirmed the electron theory of the interaction of light and matter of his teacher Lorentz. From the shift of the spectral lines in the magnetic field, it was also possible to infer an unexpectedly high ratio of charge to mass of the particle, which was confirmed by the corresponding values ​​for the electron discovered in cathode rays around the same time (1896/7) ( Joseph John Thomson , Emil Wiechert and others) has been confirmed. In a way, Zeeman also has a priority here - while Thomson was examining the free electron, he “discovered” the electron bound in the atom.

The "anomalous" splits of spectral lines into quartets, sextets, octets, etc., which are much more common despite the name, were discovered almost simultaneously and independently by Thomas Preston (1860–1900), Alfred Cornu and Albert A. Michelson in 1898 Lorentz theory cannot be explained. This was called the “anomalous Zeeman effect” and could only be satisfactorily explained from 1925 with the introduction of the electron spin and the development of quantum mechanics.

For their joint research on the influence of magnetism on radiation, Pieter Zeeman and his teacher Hendrik Antoon Lorentz received the Nobel Prize in Physics in 1902

In his birthplace, Zonnemaire, a street was also named in his honor and a bust was erected.