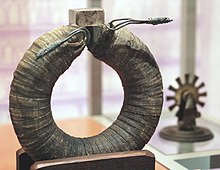 Coil and overlying transparent cuboid, with which Faraday discovered the magneto-optical effect in 1845

The Faraday effect is a magneto-optical effect. It describes the rotation of the plane of polarization of a linearly polarized electromagnetic wave in a medium when there is a magnetic field parallel to the direction of propagation of the wave.

The Faraday Effect was discovered by Michael Faraday on September 13, 1845. It was interpreted as the first experimental indication that light and magnetism are related to one another. That light can be described as an electromagnetic wave was theoretically derived a few years later by James Clerk Maxwell .

Every linearly polarized wave can be interpreted as a superposition of two circularly polarized waves of the same frequency with opposite directions of rotation. If the direction of propagation runs parallel to the magnetic field lines, the refractive indices n left and n right and therefore also the wavelengths differ in many materials . The corresponding formulas are

It follows that the plane of polarization turns around

continues to rotate when a period of oscillation, i.e. the time T = 1 / f, has passed.

Polarization rotation due to the Faraday effect

The Faraday effect occurs in the area of magneto-optics when light passes through a transparent medium. A similar effect that describes the rotation of the plane of polarization upon reflection is the magneto-optical Kerr effect . Most dielectric materials (including liquids) exhibit the Faraday effect when exposed to a strong magnetic field. The rotation of the plane of polarization is greater, the stronger the magnetic flux density.

If the medium has an influence on the plane of polarization even without an applied magnetic field, one speaks of optical activity .

The angle of rotation around which the plane of polarization rotates is calculated as follows:

A positive Verdet constant leads to a mathematically negative rotation if the magnetic field is parallel to the direction of propagation. An anti-parallel magnetic field then leads to a mathematically positive rotation (see picture). This means that for a wave that traverses the medium twice in opposite directions (there and back), the rotation doubles. This is an important difference to the optical activity of left- or right-rotating substances, through which the rotation is reversed when passing through the medium in the opposite direction.

An important application of the Faraday effect is the optical isolator . For these and other applications, materials with a high Verdet constant are used, such as terbium- doped glasses and terbium-gallium-garnet .

There are also magnetometers and current sensors based on the effect , whereby fiber optic cables are used here.

Faraday rotator as a waveguide for microwaves with approx. 9 GHz

The Faraday effect also occurs with premagnetized ferrites and is used in frequency ranges of a few gigahertz in the range of microwaves to build gyrators and to realize Faraday rotators . By rotating the polarization plane, special forms of two-ports for transforming impedances into their dual impedances can be implemented in high-frequency technology .

The Faraday rotator, which in this case is arranged in a waveguide , has two waveguide outputs that are orthogonal to each other, the incoming wave can be switched to one of the outputs by changing the magnetic field through a control line, as shown in the figure opposite.

When radio waves pass through the ionosphere, the movement of unbound electrons in the earth's magnetic field causes the plane of polarization to rotate (see also the refractive index of the plasma ). The angle of rotation is always proportional to the square of the wavelength (β = k · λ²) and is therefore unmistakable in the medium and short wave range. However, a rotation of more than 90 ° can still be observed at 500 MHz over very large distances. At the even higher frequencies of the broadcast satellites , the angle is so small that the vertical or horizontal polarization of the transmission channels is only changed insignificantly.