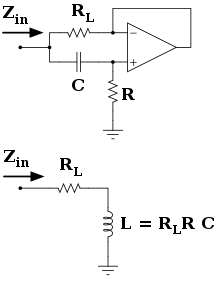 Basic circuit of a gyrator that simulates an inductance. The specified component values ​​in the equivalent circuit diagram below are approximate values ​​for low frequencies assuming R >> R L

In electronics, a gyrator is a two-port that can transform any impedance into its dual impedance . This means that a gyrator shows an inductive input behavior with a capacitive output load. In fact, you can use it to convert a capacitance into an inductance and vice versa. A gyrator is a special type of positive impedance inverter .

Gyrators are implemented as active electronic circuits; the basic circuit can be the negative impedance converter . However, other electronic circuits can also exhibit gyratory behavior, such as negative feedback emitter stages of bipolar transistors in certain operating point ranges. However, for reasons of stability, these gyrators can only be used to a limited extent, since the temperature drift (temperature dependency of the transistor properties ) has a negative effect in this circuit or there are limitations in the operating range. In principle, gyrator circuits can simulate capacitors and coils with fixed or variable and usually unusually high capacitance or inductance values ​​of high quality, which otherwise would not be so easily feasible with the corresponding normal components. The simulated capacitances or inductances can, depending on the gyrator circuit, be effective according to ground or also floating in the application circuit surrounding the gyrator. The disadvantage, however, is that a certain working range (voltage, current) as well as an upwardly restricted working frequency range must be observed for these simulated capacitors or coils, which is caused by the active gyrator components (transistors, operational amplifiers) used by their limit frequencies, phase curves, operating voltages, Output current yields and common mode operating ranges are specified. Gyrators can therefore usually only be used in the small signal range. The inherent noise of the active components used can have a disadvantageous effect. However, gyrators can be well integrated into electronic circuits together with their surrounding application circuitry.

Stable gyrators are implemented in the form of two voltage-controlled current sources, which consist of two operational amplifiers with a current output ( transconductance amplifier ).

In systems theory , a transmission system is called a gyrator if the flow rate at the output is proportional to the potential at the input and vice versa.

Bernard Tellegen made his first publications on gyrators . He coined both the term and the symbol for this component.

Circuit symbol of an ideal gyrator

The ideal model of a gyrator is a linear two-port in whose chain matrix only the secondary diagonal is occupied as follows:

The Gyrationswiderstand ( English gyration resistance ) is the only selectable factor that has the inversion effect. From the chain matrix you can see that a gyrator is a non-reversible two-port, because the determinant is valid . This is why the gyrator is often referred to as anti-reciprocal in the literature . In addition, the forward and backward power ratios are always 1. The ideal gyrator is therefore a lossless passive two-port. It is the counterpart to the ideal transformer .

If the (load) impedance is connected to the output port L of the gyrator, the following (input) impedance is set at the input port E according to the calculation methods of the two-port theory :

In this way he can, for example, convert a capacitance C into an inductance , because the following applies:

A complex gyrator is used in the system analysis of transmission systems. The addition "complex" here refers to the special feature that the flux quantity at the output is proportional to the potential quantity at the input, but there is an additional phase shift. The same applies analogously to the general gyrator in the opposite direction. In complex cases, flux quantities and potential quantities are always changing quantities.

A complex gyrator can be implemented, for example, by two coupled inductors, each of which is connected to a series resonance capacitor and excited with a common resonance frequency.