The title of this article is ambiguous. For waveguides as forcibly cooled electrical conductors in electrical machines, see Turbo generator # cooling .

A waveguide is a waveguide for electromagnetic waves primarily in the frequency range from 1  GHz to 500 GHz. Waveguides are metal tubes with mostly rectangular, circular or elliptical cross-sections. With them, electrical power in the frequency range mentioned can be transmitted with much less loss than with electrical cables such as coaxial cables . Due to their construction, waveguides are preferred for high power or very high frequencies, as there is no need for a conductive center conductor as with a coaxial cable. Since a waveguide can practically only be made of metal such as brass, it is particularly robust against environmental influences, extreme temperatures, vibration or space radiation and is therefore widely used in aerospace, as well as stationary transmission systems on land and on ships. 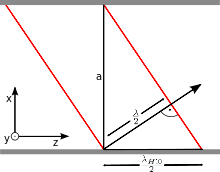 Illustration of the waveguide wavelength

Illustration of the electric field of an electromagnetic wave in a rectangular waveguide in mode TE31; the field strength is shown at the end faces, one side face and at the horizontal section in the middle of the waveguide

In a waveguide, on the other hand, the alternating electric and magnetic fields move:

Waveguides can also be operated with increased internal gas pressure in order to be able to transmit higher powers (in accordance with Paschen's law ) without flashovers or air breakdowns occurring. In this context, the phenomenon of multipaction means the constructive superposition of several different wavelengths, which can result in very high field strengths.

The type of propagation described can take place in such a way that an integral multiple of half the wavelength fits between the narrow sides. The various possible states are the so-called oscillation modes, modes for short, and are denoted by the numbers that correspond to this multiple; so: 1, 2, 3,….

At higher frequencies, the horizontal transversal modes are joined by the vertical ones between the top and bottom of the pipe, where different modes occur independently. Therefore, to describe a mode in a rectangular waveguide, it is necessary to specify two numbers, the mode order : z. B. (2,3) mode . One of the numbers stands for one of the transversal modes in the direction of the electric and magnetic field components (E and H direction).

The field lines of the electric field are always perpendicular to the outer conductor and run from one wall side to the other. Depending on how many extreme values the field course has over the entire width of the waveguide, the mode designation receives its first index. The width of a waveguide is denoted by a. With a maximum, the minimum number for the electrical field distribution, one speaks of a - or wave.

There are also comparable modes in round waveguides. Here, however, there are also modes that have a homogeneous field distribution along the pipe circumference.

The coupling and decoupling of the HF energy takes place through slots, coupling loops, rods, funnels (horn radiators) or holes - depending on whether the energy should get into another waveguide, into a coaxial cable or into the open. The location and shape of these coupling elements determine the mode and direction of propagation of the waves.

Difference between E and H modes

The relationship is non-linear, and for a given mode order and dimensions there is a free space wavelength for which the waveguide wavelength approaches infinity:

The wave cannot propagate in the attenuation area. The coefficient of dispersion is purely real. The wave is accordingly dampened aperiodically. Modes that are not capable of propagation can be excited and at least temporarily bind part of the wave energy. If the frequency of the wave is the same as the cut-off frequency, the propagation coefficient is zero. The wave is reflected at a right angle between the sides of the waveguide without any energy transport taking place.

The wave is capable of propagation for frequencies above the cutoff frequency. The expansion coefficient is ideally and therefore purely imaginary. The wave is therefore not damped, but propagates in the waveguide with a frequency-dependent phase shift . A wave capable of propagation is also damped in the real waveguide. The losses in the waveguide wall (surface currents), which is only finely conductive, contribute to this. The (loss) share of the surface currents in the power transport is mode-dependent, tends to decrease with higher modes and tends to increase due to the skin effect . Since waveguides are usually filled with air or gas, there are no dielectric losses. This is an essential factor for their use at very high frequencies.

The wave impedance links the amplitudes of the electric and magnetic field strengths of an electromagnetic wave. In the waveguide it is frequency-dependent and differs for TM and TE mode, but has the same value everywhere in the waveguide.

where f limit means the cut-off frequency of the respective mode and is the free space wave resistance .

Different waveguides and their modes

Many characteristic properties are common to all waveguide types. This includes a cut-off frequency below which no wave propagation takes place.

Waveguides have a high-pass behavior , with a cutoff frequency. Rectangular and circular waveguides show the basic wave types mentioned below. If these fundamental waves (in relation to H or E waves) have no way of propagating due to the dimensions of the waveguide, no other wave types will propagate either. See also cavity resonator . Above the cut-off frequency, the propagation of the waves ( e.g. group speed , phase speed and wavelength) depends on the frequency. The wave propagation in the waveguide is therefore in principle dispersive .

The following rules apply to the existence of fashions: 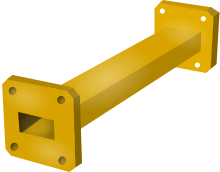 As already mentioned above, the largest dimension is decisive for a rectangular waveguide. This means that the width determines the waves that can propagate in this conductor.

The following applies to the E-wave in the direction of propagation:

where m and n represent the mode numbers ( m : x-direction (transverse) and n : y-direction (vertical) with respect to propagation in the longitudinal direction z). a is the larger dimension of the waveguide. See also Maxwell's equations .

However, the H10 wave is typical for rectangular waveguides.

Thus, the cutoff wavelength is smaller than that of the fundamental wave , which is why the waveguide no longer behaves in a single mode for the mon wave.

Waveguide with an elliptical cross-section 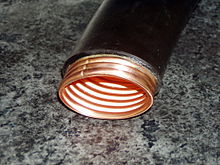 Capacitive feed into a waveguide; in the right picture view from above

The energy can be coupled in or out in various ways in a waveguide. The H 10 wave, which is important for many technical applications , is coupled in by a rod antenna attached at a distance of λ / 4 from the closed end. With capacitive coupling from a coaxial cable, as shown in the adjacent figure, the inner conductor is open, similar to a rod antenna. This arrangement enforces a field maximum of the coupled wave at the coupling point, so that the H 10 wave can only propagate in the only remaining direction.

When a coaxial connection is magnetically coupled to the waveguide, the inner conductor in the waveguide is short-circuited with the rear wall. A field maximum is also generated at the feed point.

When connecting a waveguide to other devices, the electrical resistance must be very low along the entire circumference, as high currents can flow in the wall. A simple pressure contact cannot keep the contact resistance permanently low, which is why a λ / 2 transformation line AC is used in the flange , which transforms a short circuit at A into a short circuit at C (see special case λ / 2 ). A waveguide mode is selected in which there is a voltage maximum at C (see middle picture).

Since only small currents flow in the middle at point B , any contact resistance there has little effect. At this point you can even install an insulating rubber plate in order to fill the waveguide with protective gas. This principle of the resonance seal is also used to seal the door of a microwave oven with high frequency technology.

A waveguide can be terminated without reflections by means of a wave sump .

The first ideas for waveguides and coaxial cables go back to Joseph John Thomson and Oliver Lodge in 1893 and 1894. The first mathematical elaboration of the processes comes from Lord Rayleigh , who suggested around 1897 to remove the inner conductor of the coaxial cables already known at the time so that the electromagnetic wave, guided only through the outer wall, could propagate therein. He described the processes through reflections of the wave on the sheathing, similar to what is the case with fiber optic cables . Rayleigh was also the first to realize that every waveguide must have a lower limit frequency, which is determined by its dimensions. The first practically used waveguides, initially with a circular cross-section, were built in 1932 by George Clark Southworth and J. F. Hargreaves. Waveguides became more widespread with the emergence of military radar technology in World War II . Civil applications, such as communications satellites , followed in the decades that followed.

A waveguide with certain dimensions is only sensibly used in a certain frequency range with less than one octave bandwidth . No propagation is possible below the lower limit frequency and the electromagnetic wave is blindly attenuated; above the upper frequency limit , in addition to the desired fundamental mode, undesired higher modes are capable of propagation. Commercially available rectangular waveguides are available for the following frequency ranges, among others:

Magnetron with waveguide connection from a radar device

A line fan keeps moisture out of the environment, which could distort the adaptation of the waveguide.