This article deals with the German physicist. For the French writer, see Ferdinand Braun (writer) .

Karl Ferdinand Braun (born June 6, 1850 in Fulda , † April 20, 1918 in New York ) was a German physicist , teacher, electrical engineer and Nobel Prize winner (1909, together with Guglielmo Marconi ), who was particularly involved in the development of Heinrich Hertz in 1888 to make experimentally proven electromagnetic radiation usable for communications. 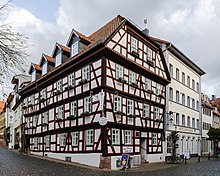 As the sixth of seven children of the Hessian court clerk Konrad Braun, Ferdinand attended the cathedral grammar school in Fulda . After graduating from high school, he studied mathematics and natural sciences at the Philipps University of Marburg in 1868/69 . In 1868/69 he became a Konkneipant , on May 6, 1878 he was a corps bow bearer of Teutonia Marburg . His brothers Philipp and Adolf also belonged to the corps . His oldest brother was Wunibald Braun , the co-founder of Hartmann & Braun .

In 1869 Braun went to Berlin, where he was allowed to work in Heinrich Gustav Magnus' private laboratory , which was considered a special honor. After Magnus' death in the spring of 1870, Braun continued his studies with Georg Hermann Quincke . On string vibrations he obtained his doctorate in physics ( Dr. phil. ) With Quincke in 1872 and followed this as an assistant from 1872 to 1874 at the University of Würzburg . In 1885 Braun married Amélie Bühler from Lahr in Baden; they had two sons and two daughters.

Activity as a teacher

Since Braun had no money to work as an assistant and later a private lecturer , he passed the state examination for high school teachers in Marburg in 1873 and took up a position as a second teacher for mathematics and natural sciences at the Thomasschule Leipzig in the following year . There he also carried out scientific investigations into vibration and current conduction, where he made his first great discovery. He comments on this in the Annalen der Physik und Chemie of 1874: “... with a large number of natural and artificial sulfur metals ... the resistance of the same was different with the direction, intensity and duration of the current. The differences amount to up to 30% of the total value ”.

This rectifier effect on lead sulfide crystals contradicted Ohm's law , but was hardly taken into account. However, it established the scientific reputation of Ferdinand Braun. Despite intensive research, Braun was unable to give an explanation for this effect throughout his life. At that time, the physical basis was still missing - this was only possible in the 20th century with the knowledge of quantum physics . He is thus still considered the discoverer of semiconductors - diode in the 1874th

During his time in Leipzig, Braun wrote his only book: “The young mathematician and natural scientist - an introduction to the secrets of numbers and wonders of arithmetic”, which appeared in 1876 and had several editions, most recently in 2000. He wanted to arouse his students' interest in the mathematical and physical laws of nature.

Activity as a professor

In 1877 Braun was appointed associate professor for theoretical physics in Marburg. He went to Strasbourg in 1880 and was given a full professorship for physics at the University of Karlsruhe in 1883 . Here he developed the electric pyrometer in 1884 . In 1884 he received a call from the Eberhard-Karls-Universität Tübingen and from April 1, 1885 worked there in a leading position in the establishment and development of the Physics Institute. Here in 1887 he also described the Le Chatelier- Braun principle ( principle of the smallest compulsion ) and developed the Braun electrometer . Shortly afterwards, in 1889, the first demonstration of the Braun tube , which still had a cold cathode and only had a slight vacuum. In 1895 he became director of the Physics Institute and professor at the Kaiser-Wilhelms-Universität Strasbourg . After the invention of wireless telegraphy in 1898, he was one of the founders of Funkentelegraphie GmbH in Cologne. A short time later, in 1903, he co-founded the Telefunken company in Berlin. In 1905/06 he was rector of the University of Strasbourg. In 1906 he was involved in the development of the first crystal receiver.

Braun was regarded by his students as a master of comprehensible lectures and of experiments that were spectacular even for laypeople, a style that had already been shown in his aforementioned textbook “ The Young Mathematician and Natural Scientist ”, the content of which is relaxed and sometimes humorous. He also wrote numerous articles for the satirical magazine Fliegende Blätter .

Among his students, Jonathan Zenneck , a pioneer of ionospheric research , as well as Leonid Isaakowitsch Mandelstam and Nikolai Dmitrijewitsch Papalexi, as the founders of Russian high-frequency technology , should be emphasized. Max Dieckmann was a doctoral student and assistant to him. 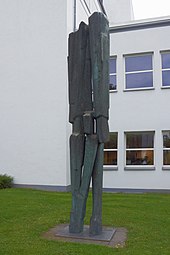 The continuing today notoriety owes its Brown cathode ray tube , which according to him often Braun tube is called. Today it is always understood to be a high vacuum tube in which an electron beam can be deflected horizontally and vertically. The first version, it was made in Strasbourg in 1897, was nowhere near as perfect: it only had a cold cathode and a moderate vacuum, which required 100,000 V acceleration voltage in order to be able to detect a trace of the magnetically deflected beam. The magnetic deflection only affected one direction, the other was via a rotating mirror set up in front of the illuminated area. However, the industry was immediately interested in this invention, which is why it could be further developed immediately. As early as 1899, Braun's assistant Zenneck introduced tilting vibrations for magnetic Y deflection, later hot cathode, Wehnelt cylinder and high vacuum followed. This tube could not only be used for oscilloscopes , but was also used for the first time by Manfred von Ardenne as a fundamental component in the first fully electronic television transmission on December 14, 1930, as a so-called picture tube for television sets , although Braun himself described it as unsuitable for television would have.

With the invention of his tube, Braun also began research in the field of wireless telegraphy . One problem in radio technology was a reliably functioning receiver: As a physicist, Braun was used to dealing with reproducible test conditions, but the coherer receivers customary at the time hardly met these conditions . For example, Braun replaced the coherer with a crystal detector , which at the time brought great progress in the sensitivity of the receiver - even if the crystal detector had to be readjusted again and again. Only the electron tube was able to replace the crystal detector, which - in addition to germanium diodes , for example - continued to be used in simple receivers for some time. The first VHF radar systems also used a detector.

The technology-loving Cologne chocolate producer Ludwig Stollwerck founded a consortium in Cologne at the end of 1898 to exploit Braun's patents. Stollwerck brought in 560,000 marks in company capital. After reaching radio communication over a greater distance, the consortium was converted into "Professor Braun's Telegraphie Gesellschaft GmbH", from which Telefunken AG later emerged. In 1900 Stollwerck made contact with Professor August Raps , director of the "Telegraphen-Bauanstalt Siemens & Halske", which later took over the apparatus construction.

On the transmission side, Braun was also able to help radio technology make enormous advances: Guglielmo Marconi had created his transmitter primarily empirically , so that Braun was able to improve it by looking at the physical background. If the oscillatory and antenna circles were originally one, Braun separated these two parts. Now there was a primary circuit, consisting of a capacitor and a spark gap, and an antenna circuit inductively coupled to it, which enabled the energy emitted in this system to be increased.

As early as 1898, systems were so powerful that the term "remote telegraphy" was justified: up to now, if only up to 20 km could be bridged, the distance records rose from month to month. On September 24, 1900, a radio bridge between Cuxhaven and Helgoland was established over a distance of 62 km. On December 12, 1901, Marconi received radio signals from his Poldhu (Cornwall) station on Signal Hill near St. Johns, Newfoundland . Marconi used a transmitter with a Braun circuit. Whether this reception was actually possible is controversial in the literature.

At the same time, Braun tried to replace the pop-spark technology , which only generated damped vibrations. He succeeded with alternators that generated undamped oscillations, while a feedback circuit with electron tubes was not yet successful.

An early problem of radio relay , the targeted alignment of the transmitting and receiving antennas to each other, also preoccupied Braun a lot. He was one of the first to achieve directional radiation .

Braun is considered to be the inventor of the pointer electroscope , which is therefore named after him.

Braun was one of the co-founders of Funkentelegrafie GmbH in Cologne (1898) and the society for wireless telegraphy Telefunken in Berlin (1903). The latter took him to New York at the age of 64 and in poor health: the Sayville radio station, the counterpart to Nauen , was supposed to cease operations due to patent disputes. The process dragged on, whereupon Braun was surprised when the USA entered the war and was therefore not allowed to return.

During the First World War he lived largely undisturbed in Brooklyn as a war internee until he died of an accident on April 20, 1918.

It was his wish to be buried in his hometown of Fulda. Since a transfer was not possible during the First World War, his son Konrad only managed to transfer the urn with the remains to Fulda in 1921. The burial took place on June 4, 1921. Only a few people showed up because the main rally of a diocesan Catholic day was taking place at the same hour. The magistrate was represented by only one subordinate official.