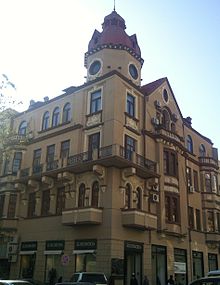 House of the Landau family in Baku , where Lew Landau lived until 1924

Landau was the son of the engineer of the Caspian-Black Sea Joint-Stock Company Dawid Lwowitsch Landau (1866-1943), who worked in the oil fields near Baku . His mother was the pharmacologist Lyubow Harkavy-Landau . He came from the Jewish- Azeri Landau family, from which many well-known rabbis and scholars emerged. Landau finished school in 1921 and studied from 1922 at the physical, mathematical and chemical faculties of Baku University .

In 1924 he switched to the physics department of the University of Leningrad , where he became Abram Ioffe's assistant . Close study friends were George Gamow and Dmitri Ivanenko . Its first publication appeared in 1926. 1929 was Landau a research scholarship that made him Max Born (Göttingen), Paul Ehrenfest (Leiden), Werner Heisenberg (Leipzig) and Wolfgang Pauli (Zurich) led. He also visited Niels Bohr (in Copenhagen, where he was after 1929 also in 1933 and 1934) and Ernest Rutherford (Cambridge). During this time the collaboration with Rudolf Ernst Peierls also developed .

After his return to Leningrad (1931), Landau took over the management of the department for theoretical physics at the Physics-Technical Institute at the University of Kharkov , where he also took over a professorship for theoretical physics at the Institute for Mechanics and Mechanical Engineering in 1933. Basis of merit, he was in 1934, without proof of the dissertation , the doctoral degrees awarded. In 1935 he received a professorship in general physics at Kharkov University.

Landau lived with Konkordija (Kora) Terentjewna Drobanzewa, a chemistry graduate and engineer in a confectionery factory, which he met in Kharkov in the mid-1930s. In 1946, the son Igor was born, and the couple officially married.

In 1937 he followed Pyotr Kapiza's call to the Physics Institute in Moscow, where he took over the management of the theoretical physics department. In April 1938, Landau was arrested by the secret service together with his friends Moisei Korez and Juri Rumer . According to Gennady Gorelik, the reason was an anti-Stalinist (but with socialist pathos ) leaflet that he wanted to distribute with his friends on May 1st. After his dismissal, which came about after courageous interference by Kapiza in 1939 with the head of the secret service Lavrenti Beria , he returned to the Moscow Institute, where he founded a scientific school, which produced several internationally known physicists.

In the late 1940s and early 1950s, he worked on the Soviet hydrogen bomb project . He organized the numerical calculations that were used to successfully predict the energy release of the first Soviet hydrogen bomb (which was built according to the ideas of Andrei Sakharov in the slojka (puff pastry) design). Landau was awarded two Stalin prizes (1949, 1953) and as a hero of socialist work (1954). In the 1950s he was at the Institute for Physical Problems of the Soviet Academy of Sciences (later the Kapiza Institute ). He was still mistrusted by the authorities, for example, despite his high reputation, he was not allowed to travel abroad to the West, and the management of the institute remained with Kapiza. One reason for this was that he didn't mince his words and was often sarcastic.

A serious accident occurred on January 7, 1962: On the way from Moscow to Dubna , Landau's car collided with an oncoming truck on an icy road. Eleven bones and the skull were broken. He struggled with death in the weeks that followed and had to be resuscitated at least four or six times. After three months, Landau woke up from the coma. However, he could never fully recover from the consequences of the accident, and he did not even come close to regaining his creativity, despite the support of his many students and the Soviet physicist community in his recovery. When he was awarded the Nobel Prize in Physics in the same year , he could not accept it in person; Lew Landau ultimately died of the consequences of the car accident six years later on April 1, 1968.

Landau's research group became the nucleus of the world-famous Landau Institute for Theoretical Physics in Chernogolowka near Moscow, founded in 1965 . One of its first members is Alexei Alexejewitsch Abrikossow , who later won the Nobel Prize and who did research there until 1988.

Landau provided work on almost all areas of modern physics. After early research on quantum mechanics and magnetism , he investigated the diamagnetic properties of metals (including Landau quantization ) in 1930 , and in 1935 with Lifschitz he formulated a mathematical representation of the magnetization mechanisms in ferromagnetics and predicted ferromagnetic resonance (see also Landau-Lifschitz-Gilbert- Equation ). In one of his first publications he introduced the density matrix in 1927 (independently of John von Neumann around the same time). While working on cosmic radiation in 1938 he founded the cascade theory of the electron shower. Landau also began research in the field of low-temperature physics in the 1930s . In 1936/37 he developed the theory of type 2 phase transitions (for which superfluids are an example). From 1938 onwards he theoretically explained many of the properties of the superfluidity experimentally discovered by Kapiza in liquid helium-4 , at which a substance loses its viscous properties above a certain, substance-characteristic transition temperature . For example, he predicted the second sound and used phonons and rotons as elementary quasiparticle excitations of superfluids as an explanation. In 1940/41 he formulated the theory of superfluidity on a quantum mechanical basis. In 1950, Landau, together with Witali Ginsburg, set up the phenomenological theory of superconductivity, which summarized the electromagnetic properties of these conductors at extremely low temperatures ( Ginsburg-Landau theory ). In 1956 he developed the theory of Fermi fluids ( Landau-Fermi fluids ) named after him .

Towards the end of the 1950s, Landau was also working with his school on elementary particle theories and quantum field theories, an area that he had previously avoided despite the successes of Richard Feynman and others in the West. Here he and some other Soviet physicists such as B. Isaak Pomeranschuk the discovery of an inherent problem of quantum electrodynamics , the divergence of the coupling constants with increasing energy (or in other words, the "disappearance of the bare charge"). As a result, quantum field theory in general in the Russian school, which was strongly dominated by Landau, was viewed with great skepticism for a long time. After discovering the parity violation of the weak interaction, he proposed the CP symmetry as a new symmetry in 1957 , but in 1964 it was shown that this was also violated.

He also dealt with astrophysics, in 1932 he calculated the Chandrasekhar limit and predicted neutron stars (as Robert Oppenheimer a little later ), before the discovery of the neutron. Landau was also a critic of early star models, for example by Arthur Eddington . In plasma physics, the Landau damping (1946) and the Landau length are named after him. A later obsolete theory of turbulence (Landau-Hopf theory) comes from him (1944) and (independently) Eberhard Hopf and postulated a gradual increase in each new incommensurable frequency in the Fourier spectrum. The theory has long been popular as an explanation of how turbulence (chaos) occurs. In the end, the chaos theory from the 1970s onwards showed that completely different scenarios occur during the transition to chaos (such as strange attractors according to David Ruelle , Floris Takens with, in a certain sense, a finite number of degrees of freedom, but an infinite number of frequencies, period doubling and the fig tree scenario).

Together with Yevgeny M. Lifschitz and later a few other authors, he wrote a ten-volume, trend-setting textbook on theoretical physics (in the USSR from 1938, the first volume was Statistical Physics ), which, as a timeless work of high quality, has a great international influence . The textbook deals with a very broad spectrum of theoretical physics, corresponding to the wide-ranging interests of the Landau School. With its carefully worked out exercises, it also reflects the spirit of physics teaching at the Landau School. Anyone wishing to gain access there had to pass a series of written exams privately at Landau and his employees, the level of which was far above the state examinations (called "Theoretical Minimum" by Landau and his employees). Anyone could be examined by prior arrangement, even without university requirements. The exams consisted of around three, sometimes very difficult, tasks, for which the students each had an hour, with Landau or Lifschitz dropping in every 15 to 20 minutes: Schwieg Landau, that was a good sign, a hmmm denoted dissatisfaction, which after repeated repetition for could lead to premature termination. In total, only 43 students passed the exam. Among his students, among others, Lew Pitajewski , Alexei Abrikosov , Isaac Chalatnikow , Lew Gorkow , Isaac Pomerantschuk , Boris Joffe , László Tisza , Alexander Kompanejez , Benjamin Levich , Evgeny Lifshitz , Roald Sagdejew , Igor Dsjaloschinski , Alexander Pataschinski , Alexander Achijeser , Yakov Abramovich Smorodinski and Semyon Gerschtein . The Landau seminars were also well-known, in which Landau could interrupt with probing questions at any time if anything was unclear, which was formally permitted to others. According to an anecdote, when Landau visited Germany in the 1920s, Albert Einstein also interrupted a lecture when he made a mistake. Einstein thought for a moment, admitted the mistake, and asked the audience to forget what had been said before. Incidentally, Landau held Einstein in high esteem. He classified physicists on a logarithmic scale from 0 to 5 (0 was the highest level), classified Einstein at 0.5, the fathers of quantum mechanics (Schrödinger, Bohr, Heisenberg, Bose, Dirac, Wigner) at 1, himself initially at 2.5, and relatively late in his career at 2.

A moon crater and the minor planet (2142) Landau are named after him.

The Russian Post issued a special stamp in 2008 on the occasion of his 100th birthday .

Lev Landau's life in the Soviet Union provides the thread for the Dau film project by Russian film director Ilya Khrzhanovsky , a work in progress that was due to premiere in Berlin in 2018, but was not approved. The premiere was finally celebrated in Paris on January 24, 2019.

The first German edition was published by Akademie Verlag, Berlin, from 1957 (edited by Gerhard Heber , later Paul Ziesche ). An English edition was published by Pergamon Verlag from 1958. These first editions only went up to today's vol. 8. There is also a two-volume edition Theoretical Physics in Brief , Hanser 1975 (vol. 1 Mechanik, Elektrodynamik, vol. 2 Quantentheorie).