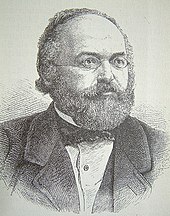 Johann Christian Gottlieb Franz Otto Spamer (born August 29, 1820 in Darmstadt ; † November 27, 1886 in Leipzig ) was a German bookseller and publisher (contemporary publishing house bookseller ) for books and magazines in Leipzig. As an author, he partly used the pseudonym Franz Otto, which was derived from his first name .

After an apprenticeship with Edward salvation in Darmstadt and a few years in which he in Aschaffenburg and in Leipzig with Johann Jacob Weber gathered professional experience, he set out in 1847 in Leipzig as a bookseller independently . The revolution of 1848 took him via Vienna to Turkey . After his return to Leipzig, it took some time for his bookstore to regain a foothold.

His publishing focus lay in the area of ​​family and folk writings as well as children's and youth literature, which were usually richly illustrated editions.

The book of inventions