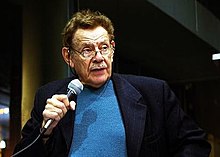 Gerald Isaac "Jerry" Stiller (born June 8, 1927 in Brooklyn , New York ; † May 11, 2020 in Manhattan , New York) was an American actor who formed a comedian duo with his wife Anne Meara for decades. In German-speaking countries, he was best known for his roles in the sitcoms King of Queens and Seinfeld .

Stiller was born in 1927 in Brooklyn , New York, as the eldest of four children of Polish woman Bella Citrin and William Stiller, a bus driver . His paternal grandparents were Austrian Jewish immigrants and his maternal grandparents were Russian Jews . He was married to his colleague Anne Meara from 1954 until her death in 2015 . The marriage gave birth to the children Ben and Amy Stiller , who, like their parents, embarked on an acting career. In 2000 he published his autobiography Married to Laughter: A Love Story Featuring Anne Meara . Jerry Stiller died in his Manhattan apartment in May 2020 at the age of 92 .

Jerry Stiller was already on the stage at the age of ten. He received his Bachelor of Science degree in Speech and Drama from Syracuse University in 1950 . After studying acting he worked for a few years mainly as a theater actor; Among other things, he toured the USA with a production of Peter Pan and made a name for himself as a performer of the comic characters from the works of William Shakespeare . From 1957 he got his first smaller roles in American television.

Together with his wife Anne Meara, Stiller formed the comedy duo Stiller and Meara from 1961 . They initially performed in nightclubs but quickly became popular and featured on various television shows, including several times on the Ed Sullivan Show . From 1979 to 1982 they moderated the film magazine HBO Sneak Previews together . In 1986 Stiller and Meara got their own sitcom The Stiller and Meara Show , but it was canceled weeks later. In it, Stiller played a deputy New York City MP and Meara played his wife.

In addition to their joint appearances, Stiller and Meara continued their solo careers. In 1975 Stiller was first seen on Broadway with Terrence McNally's stage comedy The Ritz , in which he played a bad-tempered gangster . In the film version The murderer lurks in the sauna , he played this role again in 1976 on the side of Jack Weston and Rita Moreno . He also had many guest appearances on television series in the 1970s and 1980s. In 1988 he played the good-hearted husband of Divine in the comedy Hairspray by John Waters , in the remake of 2007 Stiller also had a supporting role. From the film Hot Persuits (1987), Stiller began to appear in several films at the side of his son Ben, including the role of the model agent Maury Ballstein in the comedy Zoolander (2001).

In the early 1990s Stiller's television career got going again with a recurring role in the comedy series Seinfeld . He played Frank Costanza, the belligerent father of Jerry Seinfeld's neurotic friend George. From 1993 to 1998 he played this role very successfully and was therefore nominated for an Emmy in 1997 for best guest actor. In 1998 he received the American Comedy Award for Best Guest Star.

After Seinfeld ended , Stiller planned to retire from show business until Kevin James convinced him to star in his sitcom King of Queens . From 1998 to 2007 he played the role of Arthur Spooner, the eccentric father of Carrie Heffernan (played by Leah Remini ) and father-in-law of Doug Heffernan (played by Kevin James). Stiller's wife Anne Meara had a recurring supporting role on this series. Their children, Amy and Ben Stiller, also appeared in individual guest appearances. After the end of King of Queens , Stiller, who is now over 80, took on a few speaking roles as well as smaller film and television appearances, most recently in 2016 in the movie Zoolander 2 alongside his son Ben.