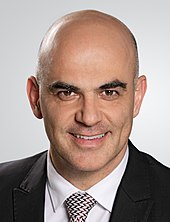 In the function of Chairman of the Federal Council, the vote of the Federal President is decisive in the event of a tie; he makes the so-called "casting vote".

In addition to managing his department , the Federal President only takes on some of the representative tasks of a head of state. Initially, this was only the case domestically: The Federal President gives the radio and television speeches on the New Year and the Swiss National Day on August 1st , and he gives the Diplomatic Corps the traditional New Year reception in the Federal Palace , where he and the respective Apostolic Nuncio in the Switzerland giving small speeches. At a time when there are more international contacts, the Federal President also travels abroad more frequently.

However, since Switzerland does not have a head of state, it is customary not to pay any state visits yourself . When the Federal President goes abroad, he only does so as the responsible head of department. However, if an official visit is made to a head of state from another country, this is usually done by the Federal President; The same applies to appearances alongside several heads of state from other countries, for example in the UN General Assembly .

In the 19th century, the election of the Federal President was an award for particularly valued Federal Councilors. Less influential members of the government, on the other hand, were regularly ignored. Such was the St. Galler Wilhelm Matthias Naeff , which for 27 years belonged to the Swiss government, only once (1853) Federal President.

The choice has usually been undisputed since the 20th century. The unwritten rule applies that the Federal Councilor who has not (or has not) held this office for the longest time to become Federal President. Each Federal Councilor has at least one role in seven years of office. The only question that creates tension in the election is how many votes in the Federal Assembly the person to be elected will receive, which is rated as a popularity test. In the 1970s and 1980s, 200 votes (out of a possible 246) were considered an excellent result. In an era of growing party-political conflicts, there was only one Federal President after 1990 ( Ueli Maurer , 2019) who received more than 200 votes. Therefore, 180 votes have been considered a respectable result since then.

Presidia of other federal state bodies: